#iLookLikeAnEngineer Campaign with a UConn Spin

Earlier this summer, Isis Wenger, a platform engineer at San Francisco-based OneLogin, launched the hashtag #iLookLikeAnEngineer in response to an unexpected backlash after appearing in an ad as part of her company’s recruiting campaign. Reacting to her photo in the ad, one person remarked, “I’m curious people with brains find this quote remotely plausible if women in particular buy this image of what a female software engineer looks like,” perpetuating the stereotype that engineers are, by definition, geeky white and Asian guys. 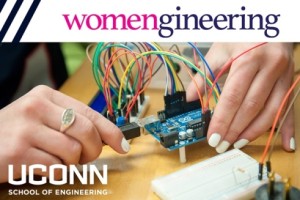 Wenger’s hashtag went viral, igniting a groundswell of women engineers posting selfies and photos on social media bearing the hashtag and captions declaring their engineering specialty, employer and hobbies. Many companies launched their own campaigns with over 100,000 #iLookLikeAnEngineer tweets in the first month and Wenger amassing more than 11,000 Twitter followers in the two weeks following her introducing the hashtag.

So what does this mean? It means that the approximately 20% of engineers who are women are stepping up to debunk the stereotype of appearance and personality. And, in claiming their diversity and pursuing gender parity in STEM, they’re providing all-important role models, a critical aspect for getting girls excited about technology and engineering. Showing girls women engineers who look like them – who aren’t depicted as social outcasts, nerds and geeks – is essential to convincing them that they belong and inspiring them to pursue the field.

On Thursday, September 24 from 2-2:30pm in the Student Union Theatre, a panel of four accomplished women from different facets of the STEM pipeline will explore achieving gender diversity & inclusion in technology and engineering careers.

Register today. Everyone is welcome.

Can’t make it to Storrs? Watch the event from your home or office by tuning in to the livestream. Tweet questions during panel Q&A to @UConnEngineer.

In the meantime, share your thoughts—and photos of you in action—on social media using the hashtags #UConnwomengineering #iLookLikeAnEngineer. Questions? Contact Heidi Douglas, Director of Engineering Alumni Relations, at hdouglas@engineer.uconn.edu.