Improving the Water Supply in a Drought-Stricken Village 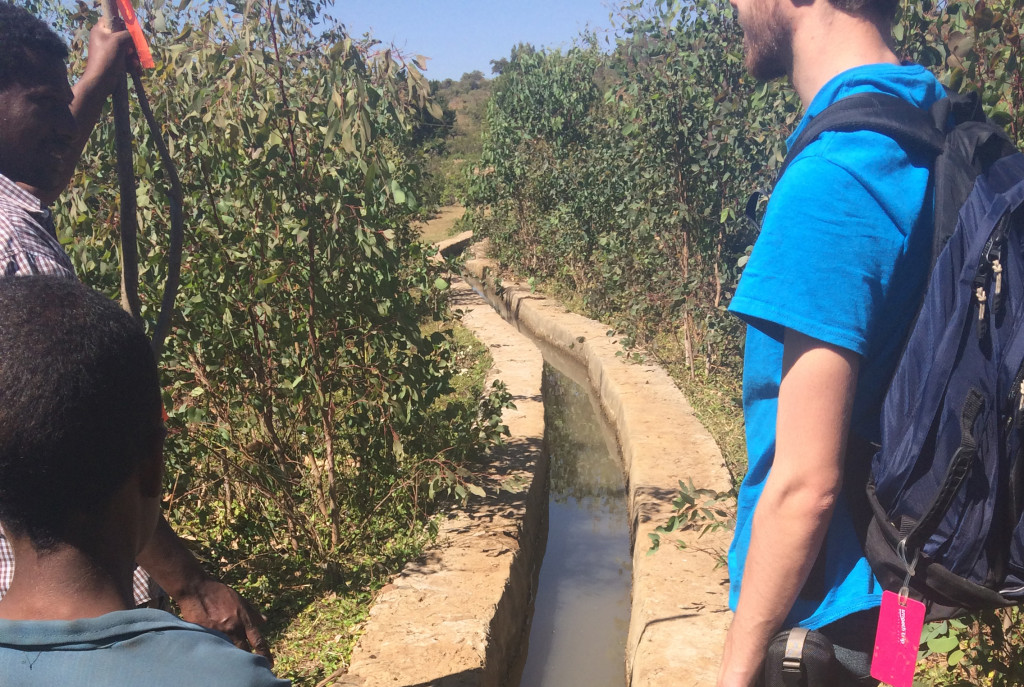 Three UConn engineering students are working in partnership with a village in Ethiopia to help improve the water supply.

During winter break, the three students, who are all members of the UConn chapter of Engineers Without Borders, traveled to the village to begin surveying for a project to improve the community’s water infrastructure. 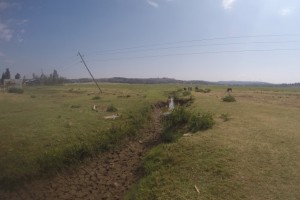 The end of Abba Samual River to the north side of the village. The cracking in the soil indicates that it’s almost pure clay, which makes agriculture and irrigation extremely difficult.

The village, called the Woreta Zuria Administrative Kebele, has an extensive dry season, lasting nine months of the year. The residents depend on agricultural production for their livelihood, and this year is particularly difficult for them, because of the drought that Ethiopia is experiencing.

“The community we’re working in is entirely relying on agriculture for sustenance,” says Kristin Burnham ’19 (ENG, CLAS), a double major in environmental engineering and molecular and cell biology.

Engineers Without Borders (EWB) is a student-led organization that designs and constructs sustainable engineering solutions for low income communities in the United States and abroad.

This project is part of a larger partnership between UConn, the Ethiopian Institute of Water Resources, Addis Ababa University in the nation’s capital, and Bahir Dar University in Ethiopia’s Amhara National Regional State. A senior design team will work to implement the solutions that the UConn students help to design. 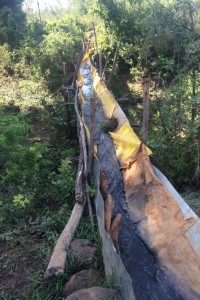 A makeshift aqueduct, constructed by the villagers using plastic tarps, sheet metal, and sticks. The inventive structure is subject to leakage.

Jon Mellor, professor of civil & environmental engineering, who accompanied the trio on their visit in January, explains that the senior design team is working on the technical aspects of the project, while the students are working on the diverse social, logistical, and fundraising challenges of conducting projects in the developing world.

The recent trip was intended to gather as much data as possible to determine how the UConn EWB chapter could help with the town’s water issues. The data gathered will aid in designing solutions that are both sound from an engineering standpoint and fit the cultural needs of the local people.

The trip was funded by a generous donation from United Technologies Research Center, as well as fundraising efforts by the EWB UConn Chapter.

The town’s existing irrigation system runs from the Abba Samual River to the north side of town. The original plan was to build a system to service the side of the town south of the river. When the EWB team realized that the current system wasn’t fully functioning, they looked into rehabilitating that structure as well.

“We’re trying to decide if that system is worth rehabilitating and making it fully functioning,” Mellor says.

To determine the most effective way to address the community’s needs, the team tested the water and soil, surveyed the land, and marked the current irrigation system using a GPS. The Ethiopian Institute of Water Resources also supplied the team with data.

Ryan Cordier ’18 (ENG), a double major in biomedical engineering and environmental engineering, says soil tests were necessary because the plan is to build a structure on top of the soil. “We want to get a look at how the soil is going to move when we put a load on it,” he says.

Adds Burnham, “We also need to know how fast the water is going to infiltrate or absorb into the soil, so we can have an idea of whether it would be feasible to have a liner for the system built with the soil that’s already there or if we need concrete.” 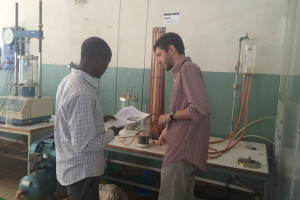 Mamo Kassegn Sisay, left, a researcher with the Ethiopian Institute of Water Resources, and Ryan Cordier ’18 (ENG) measure the permeability of the soil. The cylinders behind them measure how fast water travels through soil.

This year, the strong drought affecting Ethiopia has exacerbated the village’s water problems.

“The precipitation is so variable,” says Mellor. “They typically get irrigation starting in May, but sometimes it comes and sometimes it doesn’t. When it doesn’t come, it is pretty bad news for the community.”

The EWB students aim to address the complex issues in a holistic manner, says Kelsey Reeves ’16 (ENG), an environmental engineering major. She says the work she’s done with the chapter has helped develop her critical thinking skills.

“We basically run the program like a small engineering firm,” she says. “We make sure that what we’re designing is economical, and that it works. What’s really cool about Engineers Without Borders is that we go a step beyond [just an engineering solution]. You have to understand all these cultural and societal factors.

“You may come up with a really great solution to a problem, but if it doesn’t work on the ground, in that society, then it doesn’t matter,” she adds. 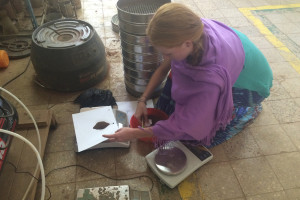 Kristin Burnham ’19 (ENG, CLAS) measures soil samples to later test the soil’s water capacity in a soil lab at Bahir Dar University. The mechanical shaker behind her is used to determine how much rock and gravel are present in the soil.

Reeves has been working on this project from the beginning, and also traveled to the village for an initial assessment with Mellor and a doctoral student last summer. When she graduates this spring, the work will be taken over by Burnham and Cordier, who were voted team officers after their part in this trip.

Mellor says the student group hopes to organize a trip this summer to begin implementing repairs and improvements to the irrigation system. That work will depend on findings from the data that was gathered over winter break.

To support the UConn Engineers Without Borders chapter, contact Jon Mellor at mellorj@engr.uconn.edu.