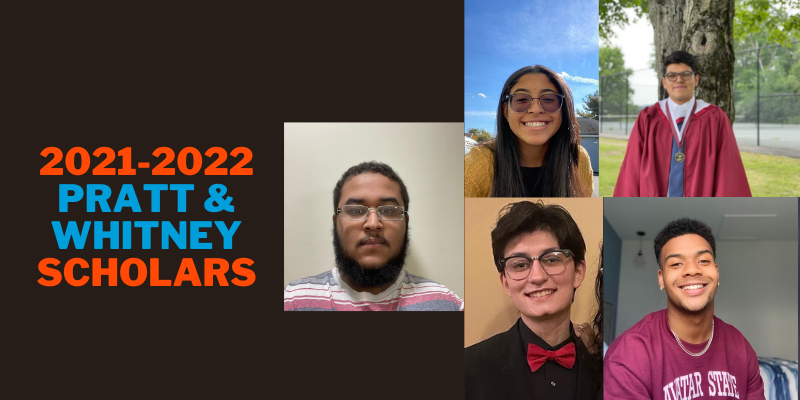 By: Eli Freund, Director of Communications and Marketing, UConn School of Engineering

After an historic investment of $1.25 million from Pratt & Whitney to establish the Pratt & Whitney Scholars program at the University of Connecticut School of Engineering, five undergraduates were chosen from an applicant pool of 75.

The Scholars Program, designed for underrepresented minorities, will provide four cohorts of five students with $10,000 per year for four years; a summer internship opportunity at Pratt & Whitney after their sophomore year; a senior design project sponsored by Pratt & Whitney during their senior year; and professional development and mentorship opportunities.

This new program builds upon more than 30 years of support that Pratt & Whitney and parent company Raytheon Technologies have invested in diversity programs at UConn, including the decades-long BRIDGE program, a five-week summer residential program designed to help women and underrepresented minorities entering their freshman year at UConn Engineering.

The five students, all first-year mechanical engineering majors, come from across the state of Connecticut, with the exception of one student from Florida. Below is a glimpse into their backgrounds and some insights into their experience as an engineer and Scholar.

To be a Pratt & Whitney scholar means the world to me.  It means that a world renowned company located in my home State of Connecticut believes in me and my dream of working in the aviation field.  For as long as I can remember, I have always been fascinated with the idea of air travel and how planes work.  I was raised in the Annex area of New Haven, CT – literally 2 blocks up from Tweed International Airport and my greatest memories would be riding my bike down the street, watching these large objects rise into the air and trying to chase them while on my bike.  I would imagine what the view from above would be like, how excited the people in the planes must be – going to or coming from a new adventure.  I remember seeing Air Force One coming in and how quiet it was compared to the older planes and wondering ‘how cool it would be to learn how to build one of these beautiful machines and make it even better, quieter, sleeker, faster’.  This desire evolved into my passion for mechanical engineering once I realized my curiosity of planes could be a very real career choice.  Once being accepted to the UConn School of Engineering  and Honor program I joined the UConn Air Force ROTC program in the hopes of learning more about working on these planes in the military. Being named a Pratt and Whitney Scholar is an extremely humbling experience that I am so very fortunate and thankful for.  I take this level of faith in my academic potential very seriously to be the best representative of this prestigious, highly respected Aviation Corporation that I can be.

The financial burden to my mother is alleviated tremendously with this generous gift to my education.   As a single mother of four, my mother has taught me to appreciate a positive work ethic and to treat every opportunity as something earned and not an expectation.  I joined as many programs as possible to help me push myself academically while trying to save money. I am so glad that all of my hard work and dedication to my academics are paying off now and I can focus my attention on my studies and not how much my mother has to work to help me achieve my goals.  This generous Pratt & Whitney scholarship gives me the affirmation that I am on the right path and can finally divert my time fully to my education and my future without fear of an extravagant financial burden in the future.

Why did you decide to go to school for engineering? Have your always wanted to be an engineer?

Engineering to me is an art form –  the art of curiosity, learning how things work, evolve and improve is fascinating . This art includes scientific theories from designing, testing, and producing physical structures to create a better product, a better world. My favorite part of engineering has to be the prototyping portion of the process, because you see your project undergo numerous tests; every trial is a step that gets you closer and closer to a better structure and product. Satisfaction comes from solving the puzzle, trial and error, and ultimately seeing the final product succeed. When I was little, looking at planes and rockets in movies, I was unable to imagine how it was possible to get such large objects into the air –  let alone space.  To then see the magnificence of Air Force One coming to my small neighborhood airport in all its glory – discreet, stealth, and fast – I was mesmerized. The idea of having these types of planes being as commonplace to the average person as cars are to us now, was initially thought of as impossible or science fiction 10-20 years ago, however we can totally imagine it now as a very real reality.  I want to be that person who makes these impossible mechanical advancements – possible.

Being named a PW Scholar is honestly such an exciting opportunity. I have always been interested in the work that Pratt and Whitney does and to be associated with the company through this scholar program is truly so amazing.

I think one of the biggest issues regarding students going to college is the financial end of it. This was definitely one of my biggest concerns as I started and now continue through college. These funds help alleviate some stress that I have and it makes me so grateful for the opportunity. Internships and connections are so hard to obtain as a college student, there are so many of us engineers who are willing to work and put in the effort to network with companies. Being able to have the opportunity to work with Pratt and Whitney through this program. It relieves stress knowing that there are options for me in the industry and to learn because of this program.

As a kid, I always had a love for planes and anything aerospace related. Before even applying to UConn, I had no idea that engineering existed and that it could be something that I wanted to do. I always knew I was going to go into STEM but I just never had an idea of what exactly I wanted to do in STEM. I did AFJROTC in high school and fell in love with planes that the Air Force made and used everyday. An instructor explained opportunities of being an engineer to design the jet engines and how they worked and I was sold. I immediately knew what I wanted to go to school for.

It feels amazing, especially knowing that an opportunity like this can relieve adversity with financials and future goals. It means that I’ve been given a sense of security and encouragement that I can become an engineer.

The Pratt and Whitney scholarship really alleviates the burden of removing the financial barrier that can ultimately deteriorate a students morals and goals. Thus allowing me to empower my academic and career goals. It alleviates my parents by not having them put in those extra hours at work.

Ultimately I never really considered even attending university because of my household income. But I took a risk and it worked out perfectly. I’ve never really considered being an engineer but ever since I got into construction with my dad and modifying my first car in high school, it took a turn for the best. I can honestly say that the UConn School of Engineering has been one of the best experiences in my life so far!

To me it means that I have finally succeeded at something and I have a chance to stop worrying. I’ve been worrying my whole life about money, what I wanted to do with my life in the future, and so much more.

Honestly it feels like a weight has been lifted from my shoulders. With the scholarship funds, I do not have to worry about student loans anymore. Money is now one of the last things I need to think about, I now have the chance to focus on my education and building a better future for myself and my family. I can finally breathe.

My first exposure to engineering was from my 3rd grade teacher who brought her husband (an engineer) to talk to us about his job. I remember him mentioning all of the work he did on airplanes and how much fun it was for him. After that, I had other plans like trying to become a lawyer for a few years before realizing that I wanted to go into a field with math and science as the primary subject. I took multiple buzzfeed and other random “what is your dream career” or “your perfect major” quizzes my junior and senior year and always got the same answer, engineering. I was still hesitant about the idea, but I really did want to make a difference in the future and have a hands-on job where I could work with a team to build something extraordinary. I am happy that I decided to stick with the major and am very lucky to have been given this opportunity.

Being named a PW Scholar has confirmed to me that I’m on the right path and has removed any doubt I’ve had about being capable in the engineering field. Having the support of Pratt and Whitney has given me a clearer view of the future I want and has made it seem within my grasp.

It’s no secret that majoring in engineering is not a walk in the park. The major-relevant classes are many and require great dedication both mentally and physically. In addition to these classes are the gen ed requirement classes which more often than not have no relation to the engineering classes and in that sense can be distracting. The costs and logistics of attending a university full time only adds to the stress of being a student in the School of Engineering. The scholarship funds and mentorship will help alleviate some of that stress.

For as long as I could remember I’ve always been fascinated with how things work and why they work. My fascination began with door locks and from there evolved into everything from watches to cars. During middle school I’ve met many engineers, some of which worked at Pratt and Whitney, through career day and my extended community. And ever since I’ve been inspired to pursue engineering as a way to utilize my curiosity.