The Connecticut Invention Convention (CIC) is one of the State’s enduring and quiet educational treasures: an experience that enlightens and delights students, educators and parents alike.  Now entering its 30th year, the program targets grade 1-8 children because this period is rich with opportunity; it’s a time when young minds are beginning to dance with dreams of the future.  With the aim of exciting children about the process of discovery, learning and problem solving, the CIC program has been embraced by 130 schools across Connecticut. [View photos on Flickr here.]

On April 28th, Gampel Pavilion at the UConn Storrs campus teemed with energy and enthusiasm as 650 young inventors, their teachers and parents came to campus to unveil – before teams of evaluators – the inventions they conceptualized, documented, reported on and built. These were the students selected at school competitions to represent their schools and peers. The 29th CIC event was a grand affair that filled not only the floor of UConn’s basketball theater with tabletop displays but also much of the stadium seating with proud families.

The inventors’ road to Gampel was not built in a day.

Schools that participate in th 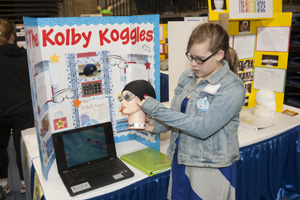 e CIC program begin to prep the student population the day after the statewide convention, according to Carolyn Wheeler, a science and computer teacher at Lebanon Elementary School, who has facilitated the CIC program at the school since 2004. The first Monday after each statewide convention, Ms. Wheeler said she encourages the young inventors to wear their official CIC t-shirts and UConn School of Engineering hats to school and to begin to brainstorm next year’s invention. “CIC has become an institution at Lebanon Elementary School; it’s one of the biggest events of the school year.  And because it’s part of the culture, the children think about it all year,” she noted.

“The kids love it.  They love to apply their creativity, come up with ideas and develop them.” Ms. Wheeler said that although the population of her school has declined overall, participation in CIC has continued to rise each year.  During the 2003-04 school year, she said, just 26 children participated in the Invention Convention at Lebanon Elementary; this school year, 110 students – nearly 35 percent of the student body – participated.  Ms. Wheeler remarked that interest rose steeply after 2008, when one of the school’s students was featured on The Ellen [DeGeneres] Show.  It’s not just interest that rose, she said: the quality of the student inventions and presentations also improved across those eight years.

Though students don’t begin their projects officially until January, throughout the year Ms. Wheeler reminds her students of the invention convention and encourages them to think ahead, to do some detective work around home or in their daily lives to see problems that might need a solution. She sends parents the details of the program and keeps them regularly updated about deadlines, idea generation, and other details via email. “A key to our success has been our strong email communication with parents, because the children actually do all the work at home,” she said.

To help the children better understand what an invention is, Ms. Wheeler brings in props, such as kitchen implements she finds in grocery store aisles, and asks the students what problem the implement solves and to explain the item’s features.  Ms. Wheeler notes that all Lebanon Elementary School students are encouraged to participate in the Invention Convention; often, she said, the best inventions have come from children who may not perform the best academically.

Building excitement for this special program is crucial, she believes, to making STEM subjects attractive. So, she invites not just student inventors and their families to the school convention but also members of the media, state legislators, members of the town council and Selectmen.

This year, 13 students from Lebanon Elementary participated in the statewide convention.  She said that six of the children received a total of eight awards for their inventions.  She was particularly pleased to see that her efforts to entice more female students to participate have been rewarded: more than half of the CIC participants from Lebanon Elementary were girls. Ms. Wheeler commented that for the first time, student inventors were asked to complete a survey.  Of the 62 students from her school who were surveyed, she said, 77 percent expressed positive attitudes toward science, with 19 percent indicating that “science excites me” and over 60 percent indicating that they “would be happy to be a scientist.” It’s little wonder that Ms. Wheeler has been nominated for the 2012 Presidential Award for Excellence in Mathematics and Science Teaching.

Ms. Manzer reminisced about the moment when she first formulated her dream to go into outer space. “When I was your age, going to school in Connecticut, our principal gathered the entire school population into the gymnasium and we watched the very first space shuttle flight. At that point I was hooked. I knew,” she said.  Recalling the many obstacles and difficulties that arose as she strove to breathe life into the dream,  not least the end of the shuttle program, she said “Inventors are creating an invention right now: they’re designing a rocket that anyone…anyone in this audience, can fly into space.”

Dreaming is what inspires invention, she suggested, and to reinforce this important link, she asked the audience to remember the word “dream” as an acronym in which D is for dedication, R is for risk taking, E is for education,  A is for attitude, and M stands for motivation.  Ms. Manzer left the young inventors with words to ponder: “We are creating tomorrow by whatever we are dreaming today.”

The 2012 CIC featured an amazing array of inventions, from Community School fifth grader Ryan Swiski’s “Rockin Convertible,” a rocking chair retrofitted with adjustable legs that can be folded back to allow the rocker to rock, to Lee Kellogg School fifth grader Sean Caiati’s “Laser Re-sight,” featuring a built-in laser and grid mounted on the scope for those times when the telescope gets bumped accidently.  Deklin Casey of Milford’s project applied NASA technology: solar panels, a backup batter, and radiant barrier/reflector for his “Solar Shades” method of cooling and heating the home.  And after suffering through two weeks without power last fall thanks to the tropical storm-Halloween blizzard, Marlborough Elementary School fourth grader Isabelle Benson-Clarke was inspired to devise the “Engineered Green Solar Powered Water Purifier” comprising filtration using plastic buckets, charcoal and solar power.

Operating on Love and Money
The CIC Board – a dedicated all-volunteer team of educators, industry professionals and policy makers – relies each year upon a complex network of sponsors, donors, committed teachers and judges to keep the convention vibrant.  The UConn School of Engineering hosts and co-sponsors the event, and Marty Wood, assistant dean for undergraduate education, serves as CIC vice president.  Associate professor of Civil & Environmental Engineering Ramesh Malla also serves on the Board.

For more information about the Connecticut Invention Convention, to volunteer or to provide sponsorship, please visit www.ctinventionconvention.org.