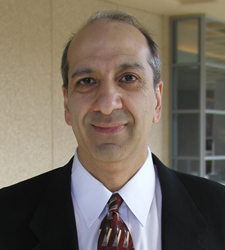 Dr. Bahram Javidi, Board of Trustees Distinguished Professor, was selected to receive one of just six 2008 Helmholtz-Humboldt Research Awards for senior U.S. scientists. It is Germany’s highest research award for senior U.S. scientists and scholars in all disciplines. The award honors individuals whose “fundamental discoveries, new theories, or insights” have had a significant impact on their discipline and who hold promise for continued cutting-edge achievements in the future. Dr. Javidi is invited to spend up to one year collaborating with German researchers in the areas of information optics and three-dimensional (3D) imaging.

In April, he will receive an award certificate signed by the president of the Humboldt Foundation.

Dr. Javidi is a professor of Electrical & Computer Engineering who has gained international recognition for his expertise in the use of photonics in information systems. His activities include optical sensing and imaging for 3D visualization, and 3D display; nano-technology for visualization, identification and recognition of dynamic biological organisms such as bacteria; and processing of information with quantum optics. Dr. Javidi’s research has widespread applications in surveillance, homeland security, bio-medicine and military uses.

Dr. Javidi is Fellow of seven professional scientific societies and the recipient of numerous awards, including the Dennis H. Gabor Award presented by The International Society for Optical Engineering SPIE (2005), the Distinguished Lecturer Award presented by the IEEE Lasers and Electro-optics Society (2004-05), a Presidential Young Investigator Award of the National Science Foundation (1990), and The Engineering Foundation and the IEEE Faculty Initiation Award (1987). He also received the University of Connecticut Chancellor’s Research Excellence Award, The School of Engineering Distinguished Professor Award, and the University of Connecticut Alumni Association Excellence in Research Award. He has received four best paper awards, including the 2008 IEEE Donald G. Fink prized paper award among all (over 130) IEEE transactions, journals, and magazines, and two best Journal Paper Awards from IEEE Transactions on Vehicular Technology. Dr. Javidi was invited in 2003 to participate in the German-American Frontiers of Engineering Symposium of the National Academy of Engineering (NAE), an honor reserved for a select group of emerging engineering leaders aged 30-45.

Dr. Javidi has over 630 publications, including eight books, 44 book chapters, over 250 peer reviewed journal articles, over 330 conference proceedings with over 110 plenary and keynote addresses, and invited conference papers. His papers have been cited over 4,500 times according to the citation index of WEB of Science. Some of his papers have appeared in Physics Today and Nature. He has co-authored scientific publications with over 140 different scientists and engineers from around the globe. Dr. Javidi is Editor-in-Chief of the Springer-Verlag book series, Advanced Sciences &Technologies for Security Applications. He also serves on the editorial boards of the Proceedings of the IEEE Journal, and IEEE Journal of Display Technology.