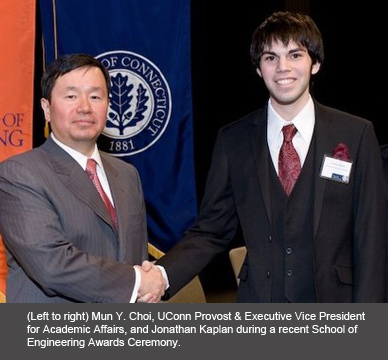 Managed by the Naval Postgraduate School (NPS) on behalf of the Office of the Secretary of Defense, the SMART program is administered jointly by the American Society for Engineering Education and NPS. It was created as a means to increase the number of civilian scientists and engineers working in Department of Defense laboratories.  SMART scholarships provide full tuition coverage as well as stipends to cover all non-school related costs. In exchange, recipients work for a DOD-funded facility for a period equal to the years their education was funded.

As a BME major concentrating in biomechanics, with a minor in materials science, Jon is honing an impressive skill set that caught the attention of one of his core instructors, Dr. Krystyna Gielo-Perczak, as well as the Biomechanics Department of the Natick Soldier Research, Development and Engineering Center located in Natick, MA, where he will work post-graduation.

Dr. Gielo-Perczak took note of Jon’s superior performance in a variety of tough courses. “It has been my pleasure as an educator to observe Jon’s academic growth and to envision his future engineering path.  I am delighted by his passion for creating, learning new concepts and availing himself of the many opportunities at UConn to excel in his educational strategies.  Jon is an outstanding role model for other students, and he exemplifies the proactive, practical, helpful, and capable engineer who is fully equipped to meet future workplace demands while satisfying his own expectations.”

Two years ago, Dr. Gielo-Perczak urged Jon to apply for an internship with the Natick Soldier Center. His bid was successful, and during the summer of 2012 the highly selective center immersed Jon in work aimed at measuring a soldier’s “center of pressure” when wearing different weights, material constructions and designs of body armor, weapons systems, backpacks and helmets. Researchers define the center of pressure on a body as the point at which the “ground force vector” – the cumulative forces acting between a body and its supporting surface – is applied.

Jon explains that the Natick setup included a force platform machine, which measures the soldier’s center of pressure; a sophisticated, highly adaptable treadmill; and a three-dimensional motion capture system. In the testing lab, soldier volunteers don the body armor, or other item being tested, and walk on the treadmill, which features independent panels for each foot and can be adjusted to different inclines to emulate the conditions found in field environments.  As the soldier treads the treadmill, different testing apparatuses measure the soldier’s endurance, speed, balance, response time and other characteristics.

The Natick internship was an exciting opportunity for Jon to apply and expand his biomechanics knowhow.  It also set the stage for his application to the SMART program and planted the seed for his senior design project this year.  Jon’s capstone project is sponsored by Advanced Materials Technology Inc. (AMTI) of Watertown, MA, which manufactures force measurement devices, orthopedic implant testing machines, and other specialty instruments.  The company supplies the Natick Soldier Center with its force platform machines, and Jon’s senior project will involve the design, testing and construction of a prototype calibration device to quantify error in force platform machines.

After receiving his B.S. in May, Jon will intern again at the Natick Center over the summer and then return to Storrs in the fall to enroll in a one-year coursework master’s program. Armed with his dual B.S. and M.S. degrees, Jon will return to Natick Soldier Center as a full-time employee.

Growing up in Maine, where his high school graduating class had just 50 students, Jon was eager to immerse himself in a large college campus.  He chose UConn because of its excellent Biomedical Engineering degree program and large, varied campus population as well as its easy proximity to Boston and New York City.

Jon wasn’t always certain about his engineering aspirations. An accomplished guitarist who toured with bands around the region, in high school Jon was conflicted as to whether he wanted to pursue engineering or music. Pragmatism won out, and Jon is happy with his decision to become a biomedical engineer. During his internship, Jon saw first-hand the personal cost to soldiers of their service in Iraq; through his work in biomechanics, he hopes to make a difference in the quality of peoples’ lives by designing devices that improve mobility, independence and physical freedom.