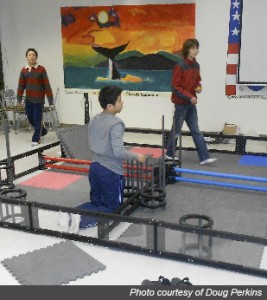 At Mansfield Middle School, local students are given the chance to go above and beyond the daily classroom routine. In mid-February, the school hosted its first ever all-New England Middle School Robotics Tournament, advised by math and science enrichment teacher, Doug Perkins.

The VEX Robotics competition included 11 different teams from Connecticut and Massachusetts and is one of the select few offered solely for middle school students. However, that has not kept Perkins and his students from competing. This was their fourth competition of the year, after competing in (and winning) three previous competitions.

The head-to-head style of competition is based around a four-team structure, with two allied teams on each side cooperating to win. “That’s what’s so great about these competitions,” said Perkins, head of Mansfield’s robotics program, “They foster a degree of companionship and cooperation. It’s never really been about competing for the students. I like that.” 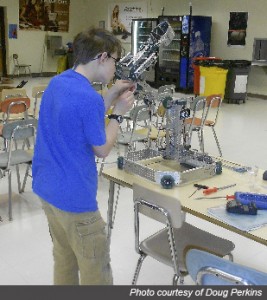 Clearly, the positive environment and creativity has worked for his students. This is the fifth year that Perkins and his robotics teams have been competing against other schools, and the third time a team from Mansfield competed in the VEX Robotics World Championship tournament. Mansfield seventh grader Michael Sotzing, who has had an interest in robots ever since he can remember, travelled with Perkins and his team to last year’s world championships in Orlando, Florida. “Our robot finished 16th in the world last year,” he said. “It was one of the best experiences of my life.”

Perkins’ wife, Annie, who teaches 8th grade science at Ashford School, also attended the middle school robotics competition with her students. This was the first year for the Ashford robotics program, and impressively, the team placed first in the competition.  Flush with success, the students look forward to continuing their interest in the field. “I think it turned out great, because lots of people felt like they were winners that day,” said Doug Perkins. “Some students entered the day intimidated, since this may have been their first competition. By the end of the day, those same students likely got over any question that they belong there.”

Sharing the excitement of engineering and science with their students is a passion for both Doug and Annie, so it’s unsurprising that both Perkins’s were chosen to participate in the School of Engineering’s Joule Fellows program, which immerses middle and high school teachers in faculty labs for six summer weeks. Teachers admitted to the Joule Fellows program work side-by-side with faculty and graduate students and enjoy a unique opportunity to explore and contribute to ongoing research in such areas as biofuels production, fuel cells and fuel cell membranes, flame dynamics in power generation and supercritical fluids. Click here for more details.

“The main thing I got out of the program was an understanding of how a lab works in a university setting,” said Annie. “Learning and observing how engineers solve problems is an incredibly important question to answer as middle school teachers.” Annie said she attributes much of her curriculum to what she learned as a Joule Fellow, including a bridge building unit, an alternative energy unit, and a specialized unit on algae growth. 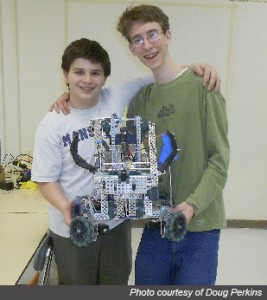 Annie and Doug Perkins believe that hands-on projects such as designing, building and programming robotic units is an especially exciting demonstration of the perseverance of engineers. In mentoring the robotics teams at their respective schools, they stress the importance of working together toward a common goal.  They believe that perseverance, creativity, and cooperation are necessary characteristics of engineering, and they are taught well through the robotics curriculum.