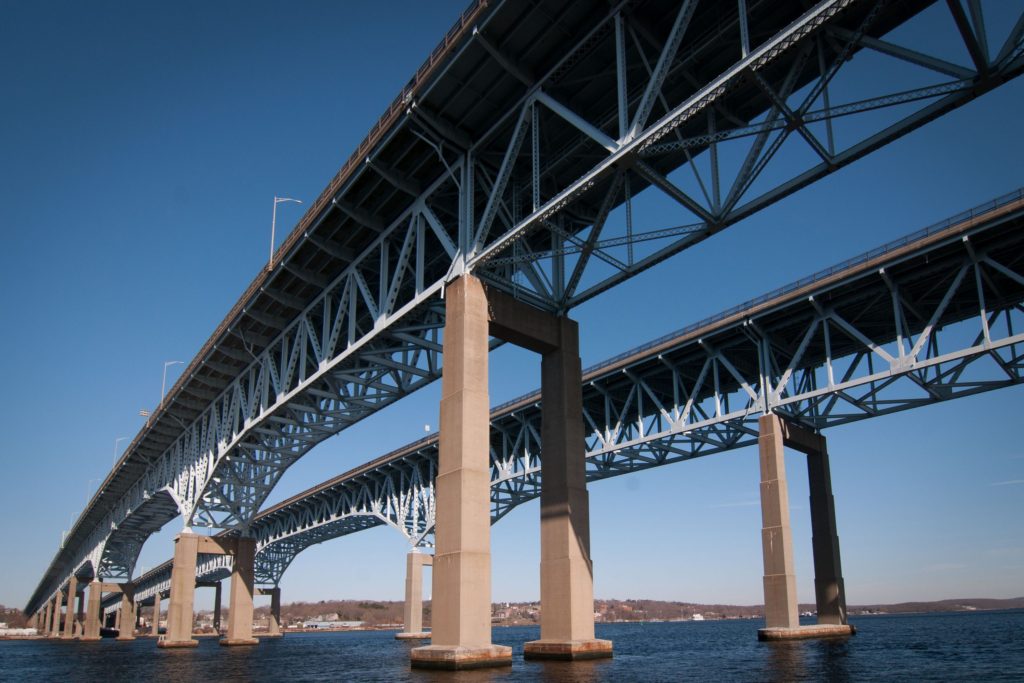 The Connecticut Department of Transportation has received a national award for a new bridge repair method, developed at UConn, that could significantly decrease the time, lane closures, and cost needed to repair a bridge.

The method of repair involves using advanced concrete as a cast over the end of a bridge’s steel girders, where corrosion from the elements and salt often occur.

“When tested in the lab, this repair method actually made the corrosion-damaged girder stronger than an intact girder,” says Arash Zaghi, an assistant professor of civil and environmental engineering, who led the research. Zaghi worked with assistant professor Kay Wille in civil and environmental engineering and a team of graduate students. Both faculty members are also affiliated with UConn’s Institute of Materials Science.

Zaghi says the technique also has the potential to significantly reduce the need for lane closures and cut the cost of repairs dramatically.

Brad Overturf, a transportation supervising planner with the Connecticut Department of Transportation (CTDOT), emphasizes the financial impact of the project.

“We see the potential benefits in terms of speed, cost, and not having to shut down the bridge for the repair,” Overturf says. “There’s enormous potential for cost saving.”

The process is about to be tested under real world conditions.

The award, called a Sweet 16 Transportation Through Excellence Award from the American Association of State Highway and Transportation Officials, recognizes 16 innovative transportation projects throughout the country. These ‘High Value Research Projects’ were selected from more than 120 projects submitted by state-level departments of transportation. 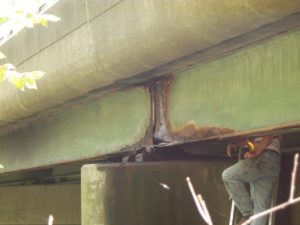 A bridge in Massachusetts, showing corrosion of a steel beam. (Photo courtesy of CME Engineering)

Currently, a bridge has to be jacked up to carry out repairs – the support structure of the bridge can’t hold any weight while it’s worked on. This process can account for up to 70 percent of a repair project’s cost and can close traffic lanes, increasing congestion.

The new technique developed at UConn involves welding shear connectors to the girder, then pouring ultra-high performance concrete directly around the metal, with the studs keeping the concrete in place. Since this can be done without jacking the bridge, this repair method could significantly shorten the time needed to fix support beams.

Many of the bridges throughout the nation were built in the 1950s and 60s, and are reaching the end of their estimated lifespan. The new repair technique could add decades to their useful life. Those aging bridges were often coated in lead paint, and require costly abatement before repair work can begin. The concrete cast simply seals the paint in place and covers it, allowing repairs to proceed with no environmental risk.

Zaghi says the CTDOT has been very supportive of innovative research.

“CTDOT is really one of the most progressive departments of transportation in the nation,” he says. “They’re strongly committed to research and innovation that address the challenges of aging bridge infrastructure.”

Ultra-high performance concrete, which is used in this repair method, is a new type of concrete that is reinforced with steel fibers and made from high-quality components. Zaghi says that, in addition to the impressive strength of the concrete, it hardens in only 12 hours and resists corrosion from bad weather.

“There’s been extensive research into the material – it’s very weather-resistant and water doesn’t get inside of it, as it does with traditional concrete,” he says. “The concrete will help protect the steel.”