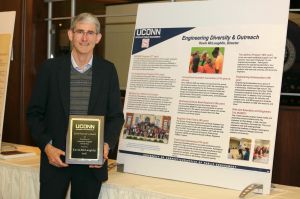 Kevin McLaughlin, director of the Engineering Diversity and Outreach Center

For his work as director of the Engineering Diversity Program at UConn, Kevin McLaughlin received a 2014 Provost Award for Excellence in Community Engaged Scholarship at the University of Connecticut.

A UConn alumnus, McLaughlin graduated from the university in 1983 with a double major in Material Science Engineering and Chemical Engineering. His passion for teaching and mentoring inspired McLaughlin to complete the School of Education’s Secondary Education Teaching Certification Program in 1993. That same year, he began teaching physics and chemistry at E.O. Smith High School. he joined the university in 2002.

Since joining UConn, Kevin has expanded his role to include: directing the Northeast Regional Science Bowl, directing the School of Engineering’s daVinci Project (an annual program which introduces middle and high school teachers to engineering), teaching a leadership class for six different engineering student organization, and serving as faculty advisor to the UConn chapters of the Society of Hispanic Professional Engineers, the Society of Women Engineers, and Engineering Ambassadors. He also serves as an advisor to Engineers Without Borders and the National Society of Black Engineers.

The awards were presented by Mun Choi, Provost and Executive Vice President for Academic Affairs, and E. Carol Polifroni, Director of Engagement. The four other recipients were Aexandra Buda, who graduated this year with a major in Molecular and Cellular Biology; Virginia Ruiz, a grad student who has served two years as co-chair of the Latin American Student Organization; Marie Smith, the Henry Palmer Professor and Assistant Dead of Practice and Policy Partnerships at UConn School of Pharmacy; and Michael Darre, a faculty member in the Department of Animal Science at UConn.