The School of Engineering is very pleased to welcome UConn alumna Kylene A. Perras (’01) as Program Director of Leadership Giving.  In this capacity, she will work closely with Donald Swinton, Assistant Director of Development, to foster closer and more enduring relations with engineering alumni. 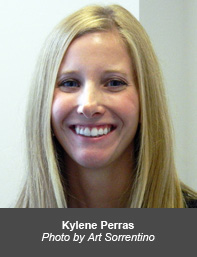 Remarking on her new assignment, Kylene said,“It is an exciting time to be working at the UConn Foundation. With a lofty goal of obtaining $1 billion in new endowment funds in the future, the University’s new President, Susan Herbst, has raised the bar for all of us. I am particularly thrilled to be affiliated with the School of Engineering. With the new R&D tech park and UConn Health Center’s bioscience initiative on the horizon, and under Dean Mun Choi’s direction, the School is well positioned to expand and flourish. It is great to be a part of it all!”

Kylene holds a B.A. degree in political science and psychology from UConn and an MBA from Southern Connecticut State University.  After working for 10 years in government affairs, she recently returned to Storrs, where she is employed by the UConn Foundation to cultivate, manage and steward leadership-level donors and prospective donors for the School of Engineering.

Before coming to UConn, Kylene lobbied the state and federal government on behalf of Murtha Cullina’s Government Affairs Group, specializing in higher education and healthcare advocacy.  She has also retained an association management role as Executive Secretary for the CT State Society of Anesthesiologists.  She previously was employed as a legislative analyst for the Connecticut Conference of Municipalities, where she focused on matters regarding education, transportation and public health.