The Sawyer award is conferred on an individual “who has made important contributions toward the advancement of the gas turbine industry.” Forty-three men from all over the world have received the award, which is a major industry honor. 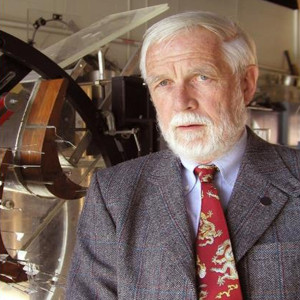 In his 30 year career at Pratt & Whitney and UConn, Langston pioneered the measurement, understanding and prediction of secondary flow in gas turbines, or jet engines. His research in gas turbine flows is known collectively as the Langston cascade. He has also authored more than 75 scholarly journal articles and holds one patent.

“I started working on the problem [of complicated flows in gas turbines] in 1974…All the work is still referred to,” said Langston.

The R. Tom Sawyer award is closely tied to the history of the gas turbine engine. The award was named for Robert Thomas Sawyer, an earlier pioneer in the industry who founded the ASME’s International Gas Turbine Institute, which grants the award.

Langston has been involved with the International Gas Turbine Institute since 1974, serving as a member of the board of directors several times and as vice president between 1997 and 2000.

“I’m honored to be included on the list, especially with those two men,” Langston said.

The award was presented to Langston this summer at the annual International Gas Turbine Institute conference, TURBO EXPO, held this year in Montreal.

Langston earned his bachelor of science in mechanical engineering at UConn in 1959 and his Ph.D. from Stanford in 1964. He returned to Connecticut and worked as a research engineer at Pratt & Whitney from 1964 until 1977 when he joined the UConn engineering faculty as an associate professor. Langston became a full professor in 1983, served as interim dean of the School of Engineering from 1997 to 1998 and was awarded the title of professor emeritus in 2003.

Langston has seen the gas turbine industry transform and grow immensely over the course of his career. The efficiency and reliability of gas turbine engines has allowed both commercial and military aviation to expand to once unimaginable places.

“It’s fantastic; aviation is booming,” said Langston. “For some reason, it doesn’t get the same kind of attention that other technologies get.”

Gas turbine engines cost about 10 to 20 percent of what the original aviation piston engines cost to maintain and average just one in-flight failure about every 30 years. The engines themselves have improved in efficiency over the years, creating major cost savings for airlines and making air travel affordable for the masses. There are currently almost 20,000 planes in the worldwide air transport fleet, with that number projected to grow 75 percent by 2030 . In 2011, the total aviation gas turbine engine market totalled $32 billion.

Gas turbines engines are also used in a growing number of applications on land, particularly in power plants. Langston helped bring some of this technology to UConn in the form of the co-generation power plant opened in 2006.

The plant uses three gas turbine engines to generate power for the campus. They’re more efficient and environmentally-friendly than the original oil-burning engines the plant used because they use cleaner natural gas and harness both electrical energy and steam energy from a single source.

“Gas turbine engines reduce CO2 emissions by almost 75 percent when they replace coal-fired power plants,” said Langston. “I was really proud to be a part of updating UConn’s power plant.”

In addition to his work as a researcher and professor, Langston has also had a distinguished career as a mountain climber. Two of his most notable climbs include summiting Chimborazo Volcano in Ecuador, the farthest point from Earth’s center, and the first ascent of a peak in Pakistan known as T3 led by legendary climber Willi Unsoeld.

When asked what it’s like to stand at the top of a mountain, Langston said “there’s this moment of exhilaration, but then you have to go down…Most accidents happen on the descent.”

Langston said caution has been the key to avoiding disaster during a climb. He spoke about turning around just a few hundred meters from the summit of a volcano in Ecuador which had begun to spew intense sulphuric gases.

Langston and his wife continue to travel frequently. He currently writes a quarterly column and an annual review of the gas turbine industry for Mechanical Engineering magazine and serves on the ASME’s Technical Committee on Publications and Communications and the History and Heritage Committee.

Langston has spent his career contributing to a field that has revolutionized global transportation and energy production, a field which looks to be no less innovative in the coming decades. He looks forward to watching the growth of the industry in the future.