Dr. Leslie Shor of Chemical & Biomolecular Engineering specializes in recreating very small habitats – smaller than the width of a human hair in some cases. Building from scratch a simulated habitat that might sustain up to a thousand different organisms that each need different conditions to survive is no easy trick. 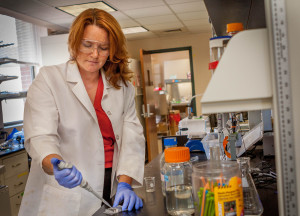 One particular project in her lab prompted DuPont to name her a 2014 Young Professor. The annual program recognizes professors engaged in innovative research that addresses global challenges regarding food, energy and production. Shor, one of 10 professors to receive the appointment, will receive $75,000 over the next three years to support their research.

The project that won DuPont’s attention is the same one that won a Grand Challenges Exploration grant of $100,000 from the Bill and Melinda Gates Foundation in 2012.

Hunger and poverty affect 1 billion people. Population growth, changing consumption habits, and a shifting climate will only magnify the problem. So developing new ways to increase food production is crucial. To that end, Shor and other researchers in her lab hope to find a new way to increase crop yields. For this research, she teamed up with Daniel J. Gage (Molecular & Cell Biology), a microbiologist with expertise in the rhizosphere. That’s the region of soil around a plant’s roots where crucial nutrients are absorbed. Beneficial bacteria in the rhizosphere can help plants by inhibiting pathogens and producing antibiotics. The rhizosphere is also home to protozoa – a kingdom of single-celled animals with the ability to move efficiently in soil. That’s where Shor comes in, with her knowledge of artificial microbial habitats and how protozoa migrate in micro-structured environments.

With her collaborators and students, Shor seeks to increase crop yields by using protozoa to distribute bacteria along growing roots. Currently, applications of biologicals or agrichemicals are not targeted, leading to inefficiency and adverse environmental impacts. Solving one problem might lead to the creation of several more. In Shor’s lab, they’re trying to use the environment as part its own solution.

“The soil system is an incredibly complex habitat, and it’s home to organisms from all five kingdoms – plants, animals protista fungi and archae – are all present in the soil,” she said. They interact with each other, and with the air, water, organic matter and soil grains in complex ways. Typically, microbiologists will take organisms out of their natural habitat and put them into an overly simplified lab habitat.

“There’s no microstructure in those habitats, typically,” she said. “Our microhabitats are not the same thing as real soil, but they do contain some of its features. Our microhabitats offer a window into the microworld.”