Using a special milling process in an enclosed box filled with argon gas, UConn scientists, working in collaboration with researchers from North Carolina State University, were able to synthesize nano-sized crystals of Iron-Chromium and Iron-Chromium-Hafnium with oxygen levels as low as 0.01 percent. These nearly oxygen-free alloy powders appeared to be much more stable than their commercial counterparts with higher oxygen content at elevated temperatures and under high levels of stress.

“In this study, for the first time, optimum oxygen-free nanomaterials were developed,” says Sina Shahbazmohamadi, an assistant professor of biomedical engineering at UConn and a co-author on the paper. “Various characterization techniques, including advanced aberration corrected transmission electron microscopy, revealed a significant improvement in grain size stability at elevated temperatures.” 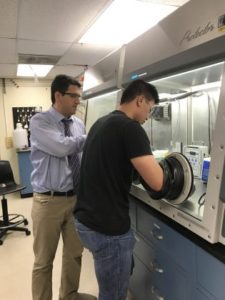 Postdoctoral researcher Peiman Shahbegi-Roodposhti and an undergraduate student in materials science work with a glove box to produce nanomaterials.

Grain size stability is important for scientists seeking to develop the next generation of advanced materials. Like fine links in an intricately woven mesh, grains are the small solids from which metals are made. Studies have shown that smaller grains are better when it comes to making stronger and tougher metals that are less prone to cracking, better conductors of electricity, and more durable at high temperatures and under extreme stress. Recent advances in technology have allowed materials scientists to develop grains at the scale of just 10 nanometers, which is tens of thousands of times smaller than the thickness of a sheet of paper or the width of a human hair. Such nanocrystals can only be viewed under extremely powerful microscopes.

But the process isn’t perfect. When some nanograins are created in bulk for applications such as semiconductors, the stability of their size can fluctuate under higher temperatures and stress. It was during the investigation of this instability that Shahbeigi-Roodposhti and the UConn research team learned the role oxygen played in weakening the nanocrystals’ stability at high temperatures.

“This is only a first step, but this line of investigation could ultimately lead to developing faster jet engines, more capacity in semiconductors, and more sensitivity in biosensors,” Shahbeigi-Roodposhti says.

Moving forward, the UConn researchers intend to test their theory on other alloys to see whether the presence or absence of oxygen impacts their performance at elevated temperatures.

The study, “Effect of oxygen content on thermal stability of grain size for nanocrystalline Fe10Cr and Fe14Cr4Hf alloy powders,” which was supported by funding from the U.S. Department of Energy, currently appears online in the Journal of Alloys and Compounds.

Also serving as co-authors on the paper were Mostafa Saber, an assistant professor at Portland State University; and Professors Ronald Scattergood and Carl Koch from North Carolina State University. DOE funding supporting the research was acquired by Scattergood’s lab.