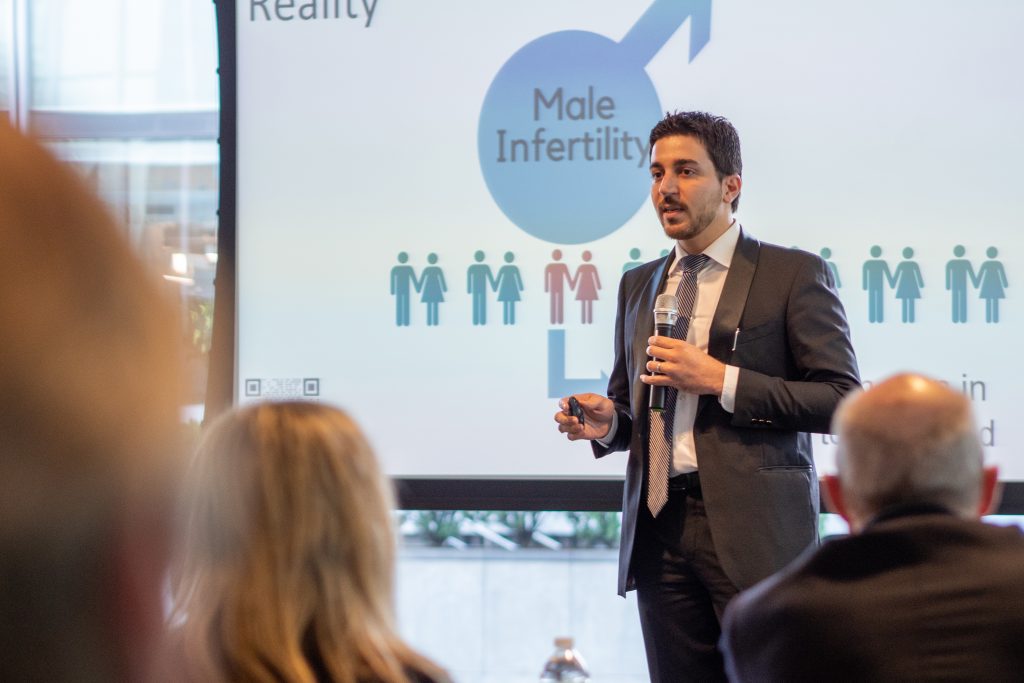 One grew up in the shadow of UConn and the other, on a distant continent. But Stephanie Knowlton and Reza Amin are happy they made their trip to the state’s flagship university – no matter the route.

The pair of biomedical engineering doctoral candidates recently won $20,000 to further their entrepreneurial concept through the Wolff New Venture Competition. They are developing an in-home device to measure male fertility, called QRfertile, under the guidance of Savas Tasoglu, assistant professor of mechanical engineering.

“When we are in the lab every day, it feels like a lab project,” says Knowlton. “But when we get out there and talk to people about the potential to be something that affects real people, that gets us more excited.”

The Wolff Prize is endowed through the Thomas John and Bette Wolff Family Chair in Strategic Entrepreneurship, and the event is sponsored by the Connecticut Center for Entrepreneurship and Innovation in UConn’s School of Business.

Amin came to Connecticut after doing his undergraduate work in electronics in India and his master’s in mechanical engineering in his native country of Iran. He is earning his doctoral degree at UConn in biomedical engineering. Knowlton, of Tolland, grew up with some members of the Wolff family as neighbors – something she didn’t even realize until the day of the competition.

Amin and Knowlton began working on this project in 2015, when it was just a research idea. One in six couples of reproductive age worldwide are affected at least once by some form of infertility, and male infertility contributes to about half of those cases, according to Tasoglu.

The pair developed the technology needed for the home testing before they had the idea of what the exact product would be. They then started to explore how consumers use microfluidics – the science of manipulating and controlling fluids on a small sub-millimeter scale.