Meet John and Sue, The Pioneers of the Internet at UConn 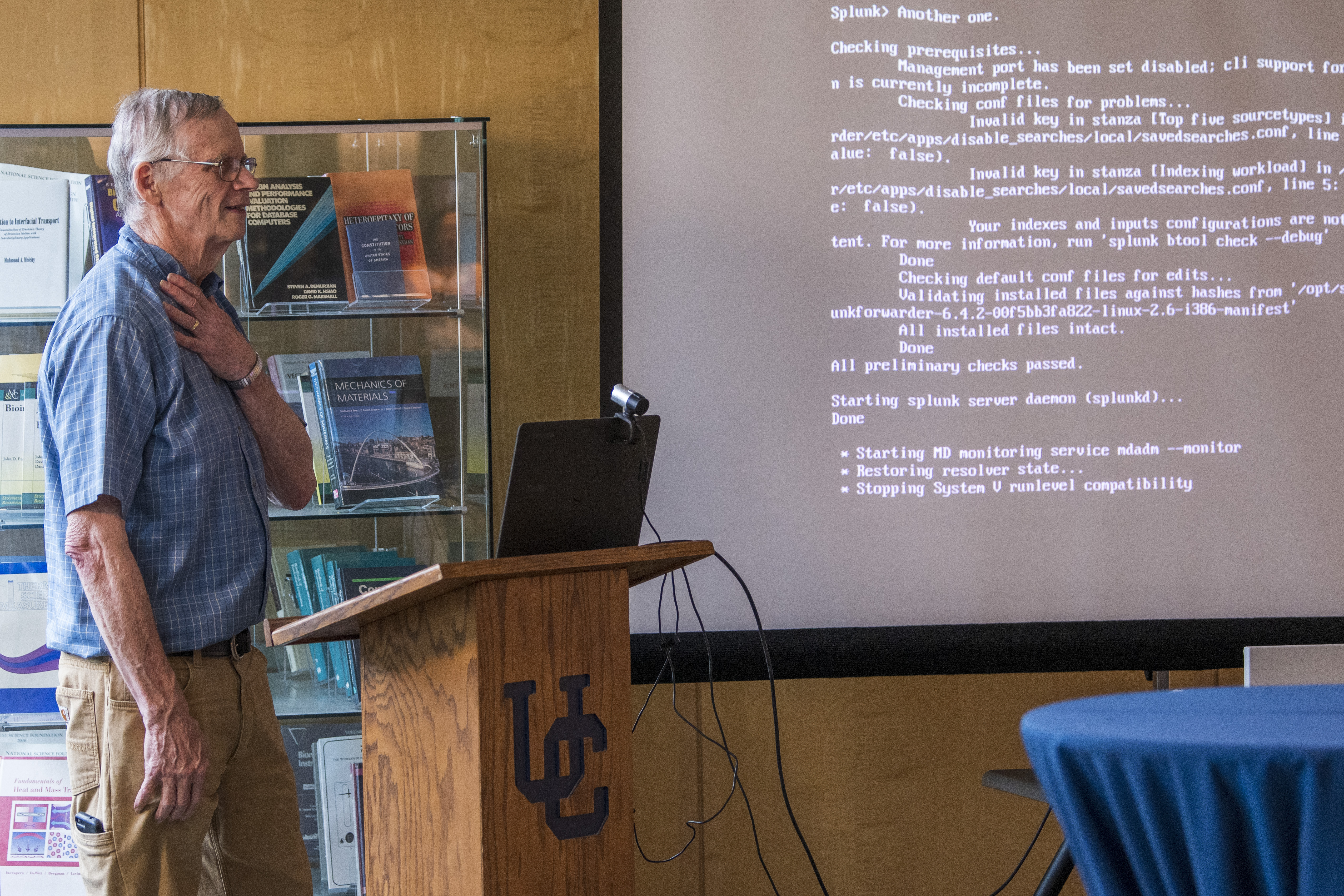 John Marshall, one of the pioneers at UConn who established the internet on campus, shutting down the old server for good at the Information Technologies Engineering Building (ITE) on June 25, 2019. (Sean Flynn/UConn Photo)

In a ceremony held at the end of June, in the Information Technologies Engineering Building, John Marshall stepped up to a computer, entered a short line of code, and shut down a server that served as the last known artifact linking the University of Connecticut to its earliest connections to the internet.

Marshall, who worked for the UConn School of Engineering from 1976-2009, served as the ceremonial shutdown appointee because of his role in originally setting up that server, and connecting UConn’s first users to the internet.

The story goes that when faculty members from the University of Connecticut Computer Science Department were clamoring for a connection to internet in the late 1980s, Marshall decided he had to take action.

With the internet in its infancy, and primarily used as a way to transmit emails and files between different users, only higher education institutions and government entities had allocated resources towards building the infrastructure needed to connect to this burgeoning technology, but UConn still hadn’t committed to the technology yet in the late 1980s.

Even so, Marshall made it his mission to serve the faculty within the School who were asking for access to it. So, on August 18, 1987, he went ahead and purchased the domain name that every faculty, staff, and student has encountered over the last 25 years—Uconn.edu.

Now, every email ends with the domain name “uconn.edu,” but back in 1987, when Marshall approached the “Computer Center,” the pre-cursor to today’s Information Technology Services department, about adopting the domain name campus-wide, he was met with reluctance:

“I remember first reaching out to the folks at the Computer Center to gauge their interest in using the domain and creating a larger network, but they responded by telling me that they couldn’t see a need for it at the time.”

Marshall said that the reluctance didn’t come from malice, but was based in an overall skepticism across the country about the internet as a viable and useful technology.

But, Marshall carried on and eventually connected the School to the internet through connections configured by the phone company, purchased several 19 kilobyte routers, set up an early email software called Sendmail, and created UConn’s first internet gateway and domain name server (DNS) which they called “brcgate.” This DNS was crucial, as it translated a computer’s  internet address, like mycomputer.mydepartment.edu to its numeric equivalent.  Sendmail then translated both incoming and outgoing messages so they could be sent into a specific mailbox.  In doing so, it contacts the name server to (for outgoing messages) to get the internet number of the computer it is to be sent to.

After that initial set-up, Marshall, as well as the School’s other network administrator Sue Lipsky, served as the support for Sendmail and the network configuration, and provided domain name services for the larger University when the Computer Center got requests to connect other users to the internet.

Lipsky said that in those first few months, when she went around training different departments on email, she got some initial disinterest and pushback:

“While John was setting up the infrastructure, I was spending a whole lot of time training faculty, but there was a lot of initial resistance,” Lipsky said. “A lot of people would come up to me and say things like ‘why can’t we just walk down the hall, why do we have to send an email?’” Ironically, those same people, within a year, were the biggest screamers when the system would go down.”

Lipsky said that, for several years, none of the other computers outside of the school used the network or UConn.edu domain, but used a separate system to connect called BITNET from IBM, and users of that service would have email addresses that ended in “UConn.Bitnet.Net.”

It wasn’t until a few years later, in the early 1990s that the University started to accelerate their commitment to the internet, by installing fiber optic lines underground and building its server infrastructure, in order to handle the new traffic brought on by the growing internet. Once those crucial steps were made, internet services were provided to the rest of the School of Engineering, as well as the entire campus. Later, in December 1996, UConn’s website, www.UConn.edu was launched, and over the past 20 years, UConn’s technology and infrastructure has become more and more complex.

But, in those early days, when they were building the initial infrastructure, Lipsky said that the process wasn’t easy or smooth:

“Needless to say, there were ups and downs throughout this process,” Lipsky said. “Fiber was accidently dug up at times and systems crashed, including the network devices and name servers.”

More than 32 years later though, Lipsky sees the internet at UConn, and in general, as a much more powerful tool than they could have ever envisioned in the early days:

“I absolutely hate shopping, and back 30 years ago I had to suck it up and drive to the store,” Lipsky said. “These days, I order a lot of stuff over the internet, and I think that capability, and all of the social media that I use, would be very hard to give up now.”