A team of researchers from the School of Engineering and the UConn Health Center has received $1.09 million in National Science Foundation funding in support of their research aimed at developing a scalable and universal model for fault detection, diagnosis and prognosis of heating, ventilation and air conditioning, or HVAC, systems in buildings of differing sizes and functionalities.

The team includes Drs. Krishna R. Pattipati and Peter B. Luh of Electrical & Computer Engineering, Bing Wang of Computer Science & Engineering, Robert Gao of Mechanical Engineering and George Kuchel, MD, professor of Medicine and Director of the Center on Aging at the UConn Health Center.

Dr. Pattipati explains that the goal of the project is to develop a simple, robust, generalized, and scalable model-based and data-driven process – along with the associated detection, inference and predictive analytics – that is equally accurate for a variety of building designs, sizes and uses.

The team’s focus on HVAC is motivated by their observation that buildings account for more than 40% of U.S. energy consumption.  Furthermore, HVAC constitutes a whopping 57% of the $223 billion in (2009) energy used in commercial and residential buildings.  According to Drs. Pattipati and Luh, a remarkably high proportion, approximately 20%, of the energy consumed by HVAC is wasted due to performance-hampering conditions such as faults, clogged air filters, poor controls and errors in installation or commissioning.

If the team can develop an accurate and reliable universal model, it will be used to identify patterns that are indicative of healthy, as well as under-performing HVAC systems.  The team asserts that their development of fault detection, diagnosis and prognosis (FDDP) methodologies for HVACs will improve equipment availability, lower energy and operating costs, extend equipment life, and enhance the comfort of building occupants.

Dr. Pattipati notes, “Current sensing technology for HVAC systems tends to detect only significant performance variations commonly associated with system failure. Such systems are unable to detect a subtle degradation caused by, say, the accumulation of dust on filters. Further, they are imprecise in identifying the source of the problem; as a result, the system must be brought offline and diagnostics must be run throughout the system to identify the source of the p 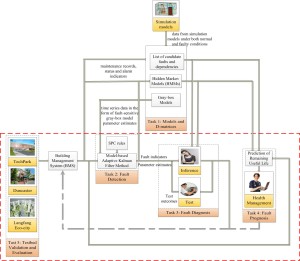 The team aims to develop a model and metrics that will allow building personnel to identify even subtle performance changes in HVAC and the chiller system, and to pinpoint the exact location where the anomaly exists so it can be quickly corrected.

Dr. Luh explains that one challenge in developing a generalized model is the varying HVAC needs and integration within different buildings.  The team chose three distinct sites with the objective of testing their model in radically different environments to determine whether it can accurately mirror and predict HVAC conditions irrespective of the varying demands. The team will capture and analyze data – such as air temperature, humidity, water flow, air flow, electricity consumption, and the like – for portions of each of the buildings and develop models that accurately reflect and predict the HVAC processes.

The project began over the summer, with data collection by two graduate students at a building in the ENN Group’s EcoCity in Langfang, China. ENN is China’s leading clean energy company.  The EcoCity represents a collaboration between ENN and Duke Energy aimed at advancing solar power generation, community battery storage, grid and residential management optimization, and biofuels. With its focus on highly integrated, energy efficient systems, the EcoCity facility offers a distinct contrast versus the needs of the other two test sites.

The second building targeted by the team is the Information Technologies Engineering (ITE) building at the UConn campus, which houses the Electrical & Computer Engineering and Computer Science & Engineering academic departments, laboratories and classrooms, offices and auditoriums.  According to Dr. Pattipati, the researchers negotiated with UConn’s management contractor, Schneider, to obtain data that will form the major input to the 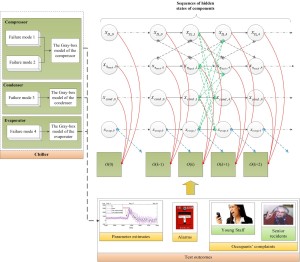 Rounding out the three sites is a life-care retirement community in Bloomfield, CT, Duncaster. There, the equation shifts because their focus will be on the shared or communal spaces where senior residents gather.  Life-care communities such as Duncaster offer their own challenges, with generally elderly, more sedentary residents and younger staff members convened in the same facility, often with differing environmental needs such as temperature and humidity. For this portion of the project, Dr. Kuchel and his team of health care researchers will conduct resident interviews to ascertain their environmental preferences. Others on-site at the facility will be able to register their real-time comfort using a smart phone link or similar device.

The environmental and “residential” needs of each of the building locations will provide the team sufficient variability that, if their model and metrics can effectively emulate efficiently-performing HVAC and chiller systems in each of the three sites, the researchers will have achieved significant progress toward building a generalized model.