My Husky Valentine: Met at UConn 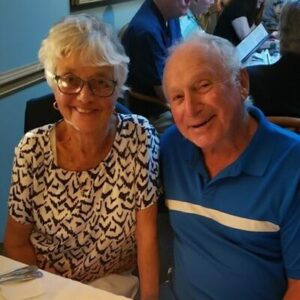 “I started to date Claudia in the summer of 1956. I met her when she was a waitress at an ice cream shop where all my guy friends would stop for large scoops of ice cream before heading out for the beach area.

She entered UConn that Fall looking to obtain an education as a teacher. At that time, UConn did not have a formal teacher education program, so she matriculated into the Child Development Program.

With her living in South Campus, first as an independent and then in a sorority ADPi, and myself (4) years in the North Campus “Jungle” provided a challenge to getting together socially.

Both of us having limited resources (i.e. no car & no money and limited time because mostly because of Gerry trying to keep up with his Enginneering courses), our time together consisted mainly walking to Hawley Armory which we considered a halfway point and then going to the Student Union. It was always interesting walking in the winter cold and the UConn wind always in our face or at our back. The other aspect of a social life at UConn at that time was the restricted rules of dormitory living with no mixing of sexes in the dormitory and having to have Claudia back to her dorm by a certain time or she would be locked out and would have to get special permission to get back in or secretly have a friend let her in. After I graduated in 1959, we carried on a long distance relationship while Claudia was still at UConn. We decided to get married after her graduation. Anyway we both survived the circumstances and used our education to enter the working world  and use our individual educational backgrounds. With both of us being the first of our families to attend college, and our lives connected because we were both at UConn at the same time, we have a very special feeling towards UConn and the Schools of Engineering and  Education that would eventually provide the  wherewithal for our children and grandchildren to also attend college and have successful educational and career endeavors.” 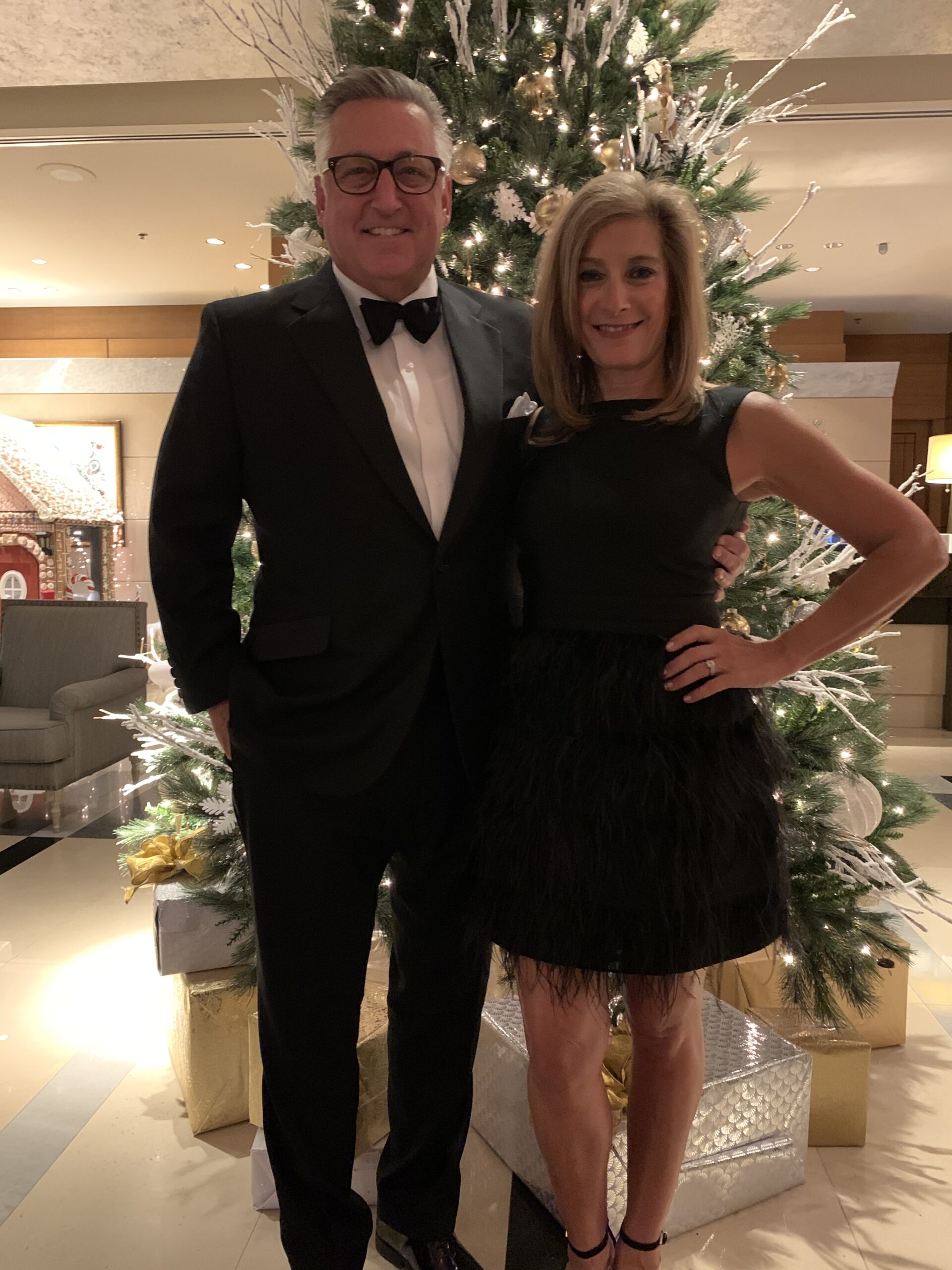 “I met my future wife in the dorms of West campus, in the summer of 1982. I was taking the six credit ChemE lab and Mary-Lisa was taking a FORTRAN computer science course.  I saw her during check-in in the dorm, as I was sitting with my father watching a Celtics playoff game.  I saw her and immediately turned to my father and said “I am going to marry her, Pops”.

I don’t know what it was, but it was love at first sight for me. (I don’t think it was for Mary-Lisa).

I helped her with her stereo up to her dorm room and made small talk as nervous as can be.  I then got the nerve to ask her for some engineering paper the following day as she was sunbathing in the quad.  I recall this as if it was yesterday.

I then didn’t see her again for a few days/week as the chemE lab was really demanding. I saw her at the dorm dance, asked her to dance and I have been with her literally ever since.   We have been married for 31 years and have three beautiful adult children.

If it wasn’t for the UConn School of Engineering, I literally would not have met the love of my life.” 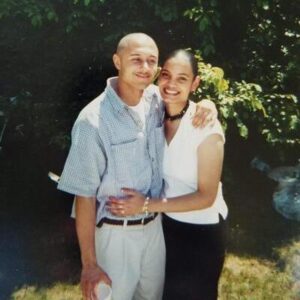 Rob and Luz then. 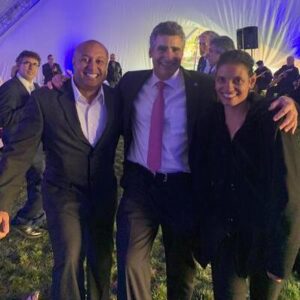 “We first met at UConn in 1997 when Rob was a sophomore and I was a freshman. Rob was very social and would spend a lot of his time in Northwest which is just a dormitory now, but at the time was considered the “engineering” dorm.  My sister lived in Northwest as well and knew Rob before I did.  She was a year ahead of me and had a class with him their freshman year, so she was aware of who he was, along with a few other friends he would interact with.  I was roommates with my sister and was eventually introduced to Rob by a mutual friend who lived on my floor.

Ironically, Rob and I started UConn as non-engineering students but were still drawn to each other by the laws of the universe.  Rob was automatically enrolled into the school of liberal arts when he applied without applying to a specific school, and had to work hard to maintain a high GPA and eventually get approved into the School of Engineering.  My experience was slightly different. I applied to UConn as an undecided major and although I completed an Engineering Diversity Program the summer of my freshman year, I wasn’t automatically enrolled into the School of Engineering. Like Rob, I had to work hard to obtain a high enough GPA to get admitted into the school.  It was one of the things we had in common when we first met that eventually turned our friendship into something more.

Over the course of our UConn careers, Rob and I both switched majors within engineering.  Rob began his engineering studies in computer science, which he excelled at, it always came easy to him.  He helped me through many CSE projects and all-nighters because it doesn’t come that easy to all of us!  He eventually switched and obtained a BS in electrical engineering. I began my studies in electrical engineering and made the switch to biomedical engineering after finding the course work more aligned with my interests. Rob and I were able to take courses together and push each other along the way which looking back, made our years together at UConn that more special.

We got engaged in the spring of 2001 after four years of dating. Rob was wrapping up his last semester and I had another year to go.  We knew we didn’t want to wait long after my graduation since we lived in different states.  Rob was living in RI at the time, but found employment in CT after graduating.  We got married in June of 2002, almost exactly a month after my graduation.  Seven years later we had our first child and are now blessed with a beautiful family of four children.  Rob always found himself back in the software world and is currently a vice president at his company.  He has stayed very connected with the UConn community and was the driving force behind the installation of Verbi’s gunshot detection system in the university.  After graduation I worked in the biomedical field short term and then made a switch to healthcare and obtained a medical assisting degree.  I worked at a hospital for several years and have been home full-time with my children since the birth of our first child.  Being out of the work force has had its challenges but it has been a blessing being able to spend this time with them.  People get different experiences and memories from their college years and for us those UConn years will be extra special because we were blessed to meet each other.” 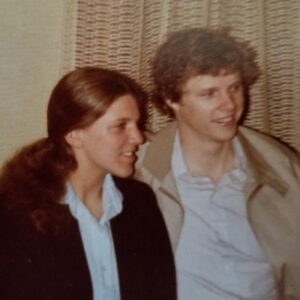 Tom and Patty then. 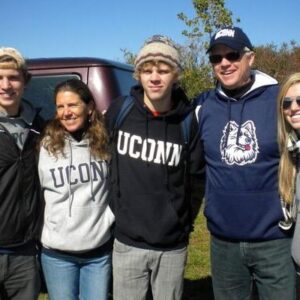 Tom and Patty with their family at the UConn homecoming game.

“You want a sip of my Coke?” That’s how it all started, over 40 years ago during the Fall semester of 1977 at UConn, in room 204 of Crandall D in South Campus (the OLD South Campus!). That’s when they first met each other. Patty Turner and her roommate came over from Crawford D to meet some of the guys in Crandall. She strolled into room 204 and introduced herself to the geeky engineering guy studying at his desk. It was love at first sight! Eventually she asked him out to the South Campus semi-formal—their first official date! Patty (1981 BS CLAS) and Tom (1979 BS Civil Engineering) got married in 1985, bought their first house in Guilford CT, had their first child Annie in 1991 (2013 BS in Accounting with honors), followed in 1994 by twin boys Sam and Ted (2016 BS Computer Science and Engineering with honors) and have lived in Guilford, CT ever since. The Turner/Jensen family bleeds blue and are huge fans and supporters of UConn athletics (especially the basketball, soccer and field hockey teams) and the School of Engineering. Go Huskies!” 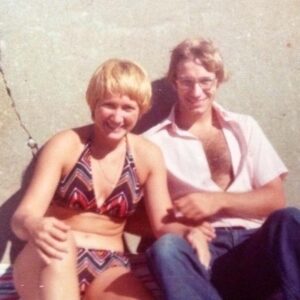 Joel and Heidi then. 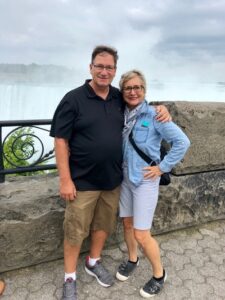 “It was the fall of ’74 when Joel Douglas first noticed Heidi Seifert in Putnam Refectory. She wasn’t hard to miss carrying a seven-foot javelin to dinner after track and field practice. It took a bit of encouragement from his Ellsworth floor mates – and some grain alcohol punch at the welcome back from winter break party – for Joel to work up the courage to invite Heidi on their first date. They quickly learned that they had a lot in common. Both were serious students with strong family ties, work ethic, and shared interests. At spring break, he brought Heidi to Woodstock to meet his Italian nonna, the family matriarch and arbiter. In August, Joel, or Heidi (there’s a debate), popped the question.

Forty-three years, 45 from when they met, they’re living the proverbial dream. Southwest Florida residents who summer in Vermont, Heidi is retired. Joel is happily ensconced in his carefully planned encore career as a successful patent agent and forensics engineer. They travel a lot, play golf, and cruise the back bays on their appropriately named tritoon Last Call. A lifetime of friendship and love that started in a little place named Storrs.”

Have a UConn love story? Click here to submit it!