Two of New England’s flagship universities and the United States Navy’s primary builder of submarines are at the helm of the new National Institute for Undersea Vehicle Technology.

Located on the Connecticut coast, the new national institute was established to develop the personnel and knowledge to accelerate critical research and enhance U.S. dominance in submarine and other undersea technologies. 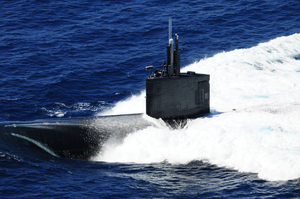 It is a joint effort between the engineering schools at the University of Connecticut, University of Rhode Island, and General Dynamics Electric Boat, recognizing the rich history of the region, which has been a hub for development of the technologies and the workforce that advances the national undersea arsenal.

“This initiative demonstrates the tremendous potential for innovative collaboration not only between universities, but in partnership with industry leaders and government,” says UConn President Susan Herbst. “On behalf of UConn, I am very excited that our institution is a key player in this important work.”

Headquartered at the UConn Avery Point campus, the National Institute for Undersea Vehicle Technology capitalizes on a close proximity to the naval submarine base in Groton, Connecticut, as well as to Electric Boat’s facilities in Connecticut and Rhode Island, the main campuses of both UConn and URI, the Naval Undersea Warfare Center, and the Naval War College. A cooperative research and development agreement with the Naval Undersea Warfare Center in Middletown, Rhode Island, furthers the regional significance of the institute.