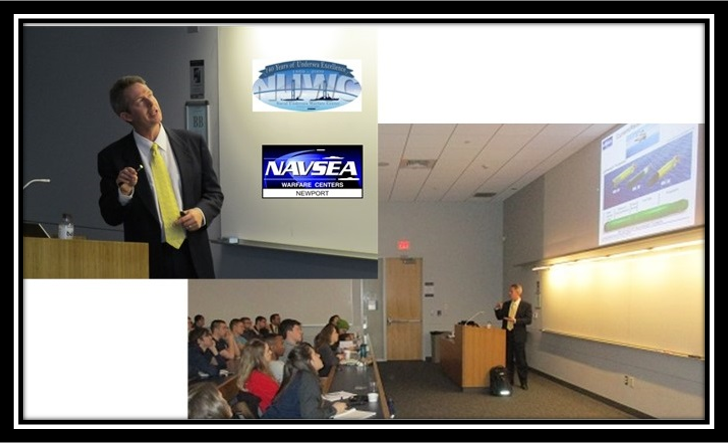 Students enrolled in Spring Semester 2018 ENGR 3109, Navy STEM Professional Development Seminar course, were fortunate to hear Dr. Koch’s presentation, “Navy Undersea Vehicle Structural Acoustics and Stealth.” He discussed a broad array of technologies involved in allowing the U.S. Navy’s undersea vehicles to operate in a covert and stealthy manner and live up to their apt name as the ‘Silent Service.’

He emphasized that this technological edge in a chaotic and ever-changing world involves both the fundamental understanding of the physics of structural acoustics and structural vibrations as well as the application of these and other engineering technologies to the acoustic and non-acoustic silencing of advanced undersea vehicles. His seminar included both an examination of the definition and importance of vibro-acoustics physics and how it is applied by scientists and engineers to both manned and unmanned Navy undersea vehicles and associated systems.

“We also learned about NUWC Newport. It is a nonprofit company with both military and civilian leadership. They include an enormous amount of different STEM fields and the day-to- day environment includes such tasks as desk/office, computer laboratories, testing laboratories, navy bases/defense contractors for fleet support, and other national/international travel.”

If you would like more information regarding the new Navy STEM program, contact the program administrator, Stephanie Wanne at stephanie.wanne@uconn.edu.