Major research discoveries generate news headlines. But a research undertaking by one University of Connecticut engineering lab seeks to forestall some headlines of a diff 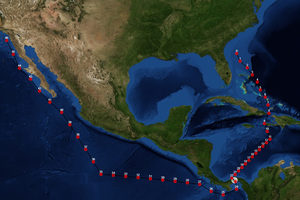 The loss of life because of weather events, as happened on Oct. 1, 2015 when cargo ship El Faro sank with its 33-member crew in Hurricane Joaquin, is one example. Transcripts released by the National Transportation Safety Board showed an increasingly anxious and panicked crew as the 790-foot vessel sailed into the raging storm two years ago.

Software developed by Krishna Pattipati, UTC Professor in Systems Engineering at UConn and his research team, in collaboration with the U.S. Naval Research Laboratory-Monterey, may go a long way toward avoiding such tragedies.

The prototype, named TMPLAR (Tool for Multi-objective Planning and Asset Routing), is now being used by the Navy to vastly improve the ability of ships to reroute through unpredictable weather. It is the type of technology transition that the new National Institute for Undersea Vehicle Technology based at UConn Avery Point, is now able to foster.

Created by Pattipati and electrical and computer engineering graduate students David Sidoti, Vinod Avvari, Adam Bienkowski, and Lingyi Zhang, and undergraduate students Matthew Macesker and Michelle Voong, TMPLAR is still in development, but it has already been fully integrated with the Navy’s meteorology and oceanographic weather forecasts.