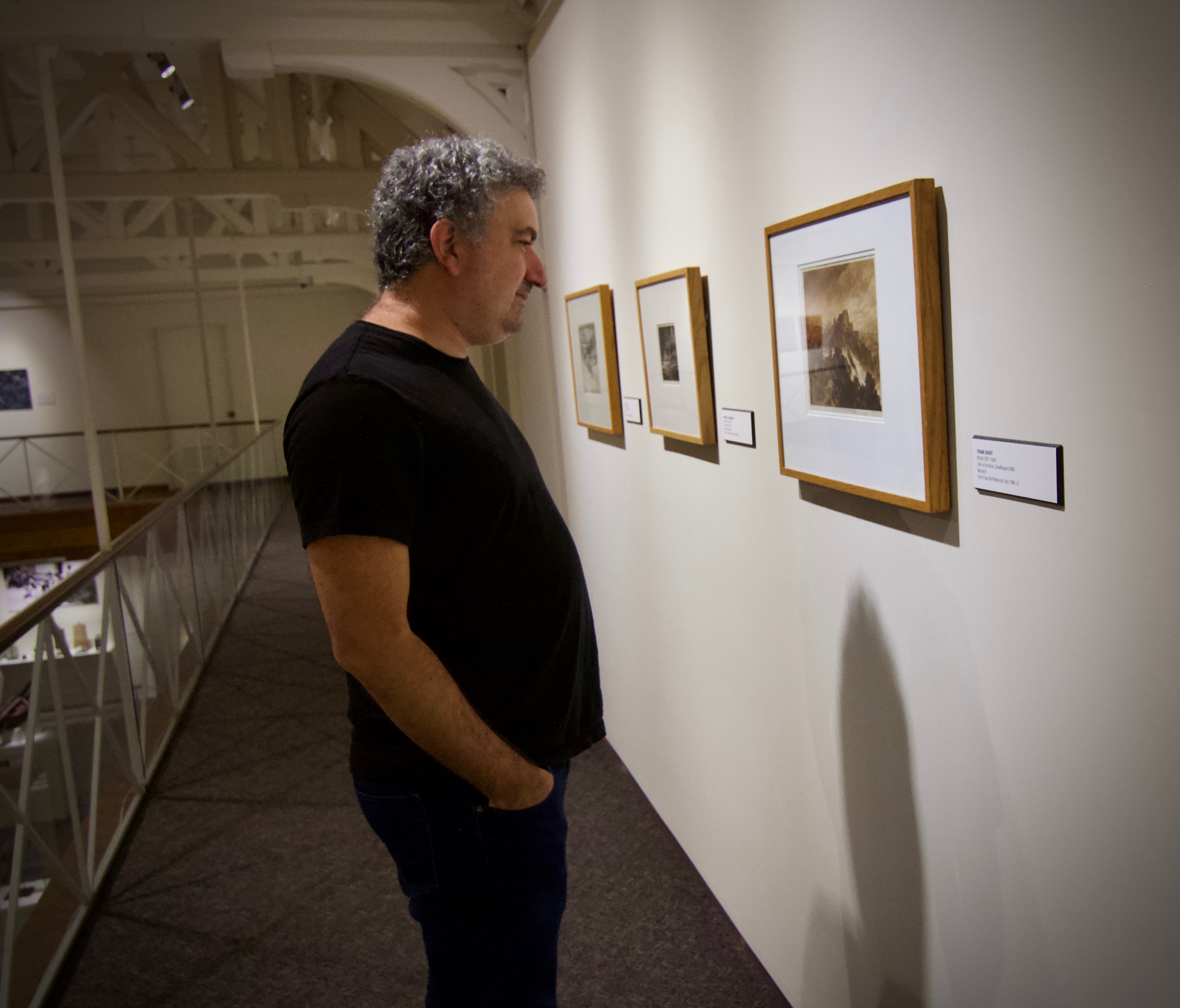 Matheou observes his exhibit at the William Benton Museum of Art on September 24, 2019. (UConn Photo/Eli Freund)

Art and science are two fields that appear to be worlds apart at first glance, but according to George Matheou, assistant professor of mechanical engineering, the intersection between the two are actually extremely important. This notion became the inspiration behind his art exhibit called Fluid Dynamics in Art and Nature at the William Benton Museum of Art.

The exhibit, which began on August 23, 2019, explores the similarities between art and science through artists’ works and computer simulations of natural phenomena that depict fluid flow. The exhibit aims to “promote creativity, critical thinking, and self-learning”.

Matheou, who joined the University of Connecticut in 2017, said that the inspiration for working on the exhibit stemmed from his lifelong passion for art and illustration, and “art of science” exhibits of fluid flows he’d come across at conferences.

“I think they are very similar and very alike. It is frustrating when people put labels such as ‘this is engineering, and this is art,’ Matheou said. “In both you have to solve problems, communicate, and create, and this is what matters to me.”, Matheou said.

Due to that passion for art and teaching, he decided to try something new, and bring the concepts in his Fluid Dynamics class alive through whiteboard art:

“I used to draw concepts on the whiteboard for the students, and I found out that they liked it, they were very enthusiastic about it and they gave very positive feedback,” Matheou said.

Once he noticed students’ positive reactions to his small drawings on the board, he realized he wanted to take things a step further in Spring of 2019 by reaching out to Amanda Douberly, assistant curator at The Benton, about the possibility of an art exhibit that would be tied into his class. Douberly expressed interest, and just a few months later, the two had selected art together that was in the museum’s archives. As you walk through the exhibit, you will see paintings that depict clouds, the flow of humidity, water, or marine life. 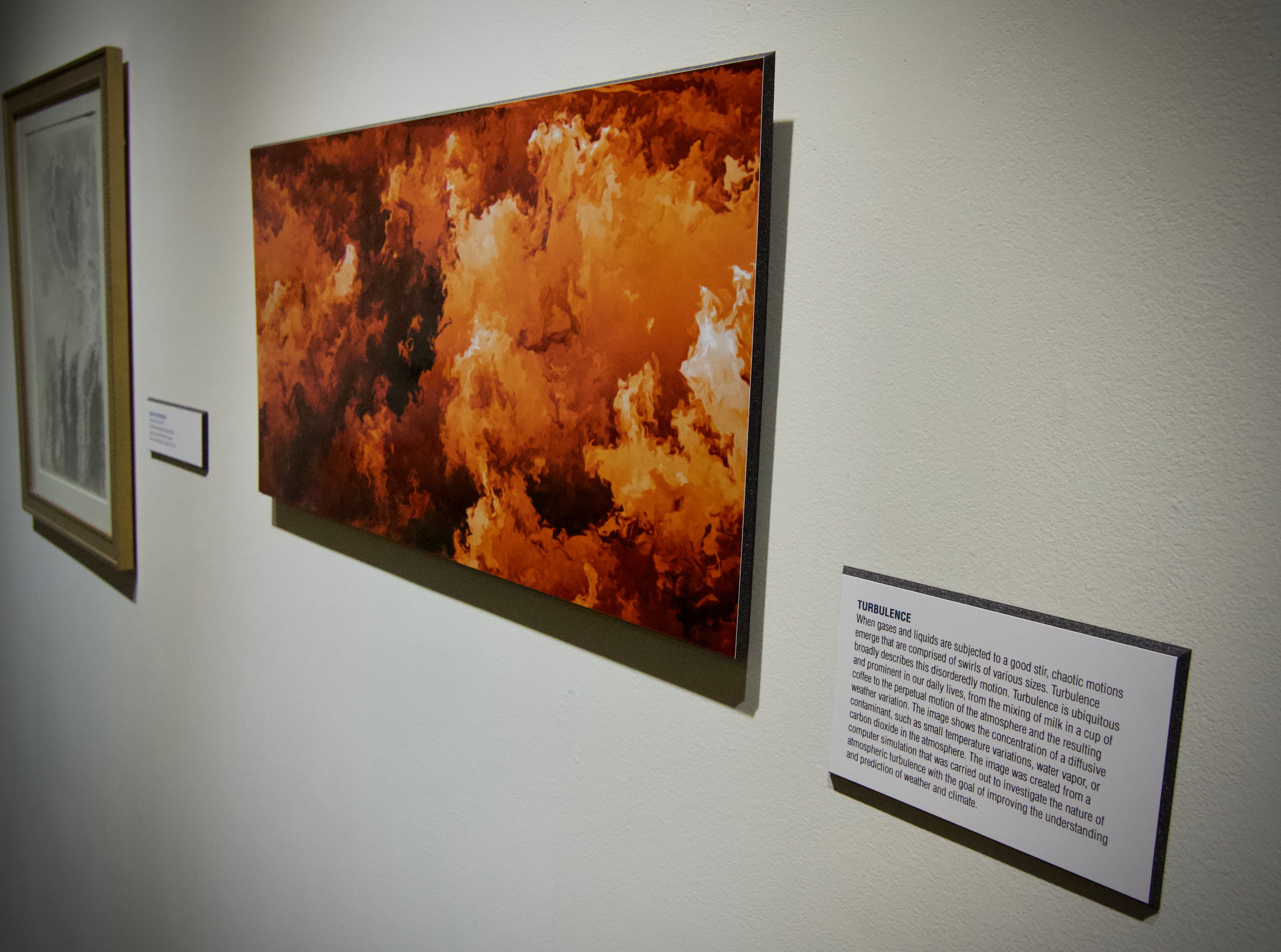 Turbulence, one of the pieces in the exhibit, visualizes the chaos of liquid when mixed, like in an engine. (UConn Photo/Eli Freund)

Matheou said that he chose the artwork titled “Aqua” by Consuelo Gotay to discuss the topics of buoyancy and pressure in relation to different fish in the piece. All of the paintings depict fluid flows in the form of nature, as he wants his students to be able to relate to “real-world problems that engineers are solving.”

In addition to his personal passion for art, Matheou also stated that the exhibit has helped him achieve his goal of creating a more progressive educational environment that prioritizes creativity and thoughtfulness in our changing world.

Nowadays, he said, you must be able to apply creativity to solve complex problems, especially in an age where automation is becoming more commonplace:

“You have to find ways of exploiting your creativity, this is a key quality for engineers and scientists. If you are only able to do calculations, the computer will end up doing that for you,” Matheou said.

Additionally, he commented that education is changing drastically, and professors must update their teaching styles to match a whole new generation of students with declining attention spans:

“Students are absorbing a lot of hyper-stimulating online content, and it is difficult for them to switch to a boring lecture–our lectures must compete with this by incorporating exciting and engaging content as well.” Matheou said.

Fluid Dynamics in Art and Nature will be open at the William Benton Museum of Art until October 13, 2019. For more information on the exhibit, please visit: https://benton.uconn.edu/fluid-dynamics-in-art-and-nature/.