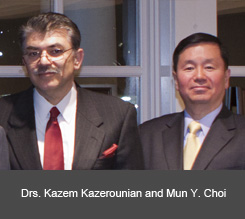 There are new developments at the University of Connecticut and the School of Engineering.  Dr. Peter J. Nicholls, who has served as Provost and Executive Vice President at UConn with great distinction for the last six years, will be stepping down from that position on May 31, 2012.  Provost Nicholls has played a significant and central role in UConn’s growth in academics, research and reputation.  He will remain at UConn as a key member of the faculty, returning to his research and teaching in the fall.

The news was shared by University of Connecticut President Susan Herbst in a January 9 e-mail to the UConn community.  The university will launch a national search for his replacement in the fall of 2012.

Dr. Herbst has appointed the School of Engineering’s Dean, Mun Y. Choi, to serve as interim Provost.  In announcing the news, Dr. Herbst remarked, “Mun has excelled as our engineering dean and I know that he will help ensure a smooth transition.” Dean Choi will assume the interim Provost position officially on June 1.

In preparation for his upcoming role as interim Provost, Dean Choi has appointed Associate Dean for Research & Strategic Initiatives, Kazem Kazerounian, to serve as interim Dean of the School of Engineering effective June 1 as well.

“I look forward to working closely with President Herbst and the entire UConn community during the transition period.  This is an exciting time at UConn as we look ahead to the emerging Bioscience Connecticut initiative with Jackson Laboratories, the unfolding plans for the Tech Park, the Storrs Center mixed-use village and the new faculty hiring program.  We will continue to emphasize interdisciplinary collaboration and partnerships to achieve the important mission of our institution,” noted Dean Choi.