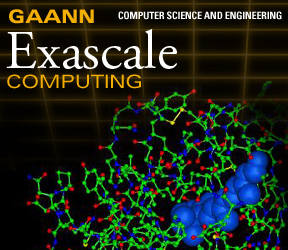 The GAANN grant, paired with additional funds provided by the School of Engineering, will support 10 doctoral students per year as they pursue research with some of the nation’s leading experts in the field of exascale computing.

Exascale computing is sort of a Holy Grail of the supercomputing world that researchers around the world have set as a long-term goal.  It refers to computing systems that are capable of executing 1,000,000,000,000,000,000 (1018th  power) calculations per second. Today’s fastest computers are capable of a fraction of exascale performance, at petaFLOPS (1015th power) processing power.  China’s Tianhe-2 supercomputer is the current leader at over 33 petaFLOPS capability.

Dr. Huang remarks, “The research community has observed that exascale computing capabilities will for the first time enable a truly multi-scale attack on research problems emerging from various science and engineering disciplines. The U.S., Russia, the European Union and technology leaders in Asia are all investing significantly in exascale supercomputer research.”

Exascale capability will enable the U.S. to maintain its leadership role during the petascale era and to continue to innovate in multiple industries, including aerospace, energy, healthcare, information technology and manufacturing, and the like. According to Dr. Huang, “The challenge to attain exascale capability is complex and involves technical hurdles such as exploiting massive parallelism at the algorithm level, coping with software run-time errors from a billion processing elements, efficient large-scale inter-processor and processor- memory communications, as well as reducing the power requirements for future hardware.”

The GAANN Fellows will be immersed in ongoing work at UConn that focuses not on building an exascale supercomputer but rather addressing technical challenges whose solution will enable exascale computing to arise. Dr. Huang notes that current work at UConn focuses on aspects such as algorithms to support massive parallelism, software to cope with run-time errors, and hardware to reduce power consumption. The team is also interested in pursuing sustained exascale-level throughout by coordinating large-scale distributed systems, which face technical hurdles such as efficient inter-processor and processor-memory communications.

The research team is committed to ensuring a diverse pool of GAANN recipients, and they intend to recruit candidates from women’s colleges, HBCUs and minority-serving institutions in addition to students with disabilities and veterans.