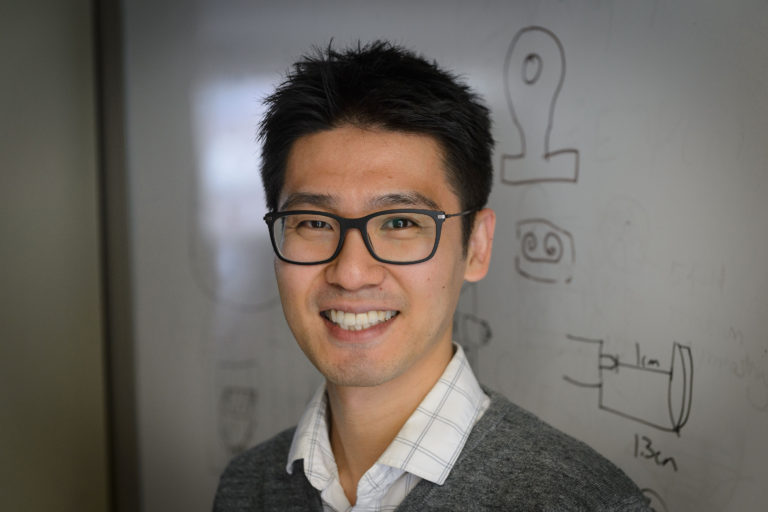 UConn researcher Seok-Woo Lee has developed a new material designed to address some of the challenges to deep space travel by changing shape at very low temperatures.

Exploring beyond our solar system requires traveling enormous distances. The nearest star system to ours – Alpha Centauri – is 4.37 light years away, or 25 trillion miles; and distant star systems will take hundreds or thousands of years to reach, even in the best of circumstances. So scientists who want to send unmanned probes to another star system must create some innovative technologies that can outlive them. 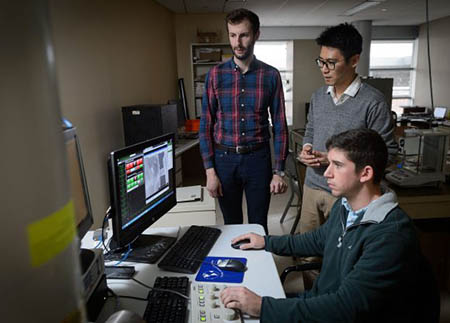 Seok-Woo Lee, assistant professor of materials science and engineering, center, with graduate students Keith Dusoe, left, and John Sypek at the controls of a scanning electron microscope in their lab. (Peter Morenus/UConn Photo)

Lee, who recently received an Early Career Faculty grant from NASA, is working on one such technology. In collaboration with researchers at Ames Laboratory at Iowa State University  and at Colorado State University, he has developed a shape memory material (called ThCr2Si2-type intermetallic compounds) that can help in deep space travel by changing shape at low temperatures.

Shape memory materials can be deformed into one shape, but return to their original shape when exposed to a specific temperature, usually at high heats. Lee’s material, a solution-grown crystal, works at colder temperatures.

“What we’re creating is a shape memory material that can return to its original shape when exposed to temperatures as low as 50 kelvins, or right around -370 degrees Fahrenheit,” says Lee, a Pratt & Whitney assistant professor of materials science and engineering. “A material returning to its original shape at such a low temperature could have some interesting benefits for space travel, such as acting as an on/off switch.”

Lee and his graduate students, John Sypek and Keith Dusoe, are developing mechanical actuators that will work together with this material in the cold of space. Once a vessel leaves our solar system, the temperature drops below 50 kelvins, which will cause the shape memory material to deform and will activate the actuator, which in turn will power down the vessel. With minimal gravity in deep space, the vessel will continue in a set direction for hundreds of years, slowly making its way to its target while depowered.

If the vessel arrives at a new solar system, even the very distant heat at the edges of a star’s reach will activate the shape memory material, which would return to its original shape.

The shape change would push the actuator, which would power up the vessel’s power source and allow the unmanned vessel to begin recording and transmitting data back to Earth – long after the scientists who launched the vessel have died.

Lee says one of the reasons the low temperature at which the material activates is so important is that it means a vessel can switch on further from a star, where there’s less debris and less chance the vessel will be damaged while powered down.

Another potential use for the shape memory material is to control telescopes in space. Lee says the material can be manipulated accurately enough to control a telescopic aperture. Since telescopes have to focus on stars so far away, the amount of light the lens lets in must be incredibly precise.

“By controlling the temperature around the shape memory material, we can manipulate the lens of a telescope to within a few angstroms,” Lee said. An angstrom is a unit of measurement so small, a human hair is 500,000 angstroms thick.

Lee and his team are working to discover other uses for the new shape memory material.