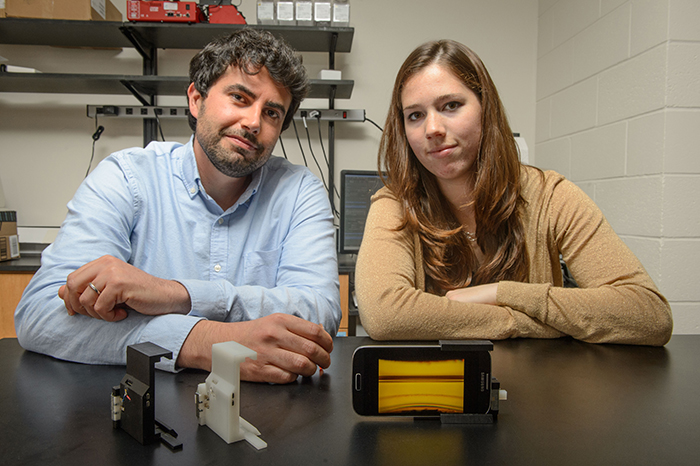 Blood tests are used to identify a number of blood disorders, but the testing process can take several days or a week before the results are available, since the sample is sent to a central testing location. A UConn startup could make the process of testing blood much quicker with a handheld device that can give results in a matter of moments.

“Rather than sending a sample to a lab and waiting three days to find out if you have a disease or another malady, our device will give you on-site and portable results right away,” said Stephanie Knowlton.

Knowlton, a graduate student in biomedical engineering, works with Savas Tasoglu, an assistant professor of Mechanical Engineering and Biomedical Engineering, in his lab. The two partnered to create mBiotics, a company that is developing a cost effective, portable device to scan for a variety of medical conditions.

“The goal is for it to be affordable to diagnose and monitor conditions such as sickle cell disease in a doctor’s office rather than go offsite,” Tasoglu said. “Right now, most of the existing equipment is too large and expensive for a doctor’s office; it has to be kept in a centralized location, which takes time to work with. We want to speed that process up.” 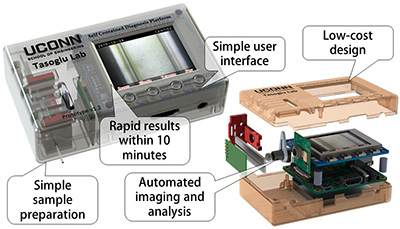 The standalone device that Knowlton and Tasoglu made. (Photo courtesy of Tasoglu Labs)

The device uses magnetophoresis- motion induced by a magnetic field- to test for a variety of blood disorders. The blood cells are levitated within a magnetic field, and the density distribution of the cells is used to test for disorders like sickle cell disease by looking at the way the cells levitate. The device can be operated with very basic training.

The blood testing technology was developed at the Tasoglu Lab by Tasoglu, Knowlton and Bekir Yenilmez, a post-doctorate researcher. Tasoglu received a 2015 American Heart Association Scientist Development Award for developing a cellphone diagnostic and monitoring device for sickle cell disease, a predecessor of this product.

“This device is totally self-contained- a standalone camera and screen that works with a Raspberry Pi module to carry out the imaging and analysis, all housed in a 3D printed case,” Knowlton said. Raspberry Pis are a series of low cost, credit card sized computers.

Knowlton and Tasoglu received support from UConn’s Third Bridge Grant, which provides startup funding for new student-developed startups with promising technologies. The Third Bridge Grant is a member of the UConn Entrepreneurship and Innovation Consortium. To be eligible for the grant, a grad student must complete the Experiential Tech Entrepreneurship Course, which encourages and develops the necessary skills for engineering graduate and post doc students to create new companies and become entrepreneurs in order to commercialize their research. Professor of Practice Hadi Bozorgmanesh developed and teaches the Experiential Tech course.

“This course is about taking the amazing research our UConn engineers are doing and creating tangible products that can benefit people across Connecticut and the world,” Bozorgmanesh said.

Knowlton said she was very appreciative of the support from the Consortium.

“We’re very fortunate to have access to the Third Bridge funding to help turn our engineering idea into something that could help people in the real world,” Knowlton said.

Knowlton and Tasoglu are using the Third Bridge Grant to finalize the prototype of their device and get input from practicing doctors using the device alongside existing lab work mechanisms.

“We’re looking for their insight on questions such as ‘How does it compare to lab testing?’ and ‘What features and capabilities in the device would make your job is easier?’” Tasoglu said.