Now a postdoctoral research fellow at UConn, Dr. Pilania joined Professor R. Ramprasad’s group in the fall of 2007 after earning his bachelor’s degree in Metallurgical and Materials Engineering at the Indian Institute of Technology, Roorkee (India). At UConn, Dr. Pilania’s research focused on designing and understanding the microscopic properties of advanced materials by means of quantum mechanical computations. Among the technological challenges he addressed were the catalytic mechanisms for industrially important reactions, the design of high energy density capacitor dielectric materials, shape control of nanostructures, and polarization control within nano-ferroelectric materials.  Dr. Pilania’s doctoral work resulted in 11 scholarly papers published in leading journals, notably the Journal of Materials Science, Nano Letters, The Journal of Physical Chemistry, Physical Review B, and Surface Science. He received his Ph.D. in May 2012.

“Dr. Ghanshyam Pilania’s doctoral work has led to the discovery of new polarization ordering in ferroelectric complex oxide nanostructures, and to new computational methodologies to quantitatively predict the atomic-level surface structures of complex oxides,” says Professor Ramprasad, adding, “The former has implications for advanced digital data storage, and the latter is expected to provide a pathway for the optimization of complex oxide compositions for catalysis applications.”

As a student, Dr. Pilania received the Best Poster of the Symposium Award at the MRS Fall 2011 meeting and won second place in the 2010 ASM Hartford-sponsored Student Speaking Contest. He also secured an NSF Travel Grant Award to visit the Fritz-Haber-Institute of the Max Planck Society, Berlin, Germany in July 2011. In recognition of his academic achievements, he was recently inducted into the Alpha Sigma Mu professional honor society at UConn. 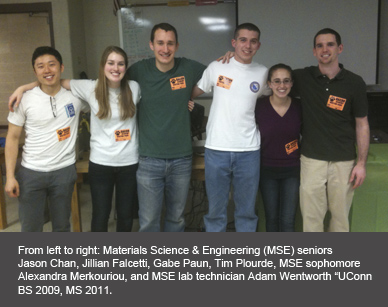 The UCMA members used demonstrations to help students understand engineering principles relating to different materials, such as the insulating effect of a space shuttle tile and the Meissner effect of a high-temperature superconductor. The UCMA team also exhibited a number of novel materials, including shape memory alloys and the world’s lowest density solid, a silica aerogel, to showcase the diverse and far-reaching applications of the discipline. They explained how materials research and discovery leads not only to exotic applications but also to everyday items such as smaller computers, long-lasting LED lights, and efficient transportation.

The chapter members also discussed some of the exciting technological challenges that materials scientists and engineers are involved in, such as biocompatible implants, carbon fiber applications, and nanomaterials. Bacon Academy students enjoyed learning about the possible career paths available to Material Science & Engineering graduates, including the sports, transportation, energy, electronics, and biomaterials sectors, among others.

The UCMA student chapter is among the most active and successful chapters nationwide focusing on outreach. It has won the prestigious “Chapter of Excellence” award twice and the “World Materials Day Outreach” award a number of times. Materials Advantage membership is open to any student.  Click here for more information about the UConn chapter.