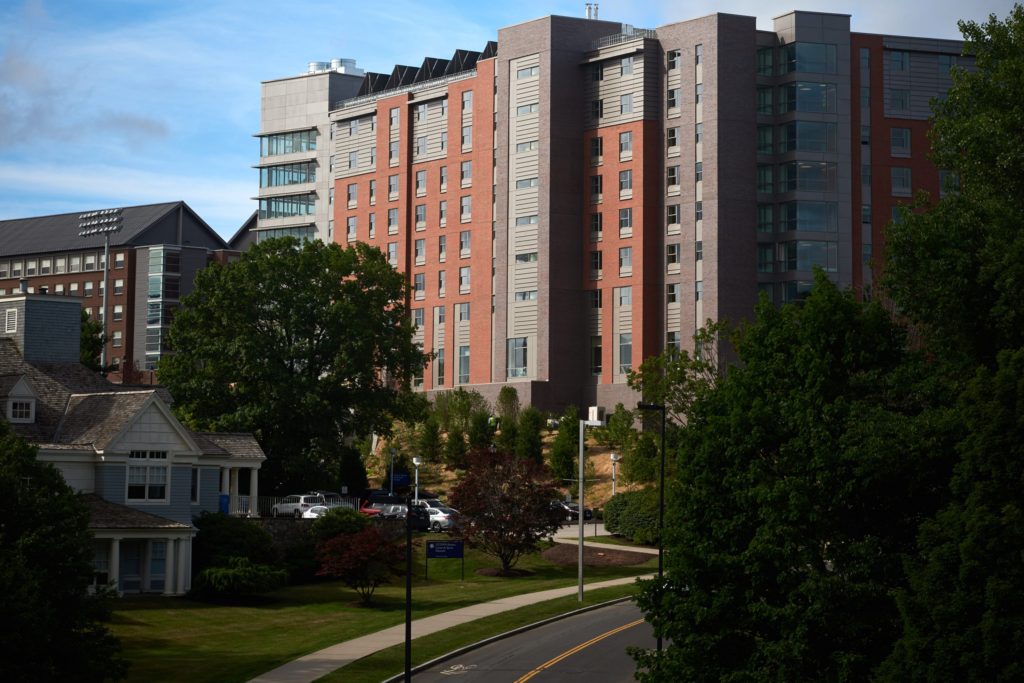 When the Governor, University leaders, the General Assembly, and the state’s business community all joined in support of the $1.5 billion Next Generation Connecticut initiative, they were thinking about the future – and they were thinking big.

That spirit is embodied in UConn’s newest residence hall, which opens its doors to more than 700 undergraduates this fall. 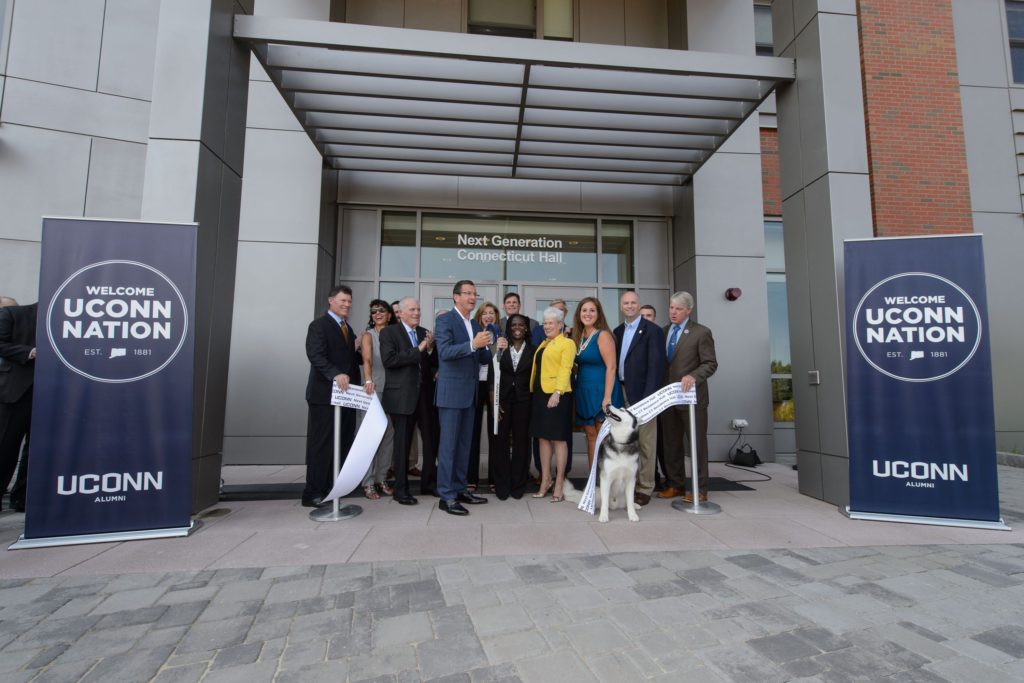 One of the tallest buildings in Storrs, with a commanding view on all sides, the 210,000-square-foot residence hall will house mainly freshmen and sophomores. Just over 50 percent will be engineering majors, while the rest will be drawn from a variety of subject areas, including other STEM disciplines.

The University officially opened the residence hall August 24 with a ribbon-cutting ceremony, as early-arriving students move in. Freshmen residents of the building will move in on Friday, and upperclassmen and transfer students will move in over the weekend.

All the students will belong to a faculty-led ‘learning community,’ a themed group designed to bridge students’ academic, co-curricular, and residential experiences. Learning communities, says David Ouimette, who oversees the program, “create a small-college feel in a large university.”

There are currently 30 such communities on the Storrs campus, of which eight will be housed in NextGen Hall. Nearly half of incoming freshmen opt to join a learning community, and many continue through their sophomore year. NextGen Hall represents the first time UConn has constructed a residence hall specifically for learning communities.

The majority of rooms are doubles, with a handful of singles, including some that are specially designed for students with disabilities, along with six apartments for hall directors and graduate students working with the learning communities.

Students living in NextGen Hall will dine in the Putnam Refectory, which has also been renovated this summer. They can do their laundry in the basement of the hall, which is equipped with 32 washers and 16 stackable gas dryers, all of them energy-efficient.

The building is designed not just to accommodate, but also to nurture the learning community experience. Each floor houses one or two learning communities – each with its own study space – and a lounge, complete with plasma TV.

The first floor offers numerous additional spaces to interact across the disciplines, including a game room; a gallery walk where student work can be showcased; and a community room. An event space, called NextGen Forum, will be used for meetings, business plan competitions, hack-a-thons, and product pitches.

An emphasis on cultivating innovation and creativity is built into the design: Also on the first floor is an Innovation Zone, or ‘maker space,’ and an Idea Lab tailored for students to learn together and work in teams to solve problems. The Innovation Zone is designed to support individual and group projects and the development of practical problem-solving skills. Equipped with such items as a mobile white board, a textile station, laser cutter, 3-D printer, and more – along with numerous safety features – this ‘maker space’ is designed to be accessible to all students. 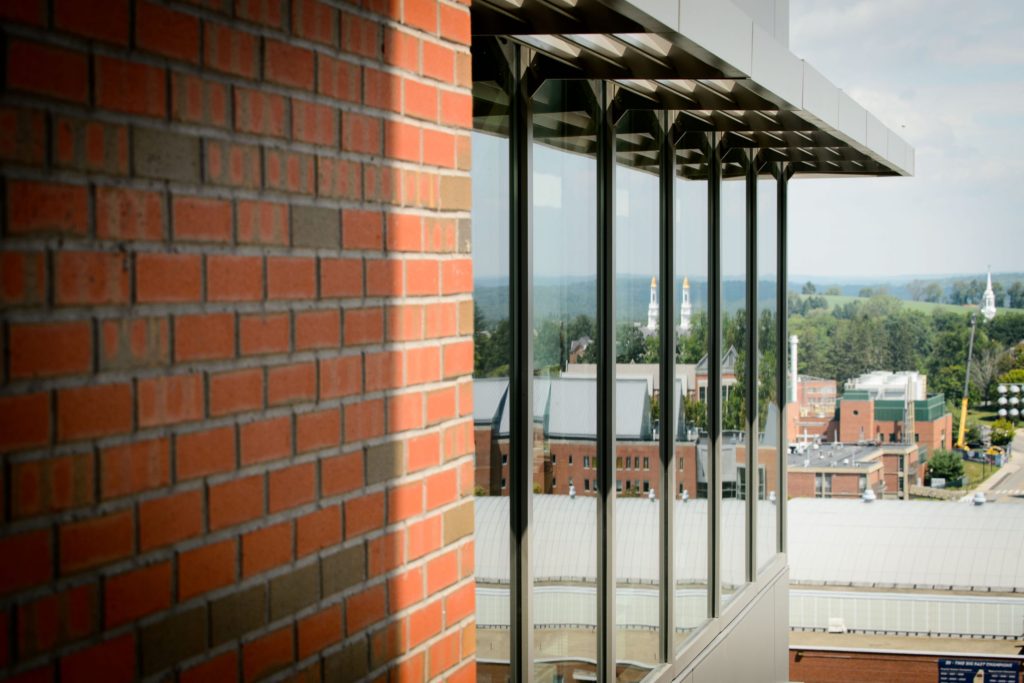 An exterior view of NextGen Hall, showing the cupola of the Wilbur Cross Building reflected in the windows. (Peter Morenus/UConn Photo)

“We’re developing a culture where students are taking the lead on all the things that come out of having a maker space,” says Melissa Foreman, learning community program manager.

“This is a paradigm shift in our thinking,” adds Ouimette.

Since ‘academic clusters’ were introduced at UConn in the new South Campus residence complex in 1998, learning communities at UConn have proved successful in helping ensure that students have a productive and varied college experience.

NextGen Hall meets the standards for the LEED Silver designation. ‘Green’ features include a roof garden; channels that direct water to rain gardens; sun shades up the sides of the building to regulate temperature; a white roof to reflect the sun; heat recovery units and solar panels to heat the water; and photovoltaic panels to help supply electricity.

In addition, an energy dashboard on the first floor informs students how much energy the building is using, while a thermostat automatically alerts the building manager when a window has been left open for a long time.

“As we shape the university the next generation will inherit, we build on [our] legacy,” President Susan Herbst noted after Next Generation Connecticut was signed into law. Fittingly, NextGen Hall is located adjacent to the Alumni Center, symbol of the generations of students that have gone before.