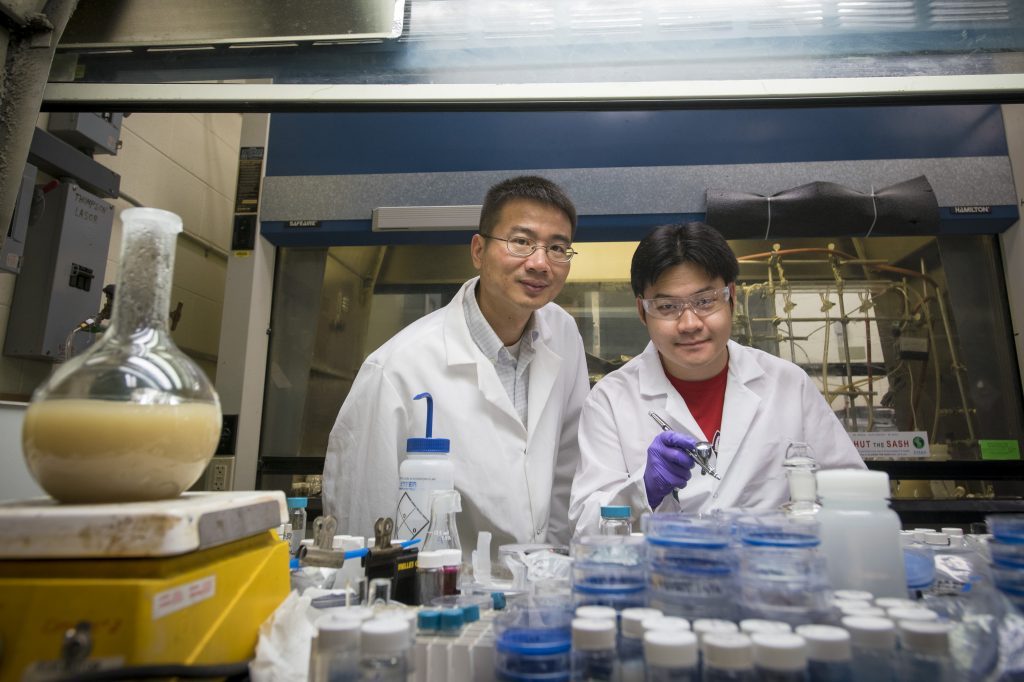 UConn engineering Professor Luyi Sun, left, and graduate student Songshan Zeng, have created new ‘smart’ materials that can change appearance and quickly revert to their original state, just like the squid and jellyfish that inspired them. (Sean Flynn/UConn Photo)

A suite of new materials developed in the lab of UConn researcher Luyi Sun can change their appearance and quickly revert to their original state, just like the squid and jellyfish that inspired them.

The research was published recently in Nature.

The materials, which are stretchable, thin, and slightly squishy, have potential applications in smart windows, display optics, and encryption technology.

“There are several marine animals that can very smartly and actively alter their skin’s structure and color,” says Sun, associate professor of chemical and biomolecular engineering who is affiliated with UConn’s Institute of Materials Science. “In this work, we follow two examples, squid and jellyfish respectively, to create different mechanical responsive devices.”

In the first case, the jellyfish’s skin is very flat and transparent most of the time, but by wrinkling its skin, it can cause a deformation that creates an opaque appearance.

Songshan Zeng, a graduate student in Sun’s lab and first author on the Nature article, says that change is likely a defensive mechanism.

Sun’s research group and collaborator Dianyun Zhang, assistant professor of mechanical engineering, decided to mimic these qualities, to see if they could develop materials that would achieve these same quick, reversible changes in appearance.

They began with a thin, rigid film, and then attached a thicker layer of soft, stretchable elastomer. When the layers are joined and stretched, the rigid layer develops cracks and folds. As this layer is stretched, the cracks and folds grow in size in proportion to the force exerted. As a result, the surface becomes rough and scatters the light that passes through, thereby changing the material’s transparency.

Zeng describes the process, “When we stretch it, we are able to change the transparency, the surface becomes rough and will scatter light that passes through, and the UConn logo underneath the sample disappears.”

Three variants on the material were created based on similar principles. By altering the qualities of both the flexible and the rigid layers – by adding pigment, luminescent, or reflective materials – different outcomes were achieved.

In one case, after dye was added to the elastomer layer, the material showed strong fluorescence as it was stretched. Stretching and releasing the material allowed open cracks to form or disappear, switching the fluorescence on or off. “The cracks are like opening and closing windows to control the penetration of UV light that is able to pass through,” Sun explains. “A larger open crack will allow more UV light through and allow the fluorescence of the dye underneath the film to be observed.” Once the stretch force is no longer applied, the cracks will close and the fluorescence disappears.

In another experiment, the material changed color. Dye was added to both the rigid thin film and the stretchy elastomer, one inlaid with green and the other with orange luminescent dyes as well as a reflective layer. Under UV light in the relaxed state, the sample showed green luminescence. When it was stretched, orange luminescence developed as the cracks occurred. “The color intensity is actually proportional to the size of the cracks or strain applied,” says Zeng.

After initial development, the material was put to the test to study its durability. To verify the integrity of the material, Zeng tested it through more than 50,000 stretch/release cycles. The mechanical responsive optical properties were not lost, despite the extensive testing.

“The robustness of the material was well demonstrated!” says Sun.

Sun says the researchers are working with partners to commercialize the material.

Zeng says there are many applications for this type of material. One possibility is to use it for smart windows. “To get privacy for windows, all you would need to do is just stretch the material a little bit to obtain opacity,” he says, adding that it could also be used as display optics for toys, or even in encryption technology.

“We are very excited for all these applications,” he adds.

Sun is now experimenting with modifying the new material. “The current material needs UV light to activate it,” he says, “but we are now modifying it to show color change under daylight.”

Sun’s group also has more bio-inspired materials with different applications in the works, with results to be published later this summer.