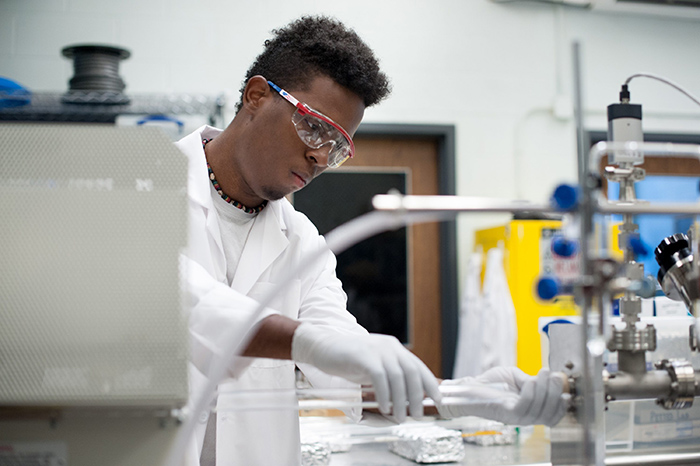 Under the leadership of the University of Connecticut, a higher education alliance dedicated to expanding diversity in the STEM fields recently received an infusion of $3.5 million to increase its efforts.

The five-year National Science Foundation (NSF) grant marks a significant commitment to the regional initiative with a national profile.

Founded in 2001, the Northeast Louis Stokes Alliance for Minority Participation (NELSAMP)  is made up of a half-dozen New England schools working to increase the number of historically underrepresented students in STEM. This fall, UConn assumed the lead role for the alliance, which includes Northeastern University; Tufts University; University of Massachusetts, Amherst; University of Rhode Island; and Worcester Polytechnic Institute.

NELSAMP has consistently raised recruitment, retention, and graduation rates for students from racial and ethnic minority groups who are pursuing undergraduate degrees in engineering and the sciences. As a result, enrollment in the alliance has increased from 1,000 to 3,800.

The UConn LSAMP Program currently supports 125 students through advising, personal, and professional development, and by providing a community of scholars on campus.

“For the next five years, NELSAMP expects to continue developing a pipeline to increase the number of underrepresented students in the STEM fields,” said Maria D. Martinez, UConn’s assistant vice provost of the Institute for Student Success.

In the coming years, NELSAMP will also pursue research into effective program outcomes, examining post-college pathways of students in order to develop a greater understanding of best practices.

Programs within the alliance provide a support framework that is essential to higher education success for many historically underrepresented students, who can be at risk of academic failure due to inadequate preparation for college, lack of role models, financial stress, and other factors. They include academic bridge programs; alliance-wide networking events; peer mentoring opportunities; support for undergraduate research and attendance at conferences and symposia; and participation in poster sessions.

LSAMP is one of a slate of UConn programs dedicated to promoting diversity and achievement among minority students.