Number 1:  Adventures for a Cause
By Heidi S. Douglas

Welcome to the inaugural edition of a new emagination column, offline!  As the name implies, this column explores our alumni’s spare time pursuits, with a particular emphasis on engineering-inspired beneficence and avocations.  For our first article, we asked Rocco Ciesco (B.S. Electrical Engineering, ‘76) what inspired him to form Vista Adventures, an entity mobilizing energetic, like-minded people for challenging physical pursuits with philanthropic outcomes.  Founded in 2011, Vista Adventures has organized climbs of 14,495-foot Mount Whitney two years running, most recently in early November.  Rocco is married, has three adult children and lives near Sacramento, 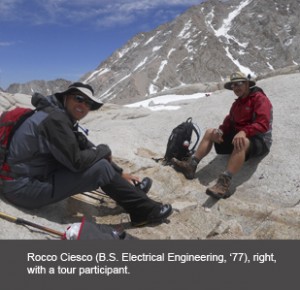 offline:   Rocco, what inspired you to start Vista Adventures?

Rocco:   Well, you reach a point in life where you accomplished all the goals you set.  You have family and friends, financial security and, luckily, good health.  So you wonder, What’s next?  And, in my case, What can I do to give back to those around me?

offline:   Was there any particular person or cause that gave you that little push?

Rocco:   Sure, it was my high school friend Chuck (‘75) who a year earlier was diagnosed with Early Onset Parkinson’s disease.  I had started walking the hills in my area to get in shape and after speaking with him one day, a day that he was having trouble walking across the room, I decided to do something to support and honor him.  By the end of my hike, I had formulated the idea of doing a benefit hike and that was the start.

offline:   How did you organize that first attempt at Mount Whitney and who joined you?

Rocco:   As with most things today, you start at the Internet.  I was able to find all the details for the climb – the routes, how long it would take, what the challenges were and what others had experienced. Message boards were invaluable to understand what I was getting into.  I knew that the field of fellow hikers would be limited to those who had time to get in shape for the hike, so either those that were in great physical shape, or who had the flexibility to get in shape.  I called a dozen or so people, and ended up with four hikers in addition to myself.   That was January 2011.  We kept in touch mostly through email and by April 2012, were holding bi-weekly chat sessions.

offline:   So, your first pursuit of Mount Whitney was inspired by your friend.  What motivated your second climb?

Rocco:   It all started with the experience from the first climb.  First of all it was fun!  It was challenging and it felt good to accomplish something that wasn’t easy.  Plus, I didn’t want it to be a one-time experience.  So the idea formed to create an event every year and name a different cause every year. That way, it stays fresh and exciting.  The idea of combining fun with good causes is very motivating to me.  I have adopted a phrase from John F Kennedy as my inspiration: “We do these things not because they are easy, but because they are hard.”  I’ve tried to impart this philosophy to my kids, because the rewards you get from difficult tasks are so much better than doing a lot of easy things.

offline:   Who benefited philanthropically from your recent climb?

Rocco:   I decided from Day 1 that I wanted 100% of the proceeds to go directly to the cause I was supporting.  I cover all administration costs as part of my effort.  So the first time, I connected with The Michael J. Fox Foundation for Parkinson’s Research where I established an account for sponsors to directly contribute to a well-known and well-respected non-profit, without me being in the middle.  We raised more than $4000 on that hike.  The second climb was inspired by my wife Jody (’78), a grammar school teacher.  I strongly believe that STEM (Science, Technology, Engineering, Mathematics) education at a young age is critical for America’s future.  The sponsors donated directly to the advanced science lab at the elementary school.

offline:   So what’s next?  Where do you want to take Vista Adventures?

Rocco:   I have always had an interest in Autism and the incidence of Autism has skyrocketed during the past 15 years.  It’s a cause with real meaning to me and I want this to be big.  So I’m adjusting the format to allow a wider range of people to participate.  I’m planning a weekend of whitewater rafting and zip-lining for May 2013.  Basically, anyone with time and a little money can participate.  I want to build a team of twenty people to both participate and recruit sponsors.  I think raising $10K is realistic.  After that, it’s a year-by-year event.  I never want to lose the ‘fun’ of it.  I want people to look forward to participating and building momentum as Vista Adventures gets to be known

offline:   Do you have any advice for people who might have a similar interest?

Rocco:   I think there are many people in a similar position, especially people who may have graduated from UConn a while ago.  The good foundation of education we received positioned us to be successful in all the things that we thought we wanted to do in our lives.  We can continue to think “bigger” about what we accomplish professionally, but also look outside, to understand more fully what “success” really means.  Keep it fun, but keep it challenging.  The sense of accomplishment will keep you young and growing.

Rocco:   Keep an open mind and don’t get locked into one path – the world is changing too fast.  Entire industries are being created, and in some cases obsolesced, in periods of ten years.  Use your knowledge as a foundation, not a wall.  Explore new avenues and get lost once in a while.  The path you least expected may be the one with the most rewards.  Be curious!