Older Cities May Be Good for Your Health

The researchers looked at street network patterns in 24 medium-sized California cities with populations between 30,000 and 100,000. They then looked for correlations between street patterns and network density and health outcomes such as obesity, diabetes, high blood pressure, heart disease, and asthma.

The health data was gleaned from about 50,000 adults who completed the California Health Interview Survey over multiple years.

What they found was that the more intersections a city had, the better people living there generally felt. An increased intersection density was significantly linked to reduction in obesity at the neighborhood level and in obesity, diabetes, high blood pressure, and heart disease at the city level. 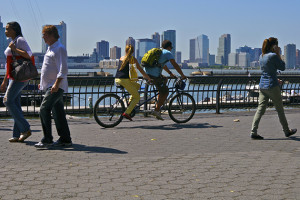 “In our initial study, we wanted to know why there was such a big difference in traffic safety between cities built earlier and those built more recently,” says Norman Garrick, an associate professor of civil engineering at UConn and one of the study’s co-authors. “We found it was due to how the street networks were designed. We built these dense, connected street networks for thousands of years, but only over the last century or so did we switch to designing sparse, tree-like networks with cars in mind.”

The study also found a correlation between wider streets with more lanes and increased obesity and diabetes rates. The researchers concluded that wider streets reflected an inferior pedestrian environment. The presence of “big box” stores also appeared to reduce pedestrian traffic in a neighborhood and was associated with a 13.7 percent rise in obesity rates and a 24.9 percent increase in diabetes rates.

“Previously, we found that people drive less and walk more in more compact cities with more intersections per square mile,” says Wesley Marshall, the study’s other co-author and a former Ph.D. student of Garrick’s who is now an assistant professor of engineering at the University of Colorado-Denver. “Now we’ve been able to link these city design qualities to better health.”

As part of the study, the researchers took into account socio-economic factors such as income level. They also considered a city’s “food environment.” They found that cities with more fast food restaurants were associated with higher levels of diabetes, while those with a greater prevalence of convenience-type stores correlated with increased rates of both diabetes and obesity.

All other factors being equal, the study showed that the healthiest cities had shorter blocks or, in other words, more intersections.

Garrick says that in Connecticut, cities like Hartford and West Hartford reflect the denser, older street design supporting pedestrian movement, while newly developed places like Avon and parts of Mansfield are examples of the more open design featuring sparse major arteries and cul-de-sacs.

The tide appears to be changing

“The new urbanist movement is building more street patterns and places in the older style,” says Garrick. Storrs Center, a cluster of apartments and retail shops surrounding a central town square near UConn’s main campus in Storrs, is a good example of the new way of thinking.

“Storrs Center is built to be a walkable place,” Garrick says. “There is a big movement back to that practice, and what we’re now seeing is that there are potential health benefits associated with building denser, walkable, mixed-use places.”