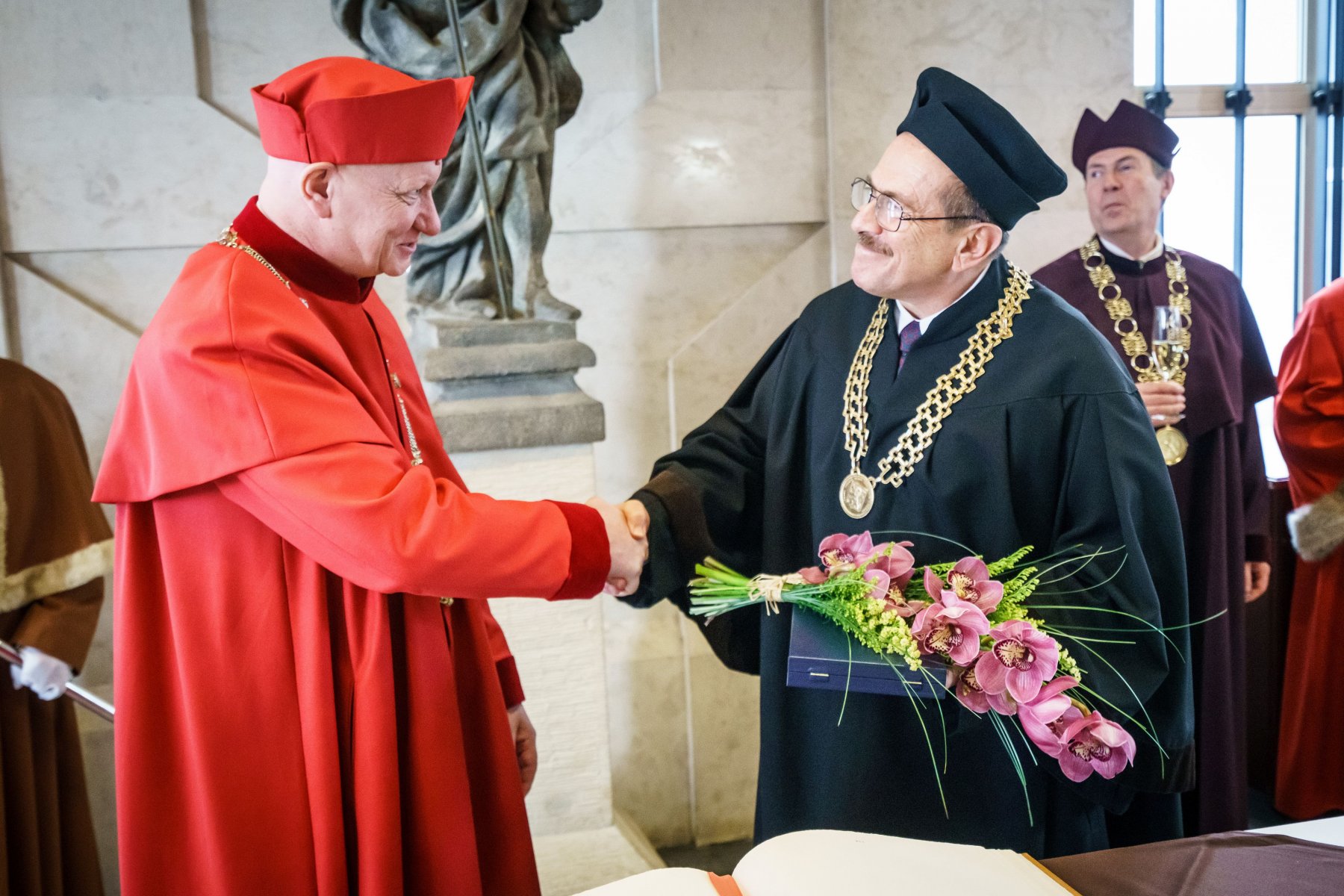 Olgac, right, receives his doctorate in a ceremony that took place on January 29. (Photo Courtesy of Czech Technical University )

In recognition of his 35-plus years of high impact scholarly work and collaborations with Czech scientists, University of Connecticut Mechanical Engineering Professor Nejat Olgac was awarded an honorary doctorate from the Czech Technical University in Prague, in a ceremony taking place on January 29.

The CTU honorary doctorate, given out since 1905, has seen 160 leaders in their field receive the award, including U.S. Presidents Woodrow Wilson and Herbert Hoover, and renowned electrical engineer Nikola Tesla.

Olgac, who joined the faculty of the Mechanical Engineering Department in 1981, received his Doctor of Science degree from Columbia University in 1976 and M.Sc. degree at the Technical Univ. of Istanbul, Turkey in 1972 (summa-cum-laude), both in mechanical engineering. Prior to joining the department, he directed an industrial operation in radio, television, and home appliance manufacturing in his native Turkey. His research interests are on time-delayed systems, vibration suppression techniques, nonlinear robust control of dynamic systems, and micromanipulation in cellular biology.

Olgac holds four patents, three on the Delayed Resonator active vibration suppression technique (1995-1996-1999)  and a fourth one on anti-chatter concepts in simultaneous machining (2011). His research has been funded by the Department of Energy, NSF, NIH, the Office of Naval Research, NOAA, the Army Research Office, GE, Connecticut Innovations Inc., Pratt and Whitney, Sikorsky, and other organizations. He is the director of Advanced Laboratory for Robotics, Automation and Manufacturing (ALARM) at UConn. Olgac was a guest professor at INRIA (France; 1988 — 89), the Technical University of Munich (1995 — 96), Harvard University (2002 — 03) and the Czech Technical University Prague (2017-18). He is a member of CASE (Connecticut Academy of Science and Engineering), a Fellow of ASME and Senior Member of IEEE, and has served as a member and chair of the Executive Committee of ASME-Dynamic Systems and Control Division.

He has served or is serving on the editorial boards of the ASME Journal of Dynamic Systems, Measurement and Control, IEEE, Transactions on Control Systems Technology, IET Control Theory and Applications, Journal of Vibration and Control, International Journal of Mechatronics and Manufacturing Systems, Bulletin of Applied Mechanics, and also served on the board of directors of American Automatic Control Council (AACC). He is the recipient of a UConn Research Excellence Award (2015) and was the ASME Distinguished Engineer of the Year in the Hartford chapter (2015).

For more information on the CTU honorary doctorate, please visit: https://media.cvut.cz/cs/foto/20190129-predani-cestneho-doktoratu-eve-jiricne-a-nejatu-olgacovi and https://www.cvut.cz/en/doctor-honoris-causa-ctu-in-prague.