Paiyz E. Mikael has been selected as the recipient of the 2015 Outstanding Senior Women Academic Achievement Award for the School of Engineering.

The Provost’s Office, the Alumni Association, and the Women’s Center annually sponsor the Outstanding Senior Women Academic Achievement Awards Ceremony, which recognizes women undergraduate and graduate students who have excelled academically within each school/college and demonstrated high achievement in research and service to the university community.

Paiyz, who will receive her PhD in Materials Science & Engineering in May, faced many obstacles as a Kurdistan refugee, including a lack of guidance through the American education system. “Being a woman from a third world country didn’t help,” she said. “My parents are super-conservative, so it was a constant struggle to prove I was doing the right thing.” But she overcame those obstacles to achieve great things – including publishing several papers in prestigious journals. In addition to her studies and being a 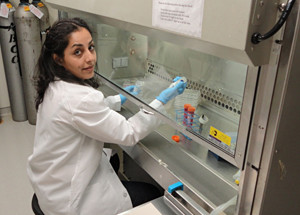 mother to a young child, she has carved time out from an exhausting schedule to help others overcome their own obstacles.

Paiyz was awarded the prestigious NSF GK-12 fellowship for two consecutive years. As a GK-12 Fellow, she worked at Prince Technical high school in Hartford and found many students in the situation she was once in, with foreign-born parents unprepared for the college preparation process. “This time I was ready, and I knew how to help,” Paiyz said. She worked with the students on college applications, and inspired most of them to apply to universities across the U.S., including five to UConn School of Engineering. Previously, few of the students considered college an option. She also promoted STEM education at Renzulli Academy, a Hartford school for gifted students, and co-organized the GE-UConn STEM Workshop for Girls.

Her academic work is no less impressive. While completing her doctoral thesis, Paiyz has written an IEEE conference proceeding, three book chapters, made several conference presentations, and is now preparing three manuscripts for publication. Last year, she won the University of Connecticut Doctoral Dissertation Fellowship Award and the University of Connecticut Health Center Graduate School Travel Award. She was a 2013 finalist for the Connecticut Technology Council’s Women of Innovation award. Paiyz also co-founded the Biomedical Engineering Graduate Student Committee and was its chair for two years.