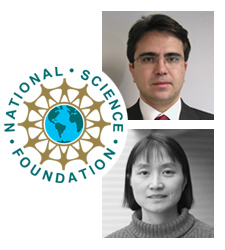 The exciting energy frontier of fuel cells is the focus of Dr. Pasaogullari’s CAREER research, which will involve polymer electrolyte fuel cells (PEFCs). PEFCs are gaining interest as a possible portable power source capable of energizing automobiles, as envisioned in the future “hydrogen economy” championed by President Bush. In addition to automotive applications, they have diverse uses in any situation requiring portable power, such as powering radios for soldiers in remote locations, and in stationary power generation. PEFCs convert hydrogen to electricity without producing pollutants, in contrast with fossil fuels, which are known to produce sulfur dioxides, nitrogen oxides and particulates associated with global climate change and possible health risks.

Dr. Pasaogullari will focus on the principal component of PEFCs, the membrane electrode assemblies, or MEAs, that convert hydrogen into electricity. An MEA is something like a layered sandwich (think layers of sliced turkey, cheese, mayo and mustard between slices of bread). The MEA includes two catalyst layers, in this case a thin layer, mainly of platinum approximately 10 micrometers in thickness, contained in the middle between layers of carbon paper overlain by bipolar plates. A PEFC stack contains 200-400 of these “sandwiches” stacked together. Owing to the high cost of platinum (over $1,750/oz in early February), it is critical for researchers to improve the performance and durability of MEAs before PEFCs can become economically viable in autos and other applications.

Dr. Pasaogullari will focus his attention on gaining a better understanding of what happens at the interfaces between the carbon layers and the platinum catalyst layer. He explained that the surface-to-volume ratio is very high in MEA components: that is, because they are extremely thin and broad, their surface properties greatly influence the transport of protons, electrons, hydrogen, oxygen and water between the layers – thereby impacting the overall performance of the fuel cell.

In seeking to understand interfacial activity, Dr. Pasaogullari will pair computational and experimental study. Dr. Pasaogullari will characterize the interfaces using imaging facilities operated by several national laboratories. Based on this characterization, he will next digitally reconstruct the interfaces and then develop computational models describing the multi-phase transport processes at a level of detail that is currently impossible to experimentally investigate. A critical component of his research involves validation of the predictive model using non-intrusive techniques such as neutron imaging experiments, which will take place at the National Institute of Standards & Technology. The ultimate benefit of this research, said Dr. Pasaogullari, is that it will help fuel cell component designers develop durable, low–cost, high performing MEAs, resulting in better-performing fuel cells.

Dr. Wang’s CAREER research will focus on fault management of wireless networks with the objective of assuring greater stability and longer service life. Wireless networks, in their various forms, have become an integral part of our daily work and lives. They are widely deployed in coffee shops, airports, homes, and offices to allow untethered access to the Internet; they are widely used in military and civilian applications (e.g., disaster relief and humanitarian missions) to allow mobility and quick setup; they are also widely used in scientific applications and health care to constantly monitor the environment and patients. This wide deployment and our growing dependence on wireless networks reinforce the need for fault management of these networks to ensure that they remain stable.

“Wireless networks are more vulnerable to errors and failures than wired networks. They also have more dynamic topologies, and are more resource constrained,” Dr. Wang explained. Therefore, wireless network management faces a range of unique challenges, and she will focus on developing suitable architectures and techniques to meet these challenges. Her CAREER award will primarily concentrate on WiFi and sensor networks. These types of networks represent two “extremes.” WiFis are single-hop networks with infrastructure support; while sensor networks are multi-hop networks, with no infrastructure support and more stringent resources constraints. For WiFi, she proposes a novel management architecture and will develop a series of management techniques to detect unauthorized devices, monitor the health of the network, and locate faults when they occur. For sensor networks, she will develop a suite of diagnostic tools to detect links and nodes that are in abnormal conditions. She will draw upon the areas of statistical analysis, optimization, stochastic modeling, and machine learning to develop these techniques.

Furthermore, Dr. Wang plans to implement these techniques and evaluate their performance using a combination of analysis, simulation and experiments. She expects her findings in these two “extreme” types of networks will shed light on the management of other types of wireless networks, including wireless mesh networks, ad hoc networks and underwater sensor networks. Dr. Wang will also develop undergraduate and graduate coursework involving wireless networks.