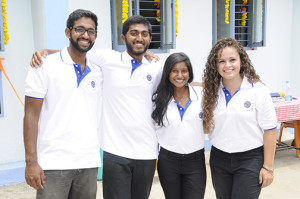 HYDERABAD, India, July 15, 2015 – Pratt & Whitney, a unit of United Technologies Corp. (NYSE:UTX), and its supplier partners today announced the expansion of the girls dormitory in cooperation with the Kasturba Gandhi National Memorial Trust (KGNMT) in Hyderabad, India. UTC, Pratt & Whitney and its supplier partners contributed more than $55,000 USD (34,90,000 INR) for a new kitchen and dining hall with environmentally-friendly facilities.

The residence provides local, elementary-school age girls from difficult circumstances with a modern home and study resources. The expansion includes professional quality cooking equipment and kitchen items as well as an expansive dining hall to accommodate larger gatherings for meals and meetings.

“Both UTC and Pratt & Whitney are committed to improving the lives of the people in the communities in which they operate,” said Jayant Sabnis, vice president, Engineering–Module Centers, Pratt & Whitney. “We understand that a comfortable place to sleep, eat, learn, gather and socialize – such as in this new kitchen and dining hall – is important to an individual’s success. As an advocate for India’s next generation of skilled workers, we are honored to support this in partnership with the Kasturba Gandhi National Memorial Trust.”

The project was executed by Engineers Without Borders India (EWB-India) Hyderabad Chapter and students from the University of Connecticut. In addition to Pratt & Whitney and UTC, Belcan, QuEST Global Engineering, Cyient, RGBSI, Genpact, Jaisara, CDI Corporation, and two individual donors provided financial support for the project.

Pratt & Whitney’s support for the KGNMT project builds on the charitable donations it has made in India over the last decade. Last year, Pratt & Whitney along with UTC and its supplier partners donated $113,000 USD (71,72,000 INR) to construct the residential building for girls at KGNMT. And, since 2004, Pratt & Whitney has made annual contributions to the Association Saikorian that now total more than $186,000 USD (11,805,000 INR), including this year’s contribution of $19,000 USD (12,06,000 INR). Additionally, Pratt & Whitney has funded major projects at Krushi Home and schools in the village of Gowdavally, Hyderabad, as well as ten e-learning centers in Bengaluru.

Kasturba Gandhi National Memorial Trust was founded by Mahatma Gandhi in 1945 and now has 22 branches across India. Each center works toward various social, cultural, health, education and livelihood activities for women empowerment and child welfare. The center in Hydershakote, Hyderabad, was established with particular focus on improving the lives of women and children living in rural villages located in and around Hyderabad and the Ranga Reddy district. For more information about KGNMT, visit www.kgnmt.org.

Pratt & Whitney is a world leader in the design, manufacture and service of aircraft engines and auxiliary power units. United Technologies Corp., based in Hartford, Connecticut, provides high-technology systems and services to the building and aerospace industries. To learn more about UTC, visit its website at www.utc.com, or follow the company on Twitter: @UTC.