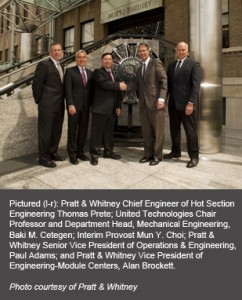 Pratt & Whitney made another generous annual gift to the University of Connecticut School of Engineering and the Mechanical Engineering Department aimed at further strengthening the collaboration with its Center of Excellence at UConn for engineering students and faculty.

The 2012 annual gift has enabled UConn to install new additive manufacturing equipment, donated by Pratt & Whitney for use at UConn’s Depot campus, and also supports the purchase of a state-of-the-art laser diagnostics system for combustion research and other applications.

“This gift further underlines the strong commitment between UConn Engineering and Pratt & Whitney to advance the state of the art in gas turbine technology and to train a new generation of aerospace engineers who are adept at solving real-world technological challenges,” said UConn Interim Provost (then Dean of Engineering) Mun Choi.

The annual gift enhances the educational programs available to UConn engineering students and leverages the activities and resources of the Pratt & Whitney Center of Excellence at the university.  Last year’s P&W gift to UConn was used to purchase a demonstration gas turbine engine that provides students with experience in jet propulsion.

“Our relationship with the UConn School of Engineering signifies Pratt & Whitney’s continued commitment to a long-term, productive relationship with the educational community.  We are excited by the engaged dynamic that has been created with the University of Connecticut, and we look forward to continuing to build on this relationship in the years ahead,” said Prete.

The Pratt & Whitney Center of Excellence at UConn, which was established in 2010, is focused on fundamental and applied research initiatives that support the design and development of more efficient gas turbine engines.  UConn’s primary research is in the field of advanced sensors, diagnostics, and controls. 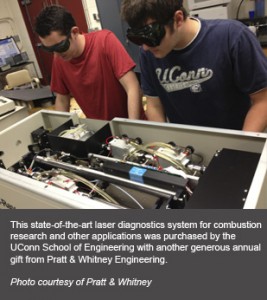 he UniversityofIllinois, Urbana-Champaign, who spoke on “Evaluating the Potential Effects of Aviation Emissions on Climate.” Pratt & Whitney also provides annual support for research and development projects.

A dynamic and collaborative relationship between commercial industry and academic institutions is integral to developing the well-trained, agile engineers who will build the 21st century. UConn and Pratt & Whitney and United Technologies Corporation have a lengthy and highly symbiotic partnership spanning decades.

Pratt & Whitney employs many UConn engineering graduates, and faculty work side-by-side with P&W engineers on various fundamental projects. This close relationship has produced dividends for students, graduates, researchers, and the State of Connecticut.