This Saturday, May 9, School of Engineering graduates will get a send-off from commencement speaker, Priceline’s founding CTO, Timothy “Scott” Case.

A UConn Engineering alum and Connecticut native, Case has made a name for himself as an innovative entrepreneur, humanitarian and technology pioneer.

In 1996, he became the founding CTO of Priceline, popularly known as the “Name Your Own Price” company 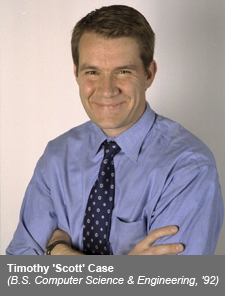 . It was one of only a handful of startups in U.S. history to reach a billion dollars in annual sales in less than 24 months. He was responsible for building the technology that drove Priceline’s incredibly fast growth as a business. His entrepreneur days, though, began at UConn, where Scott graduated with a bachelor’s degree in Computer Science and Engineering in 1992. As a senior, he co-founded Precision Training Software, which launched the world’s first PC-based simulated flight instructor and photo-realistic flight simulator.

His career has focused on using the power of entrepreneurship for social change. In 2006, he joined Malaria No More, a nonprofit organization that has distributed malaria nets to more than 5 million people 17 African countries. In 2011, Scott was named founding CEO of the Startup America Partnership (now known as Up Global), which gives startup companies access to valuable relationships, opportunities, and information. Most recently, Scott co-founded Main Street Genome, which aims to reduce failure rates and produce better results for millions of business owners. Scott also serves as the Chairman of Network for Good, a national nonprofit that has distributed more than $475 million to 60,000 nonprofits and provides online fundraising and communications services to over 5,000 nonprofit organizations.

The School of Engineering commencement ceremony takes place at Gampel Pavilion, and starts at 9 a.m.