The School of Engineering will lose two of its most senior, esteemed faculty members in coming weeks, with the retirements of Civil & Environmental Engineering professor John DeWolf and Mechanical Engineering associate professor Robert Jeffers. 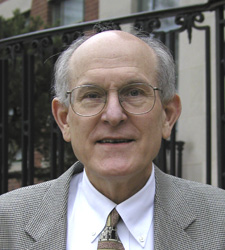 During his 35 years at UConn, Dr. John DeWolf has educated hundreds of civil engineers and received numerous awards for his instructional excellence, including being named a University of Connecticut Teaching Fellow in 2006. Steel Design is among his primary course offerings. His integration of writing assignments into senior-level classes resulted in his receipt of the American Institute of Steel Construction (AISC) Educator Career Enhancement Award. A course favorite is his “Cathedrals – Engineering and Construction” First-Year Experience course, in which students explore how these lasting edifices were built without modern engineering principles. He has been a long-term member of the University Senate, and at different times he has been the Chair of the University Senate Executive Committee.

John has co-authored several editions, with F.P. Beer and E.R. Johnston, of the widely acclaimed Mechanics of Materials, considered the premier undergraduate text on this fundamental subject. The book has been translated into Chinese, Greek, Italian, Korean, Portuguese and Spanish. He is also Associate Editor of the journal, Structural Health Monitoring. John serves on the Connecticut Board of Examiners for Professional Engineers and Land Surveyors.

Bridge monitoring has been the focus of John’s research since 1983. He developed and installed a prototype bridge monitoring system, which was placed on two different Connecticut bridges for long-term evaluation. His involvement in strain monitoring studies on a large number of steel and concrete bridges has provided transportation agencies with useful information for the management and renovation of a variety of bridges. He is lead investigator on a long-term research project involving the installation of permanent monitoring systems on a network of Connecticut bridges. Other research studies have dealt with the analysis, design and evaluation of stability for steel structures used in both buildings and bridges.

Commenting on John’s career, Dr. Michael Accorsi, department head of Civil & Environmental Engineering, said “John has excelled in all aspects of university life. His teaching, research and service have been exemplary, and he has made a lasting impact on our department and on the university as a whole. John has palpably touched the lives of innumerable UConn students.” In his retirement, John plans to continue his research and to mentor upcoming faculty who will assume responsibility for the bridge monitoring program. He will also continue to collaborate on mechanics books for McGraw-Hill. He and his wife, Sue, look forward to the opportunity to travel more extensively.

John and Sue established an undergraduate academic scholarship, and they invite friends and alumni to donate toward the John T. and Susan B. DeWolf Scholarship fund in Engineering. For information about making a donation, please contact Noreen Wall at (860) 486-5394 or by e-mail at noreen@engr.uconn.edu. 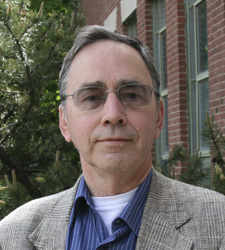 Dr. Robert Jeffers began his UConn career 40 years ago, when he accepted a position as an instructor in the Mechanical Engineering (ME) Department. He quipped that when he arrived at UConn after earning his Ph.D. at the University of Pennsylvania, Arthur Bronwell and Homer Babbidge were real people – not just names on buildings. Bob served as acting department head and head of ME for 13 years during a time of explosive growth for the department and its undergraduate population. Besides overseeing the hiring of many of the department’s top faculty, he enjoyed seeing them prosper in their careers.

One of the great joys of his job, he said, has been the opportunity to interact with gifted undergraduate students. A graduating senior recently stopped by to say that he chose UConn because, during a college tour with his family, the student was lucky enough to have Bob as his tour guide. In recent years, Bob said he has found himself teaching the children of former students.

Bob has worn many hats during his career. He led the ME department through several cycles of ABET accreditation reviews and initiated the Management & Engineering for Manufacturing B.S. degree program with the School of Business. The idea emerged from discussions with industry contacts who expressed a desire for engineers who also possessed business skills. The MEM program was reviewed by a national accreditation team over the last year and is expected to receive accreditation.

He held numerous Connecticut chapter and regional offices within the American Society of Mechanical Engineers (ASME). Nationally, he served as a Region I Vice President, a Senior Vice President of the Council on Member Affairs (’98-01) and a member of the Board of Governors (’01-’04). He also served on the University Senate, where he held various committee leadership positions; was a member of the Connecticut Department of Higher Education Transfer Articulation Committee; and was faculty advisor to Tau Beta Pi.

Following his retirement, Bob said he may remain actively engaged as an undergraduate advisor to the department. He looks forward to spending more time with his wife, Diane, their children and four grandchildren, and to mastering low-fat, low-cholesterol cooking.

Dr. Baki Cetegen, department head of ME, said “Bob has been a constant source of help for several generations of our students. Mr. Steven Heath, former president of Pratt & Whitney Commercial Jet Engines and one of Bob’s former students, recalls that one of the most memorable classes he took was with Bob. Some of our recent graduates for whom Bob served as academic advisor have written to me to express how grateful they are for the advice he provided them. Bob is a very dedicated and well-respected colleague who has served our department for 40 years. We wish him and his family a very happy, healthy and active retirement.”