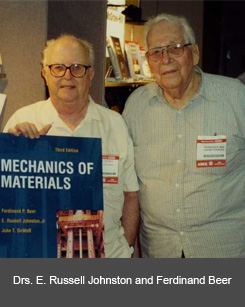 The role of teacher is almost certainly the most satisfying one embodied by any academic, and few UConn professors have equaled the impact of the late E. Russell Johnston Jr., who taught Civil Engineering at UConn for 26 years (1963-89) and served as Department Head from 1972-77.  During his quarter century at UConn, and his years at Lehigh University and Worcester Polytechnic Institute (WPI), Dr. Johnston instructed thousands of students in the principles of structures, mechanics and materials. But it was through his textbooks that he solidified his influence on multiple generations of civil engineers.

Dr. Johnston received his B.S. in civil engineering at the University of Delaware and his Sc.D. in structural engineering from MIT. He began his academic career at Lehigh University in 1949, and it was there that he met Ferdinand Beer. The two are credited with reorganizing the school’s courses in statics and dynamics, evidently to conform to their shared belief that students learn best via a foundational approach rooted in basic principles and supplemented by relevant graphical images.  In developing their revamped courses, the two would work together, writing their lecture notes and brainstorming interesting problems they felt would appeal to future engineers.  This close collaboration led to their first book, Mechanics for Engineers.

By the time they published their second edition of the book, Dr. Johnston was ensconced at WPI, where he had accepted a faculty position in 1957. Another career move to UConn followed, and the third edition of Mechanics for Engineers was published.  Despite their distance, the two maintained their habit of co-writing and editing the texts while serving at different institutions, through regular telephone conversations and mail, as well as family visits.

Civil & Environmental Engineering professor Howard Epstein, who was a colleague of Dr. Johnston, first became aware of Dr. Johnston through the first edition of the Mechanics for Engineers: Statics book, which he fondly calls “the bible” for its impact on civil engineering education.

Recalling him as a quiet man with a wry sense of humor, Dr. Epstein offers, to illustrate his point, a 1977 short paper published by Dr. Johnston in the Journal of Irreproducible Results, a largely tongue-in-cheek vehicle for witty academics. The paper revealed Dr. Johnston’s simplified arithmetic process for calculating certain “johnston numbers of the first kind” fractions. The paper contained four examples, and ended with a scholarly note accompanying the paper, which informed readers that “Just prior to publication it was proven that only four Johnston numbers of the 2 over 2 variety exist; the fact that they constitute a finite set will certainly simplify the determination of their true worth.”

During his years at UConn, Dr. Johnston mentored a number of doctoral students, of whom Robert Fitzgerald (Ph.D. ’69) was the first. Only six years his junior, Dr. Fitzgerald felt fortunate to have had multiple relationships with Dr. Johnston. In addition to the normal student-professor association, the two often discussed a wide variety of subjects, including the philosophy and process of teaching engineering subjects and writing books. Dr. Fitzgerald notes that Dr. Johnston had a broad range of knowledge as well as all of the attributes one would want in a teacher and role model. “One of his greatest gifts was an ability to take very complex concepts and systematically organize them into bite size pieces that could be easily digested.  Whether teaching elementary statics or a graduate course on the theory of elastic stability, Dr. Johnston’s ability to help the student develop an analytical understanding was unequaled. The organizational clarity of his books reflects this trait. Russ Johnston was one of a kind.”

In nominating his colleague for an award some years ago, Dr. Jack Stephens (now deceased) wrote: “Students remember the many unusual illustrations he used to demonstrate engineering principles. His teaching aids were often creative and unusual, such as the use of cans of different varieties of Campbell’s® Soup to demonstrate dynamic principles….Texts of Ferdinand P. Beer and E. Russell Johnston have outsold all other engineering books in [the] western world.”

The books authored by Drs. Johnston and Beer have retained their place as mainstays used by millions of students in colleges and universities worldwide, and they have been translated into Japanese, Greek, Chinese, Spanish, Portuguese, Turkish, French, Indonesian and other languages.  For their enormous contribution, both authors received numerous honors. Dr. Johnston received the Archie Higdon Distinguished Educator Award (Mechanics Division of the American Society for Engineering Education) in 1994; the Excellence in Teaching Award (UConn) in 1984; the Western Electric National Award for Excellence in Teaching (ASEE) in 1968; and the Outstanding Civil Engineer Award from the Connecticut Section of the American Society of Civil Engineers.

Dr. DeWolf remarks of his friend and colleague: “He loved working with students and faculty.  He was regarded as a master teacher, master educator, and a true gentleman.”

One of Dr. Johnston’s two sons, Dr. Bruce P. Johnston, recalled a revelatory moment when he fully understood that his father was an exceptional instructor. While home from college for a brief visit, Bruce decided to attend an introductory class his father was teaching at UConn. “There were about 200 people in the lecture hall. I had attended many large classes myself as a student and observed that large lecture courses typically have a mix of students who are very engaged, students who are completely disinterested – perhaps reading or sleeping, and students who fall somewhere in the middle. As I looked around my dad’s class, I realized that virtually all of the students were paying sharp attention.  I knew he was a dedicated researcher and professor, but it was the first time I truly recognized how much he invested in being a good teacher.”

Bruce recalls that his dad was “24/7. He personally solved every problem and read every page of the book galleys to ensure accuracy.  He once affixed a fat stack of $2 bills together and would tear off a $2 bill and hand it to any student who found an error in his textbooks. Even at home, he would ponder how everyday objects exemplified physical principles. Opening a can of chicken noodle soup, he would remark on the difference in viscosity between it and a can of tomato soup.” Yet despite the analytical, scholarly approach he brought even to family life, Bruce notes that his father always included the family in his professional life. Conferences in California were not just scholarly platforms; they were also opportunities for the family to tag along on cross-country vacations, often with a travel trailer in tow.”

When he died in 2010, Dr. Johnston left behind not only his beloved wife, Ruth, sons E. Russell Johnston, III and Bruce Johnston and their wives, and grandchildren, but countless students across the globe whose learning was informed by his wise foundational lessons.  Like learning, Dr. Johnston saw education as a life-long process that demanded support. The E. Russell Johnston, Jr. Memorial Award was established in 2012 to sustain his educational legacy; you may contribute to the scholarship fund by contacting Donald Swinton at (860) 486-8923.