Perhaps it was Wally Bowley’s unorthodox, yet effective method of teaching that made him an iconic professor during his time at the University of Connecticut. Maybe it was the ten patents he held in the fields of engineering. Or, perhaps it was the countless lives he touched as a loving father and as a mentor to his students. Or maybe, just maybe, it was a little bit of everything that made a man like Wallace Bowley unforgettable.

Wallace William Bowley (1932 – 1991) grew up in Burlington, VT. and attended Burlington High School from 1947 to 1951. Initially, Dr. Bowley’s family could not afford to send him to college. However, he was ultimately able to attend due to an academic scholarship he received from Norwich University, located in Northfield, VT.  He graduated in 1955 with a bachelor’s degree in mechanical engineering. After spending a summer at home earning some money driving trucks and tinkering with his Indian motorcycle, he entered graduate school at Rensselaer Polytechnic Institute in the fall of 1955.

Due to his military service commitment from Norwich University, Dr. Bowley was required to enter the Army after graduating from RPI in May of 1957 with a master’s degree in mechanical engineering. As a 1st Lieutenant in the Army’s tank division in Fort Knox, KY, he was recruited by Pratt & Whitney to work on a top secret project – the SR-71 “Blackbird” jet engine. These engines power the SR-71 to speed records reaching three-times the speed of sound (Mach 3) and this aircraft still holds the Official Airspeed Record for the fastest manned air-breathing jet craft. One can be seen i 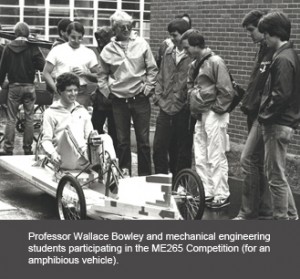 After a year with Pratt & Whitney in Florida, he decided to go back into teaching full-time; he accepted an offer at his alma mater, Norwich University.  Dr. Bowley continued to perform consulting work for Pratt & Whitney/United Technologies Research Center for the rest of his life.

While teaching at Norwich University, Dr. Bowley was invited to return to UConn to pursue a Ph.D.  He accepted and moved his small family to Storrs in the fall of 1962.  When he received his doctorate in June of 1965, he was one of the first individuals to graduate from UConn with a Ph.D. in engineering and was offered a faculty position in the mechanical engineering department at UConn – a rarity in academia, which generally does not hire their own graduates.

His career thrived. In 1966 he was awarded the Student Senate’s Distinguished Faculty Award.  Dr. Bowley was named Assistant Dean of the School of Engineering from 1968-1986, and he died unexpectedly while still serving at UConn as a professor, in October of 1991.  During his tenure at UConn, he graduated the most Ph.D. students of any faculty engineering member: his inspirational way of teaching attracted many students who sought him as their mentor.

In early 1973, Dr. Wallace Bowley filed for what would be his first of ten issued patents in the field of engineering. “Inventing is the fun part of engineering,” said Dr. Bowley in a 1976 interview with the Hartford Courant. “The key to the art is not to be tied to convention, and not be afraid to be thought of as ‘different.’ It is important to be a bit of a radical.”

And that he was. As one of Dr. Bowley’s former doctoral students, Dr. John Cowles, said, “Wally was not bound by traditional thoughts and ideas.  He was a great influence, because where everyone else saw the world as it existed, Wally saw a world that could be made better. He was always reaching for the sky.”

Dr. Bowley expressed this not only through his lifestyle, but also through his teaching methods. “The students all loved Wally,” said colleague Dr. Bob Jeffers. “He engaged and excited them through different approaches to engineering. Most students found him to be a great teacher, and the experiences he offered the students were nearly invaluable.”

Dr. Bowley is responsible for structuring two senior design classes. One, ME 264, is a unique, often grueling class that proved to be a sort of “right of passage” for mechanical engineering students and focused on analysis methods taught in a novel way by Dr. Bowley.  Years later, many graduates would return to Storrs to thank their former professor for bringing everything together for them and giving them the tools to solve real-world engineering problems.  Dr. Bowley developed a second class, ME 265, the second in a two-part sequence.

“The spring class was where Wally really shared his creativity with his students,” said former colleague Dr. Lee Langston. “Wally was always trying to get them to do new and exciting things. Nobody could continue the class when he was no longer here,” said Langston. “We just weren’t as creative.”

The format for ME 265 involved one problem, which everyone would focus on solving during the next 14 weeks.  Each group would work in secret toward development of a prototype machine, which would best solve the problem given.  The assignment culminated in a group presentation to the class on a Friday evening prior to “Competition Day,” where each group design was finally revealed. The next day, each group would finally put their prototype design to the ultimate test: how well does the design perform at the task versus the other groups?

“Students worked on the same project in teams of three-to-four people. The student groups tested their designs in real life. It taught them two things: one, these things that they learned in textbooks could really be used in the real world, and two, the most important thing is that they learned to work as a team,” said Dr. Peter McFadden, former Dean of Engineering, in a 1991 interview with the Courant. The projects he would engage them in went beyond the traditional classroom expectations and included a hand-powered bicycle, an amphibious vehicle, and even a robotic climbing mechanism.

“It was by far the most interesting, valuable and labor intensive course I’ve ever taken,” said daughter Dr. Susan M. Bowley, who received her B.S. in mechanical engineering at UConn before earning her graduate degrees at Stanford University and the University of Virginia. “And don’t think he let me off easily because he was my Dad,” she joked, “He was one of the toughest graders I’ve had.” 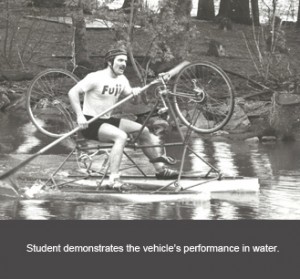 Dr. Wally Bowley wasn’t just an exceptional teacher; he was an admired and effective mentor as well.  Dr. Cowles remarked that it was Dr. Bowley who urged him to pursue a doctoral degree.  “Talking to Wally helped convince me that the right thing to do was come back to school full time,” said Dr. Cowles. “He gave me an inspirational talk and convinced me to stay on [after my M.S.] and pursue a Ph.D., which I did with him as my major advisor.  I graduated in the spring of 1990.  I believe I was his last Ph.D. student to graduate that year, just before he passed away in the fall of 1991.”

“My life has been changed by Wally. Wally taught me, and all the students who would listen, that no problem is too big. That philosophy has helped me throughout my career,” noted Dr. Cowles.  “I miss him. There have been many times I would have liked to talk to him throughout my career. Unfortunately, he was taken from this world much too fast.”

Dr. Bowley was a pioneer in green energy, decades before it was politically the hot topic that it is today.  During the 1970’s, he actively pursued research in solar energy, and his lobbying efforts finally led to the establishment of the solar research efforts at UConn.  Dr. Bowley also served as Director of UConn’s Energy Research Center, which was funded by the State of Connecticut to provide uniform testing on solar panel designs. The testing facility was located on the roof of the Engineering II building on the UConn campus, and served as the only laboratory in the Northeast certified to test both air and liquid heating collectors using natural sunlight. This was at a time when a number of companies were offering such a product, but with little-to-no standards for quality.  For solar panels to be sold in the state, vendors needed certification from the UConn center.

The center’s influence extended well beyond the scope of on-campus research. In 1979, President Jimmy Carter’s administration called upon UConn’s Energy Research Center to assist in optimizing the performance of a solar water heating system installed on the roof of the White House, directly above the Oval Office. This set a nationwide example for alternative energy sources, and Dr. Bowley was the pioneer. The panels were removed in 1986 during a roof renovation under President Reagan’s administration. Today, one panel resides at the Smithsonian’s National Museum of American History, one at the Carter Library and another is displayed at the Solar Science and Technology Museum in Dezhou, China.

“Aside from all of his patents and research, my Dad was just a really great teacher. He absolutely loved teaching,” said Dr. Susan Bowley. “He never pressured me to go into engineering,” she said, “But he had a great influence on helping me to decide to pursue engineering – and thank goodness he did!”

“As a kid, I can remember him showing the family his films on testing of his blood-oxygenator designs, playing out in the cool tree-house he made for us, visiting the ocean to see his weird wave barrier designs launched,  walking with him in the backyard and hearing about how much appreciation he had for nature, then being able to see all the fascinating ME 265 design projects through the years and meeting his students, and finally having him as my teacher for ME 264 and 265,” said Susan Bowley. “He was my teacher for his whole life.”

Wallace W. Bowley spent his life sharing his appreciation for engineering with others. His intellect was unique, and it should not be forgotten. Because like Bowley himself said, “Everything starts by overcoming friction; of one form or another.”

If you would like to share a photograph or story of your own about Wally, please feel free to e-mail his daughter Susan at bowleyconsulting@gmail.com or contact her via phone at (800) 273-5170 x4. Additionally, a website is being created by the Bowley family to serve as a “living tribute” to Wally. If you would like to be involved in this website project in any way, please contact Susan directly.