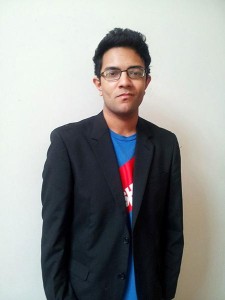 Dipayan Ghosh is a UConn alum who currently works in privacy and public policy for Facebook. He’ll be a part of our Engineering Centennial Lecture Series, speaking on April 11 in Laurel Hall, room 101.

He was previously a technology and economic policy advisor at the White House and was recently named to Forbes “30 under 30” list, which celebrates influential individuals in a variety of fields who are under 30 years old. UConn Engineering asked him a few questions, as a prelude to his talk.

How did your time at UConn help to prepare you for the interesting directions your career has taken?

My career has been grounded in my technology background, which I have attempted to apply in the business and policy world. I made my first steps at UConn as an undergraduate in electrical and computer engineering. During my time in Storrs, three aspects of my education really inspired and motivated me. The first was the quality of the academic community in the electronic and computer engineering (ECE) department. I had a chance to work with Professor Peter Luh, a chair of the department and former department head, who gave me the incredible opportunity to work at his lab as an undergraduate researcher. That exposed me to difficult research problems in mathematics and optimization, and gave me access to a brilliant group of lab mates. Second, the quality of the education. I found myself working quite a lot as an undergrad – and that was not only because the subject material itself was difficult, but also because our professors really challenged us to think outside the box. I recall a couple classes in particular that had my ECE class stumped more often than not. I was part of the honors and University Scholars programs through the undergraduate center, as well, which kept me busy with technical research alongside regular coursework. And third, the quality of my classmates and peers at the school; the ECE pool was a close-knit group of very talented students that worked as a team. That type of support network really helps you as an undergraduate.

You’ve had a very interesting career path so far, going from the White House to Facebook. What has led you down this path? Discuss the different work environments, and the process of adapting to the change between the two.

I have been very fortunate to have had these experiences, and am thankful for the start I got in college to get here. Having the opportunity to work at both the White House and Facebook has been incredibly valuable – it has given me a close view into the ways that both organizations make key decisions.  The end goal of each is to create value for people – and both are incredibly effective at doing just that. But they do so in very different ways; whereas the White House works through a bureaucracy across the federal agencies to develop policy recommendations or make decisions, Facebook operates on a somewhat different timeline and structure. Both systems are highly influential and impact millions or billions of people with every action they take – but the two systems actually teach you very different things about decision-making and management.  That’s been the most interesting dynamic for me, and while it takes time to adjust to any new experience I have really enjoyed my experience at Facebook.

Your research interests during grad school focused on the practical limitations of technological privacy due to competing stakeholders. Where did your interest in this topic come from? What about that intersection fascinates you?

Privacy is one of the most critical issues to consider in the context of modern commerce over the Internet – perhaps the most critical. The Internet ecosystem and much of global commerce are driven by data and, to a large extent, personal information. Companies and government organizations that collect such sensitive personal information have to take care to give individuals the appropriate access to and control over their data. Otherwise, they both run the risk of losing public trust, and the Internet ecosystem can be eroded. This understanding has driven me to this field. Without consumer privacy, the Internet as we know it would not exist at all. I first started examining privacy in detail at Cornell, under the supervision of Professor Stephen Wicker. Previously, I had primarily studied fields in mathematics, including optimization and nonlinear programming. As I became more interested in the field of information theory, I saw the fundamental relevance of privacy and computer security. I found that both government and industry have to take steps to make sure they transmit, use, and store sensitive data in ways that respect consumer privacy. Some of that falls into cybersecurity, and making sure that organizations uphold an adequate level of data protection. But part of that also comes down to the choices those organizations make about consumer data. When the Snowden disclosures occurred some years later, the public eye really turned toward these issues in a big way.

Facebook works diligently to protect its users’ privacy, and the company’s development of public policy on privacy issues reflects the steps it takes internally to assure protection. This work starts with making the right choices for internal data policies – that is, with respect to the kinds of data we might collect and how we might secure it on our systems to ensure that malicious hackers do not gain illegal access to it.  But it also means that we need to actively survey the public’s current sentiment around privacy and security issues, and try to address these sentiments on our site. That, for a large part, is my job – to understand public sentiment and, working with our team in California, support the development of the policies and standards that we uphold on our site. That policy development process manifests itself in a number of ways – including in how we assure privacy and security for users on the platform, or how we might deal with uploaded content that doesn’t meet the standards of our public statement of rights.

How does a company or government agency balance privacy and the need for rich data?

I think both kinds of organizations – the federal government and tech companies – think hard about collecting personal data before they do it. The reason for that is simple: at the end of the day, the U.S. government and publicly traded companies are responsible to their individual constituents – whether the American people, or individual users of Facebook. That brings a very real element to balancing privacy. Companies and governments always have to take care to secure and protect data, and live by certain principles in their use of that data – principles that are known to and agreed upon by the persons to which that data pertains.

In my view, people play an important role in ensuring their privacy. Every day, we make choices about the digital presence we create for ourselves. Those choices define our online activity, but also inherently our digital privacy and security. For instance, some people might decide against using online banking or payment applications because they do not wish to share their financial information. Ultimately, I find that organizations collect data to make the world more interconnected and deliver richer content and greater value to us. That’s the fundamental nature of the Internet ecosystem, and it goes beyond only the federal government or technology companies, and extends to health care, finance, and educations – all of these are areas in which organizations are increasingly accessing sensitive data. What is most critical is that they give consumers the appropriate choice and control over how their data is used.