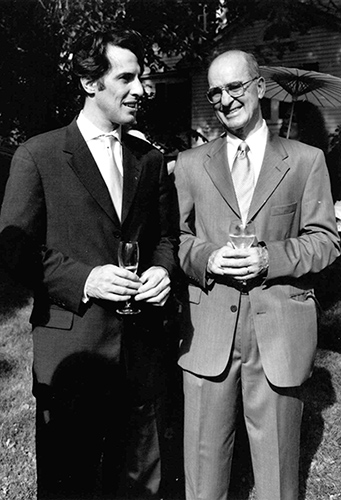 Professor Emeritus Charles Harris Knapp, 86, passed away at home on Thanksgiving Day surrounded by his family and loving wife of 62 years, Charleen Gaudet Knapp. Over the course of his 40-year career at UConn, Dr. Knapp enriched and shaped the

Charlie (or “Red” or “Harris,” as he was variously known) was so eminent in his field, that a handwritten note recommending a student to a graduate program at another well-regarded university signed only “Charlie” was sufficient; no letterhead needed. Colleagues and former students remembering Charlie reiterate his traits as an educator, mentor, and researcher calling him “a true gentleman,” showing people “how to treat others,” “the best teacher,” and never seeing “him lose his cool.”

A lifelong Yankees fan, Charlie was born in New York City, but moved with his family to Coventry, CT at an early age. As an Electrical Engineering undergraduate at UConn, he was the first University Scholar from the School of Engineering and member of Tau Beta Phi, Eta Kappa Nu, and Sigma Xi engineering honor societies. Upon graduation in 1953, Charlie served two years of active duty in the U.S. Air Force before earning his Master’s degree from Yale University and working for RCA and IBM. He returned to UConn in 1958 and became the first candidate awarded a Ph.D. in Electrical Engineering.

Charlie had many interests outside of academia. He began running in his late 20s, was an avid gardener, active member of the Storrs Congregational Church serving in many capacities including his favorite, singing in the choir for more than 40 years, and spending time with his four children and their families.

In 2012, the Knapp children honored their father with a generous donation establishing The Charles H. Knapp Associate Professorship in Electrical Engineering. Explaining the decision to create an associate professorship, typically given to newer, upcoming faculty, Charlie said, “The younger professors have the freshest education and ideas and are looking for places where they can grow. This professorship will give its holder an edge and will be very helpful in retaining the best associate professors. It is important for the university and the college if we can keep them here, and it’s good for local industry, as well.”

During his lifetime, Professor Knapp enriched the lives of countless students and colleagues, family and friends. Through their lives and his eponymous professorship, his legacy and memory will endure for generations.

Donations in his memory may be made to: The Charles H. Knapp Associate Professorship in Electrical Engineering, c/o The UConn Foundation, 2390 Alumni Drive., Unit 3206, Storrs, CT, 06269-3206