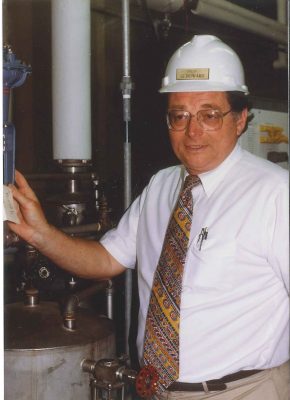 Dr. G. Michael Howard, 81, professor emeritus of chemical engineering and beloved husband for 57 years of Jane Deans Howard, passed away on December 21, 2016. Professor Howard served as associate dean for UConn Engineering, as well as department head of chemical engineering during his 36 year tenure as a full time professor.  Born in Washington, DC on July 4, 1935, he graduated from the University of Rochester in 1957. He subsequently earned his master’s degree from Yale before coming to UConn to receive his Ph.D.

In 1961 he began his 50 year affiliation with the chemical engineering department at UConn, which is now called the chemical and biomolecular engineering department. Throughout Dr. Howard’s time at UConn he was a favorite of his students and well-respected by his peers. He received numerous teaching honors and awards, including the Outstanding Teacher Award from the Student Government, two-time winner of the Rogers Corp. Outstanding Teacher Award in Chemical Engineering, induction into the UConn School of Engineering Academy of Distinguished Engineers, and the Mike Howard Educational Excellence Fund in Chemical Engineering was established by his peers and former students upon his retirement.

While at the University of Rochester, Mike was a crafty undersized center on the basketball team and was coached by Louis Alexander, a former UConn player and coach. Mike was also the captain and number one player on the tennis team. For more than 30 years he was a regular at the lunchtime pick-up basketball games in Guyer Gym on the UConn campus. Mike was a devoted UConn sports fan, particularly of the men’s and women’s basketball and soccer teams, and the football team. He enjoyed serving UConn through various positions on athletic advisory committees.

In 2011 Mike was honored with induction into the Hastings High School Hall of Excellence for his contributions to higher education. Two Nobel Prize winners are in the same Hall of Excellence, and in his induction speech, Mike proudly and humbly shared his belief that if you couldn’t win a Nobel Prize yourself, you could still make a wonderful contribution by striving to lay the groundwork for someone else to win one.

Mike was committed to his family and students, making sure that all knew through his support and generosity that he was there to help them reach their highest potential. He was a lover of crossword and number puzzles of all kinds, had endless knowledge of many subjects, loved trivia games and quizzes, and was known to enjoy a good pun.

Mike is survived by Jane, and his three children, Russell Howard and his wife Christina of Williamstown, MA, James Howard and his wife Kateri of Glastonbury, CT, and Ann Howard Phillips and her husband Todd of Wexford, PA. He also leaves his sister, Helen Howard Harmon of San Francisco, CA, brother and sister-in-law William and Nancy Deans of Acton, ME, eight cherished grandchildren, two nieces and one nephew. His family will deeply miss his wisdom, sense of humor, wit and generosity, particularly at the family gatherings on Candlewood Lake.