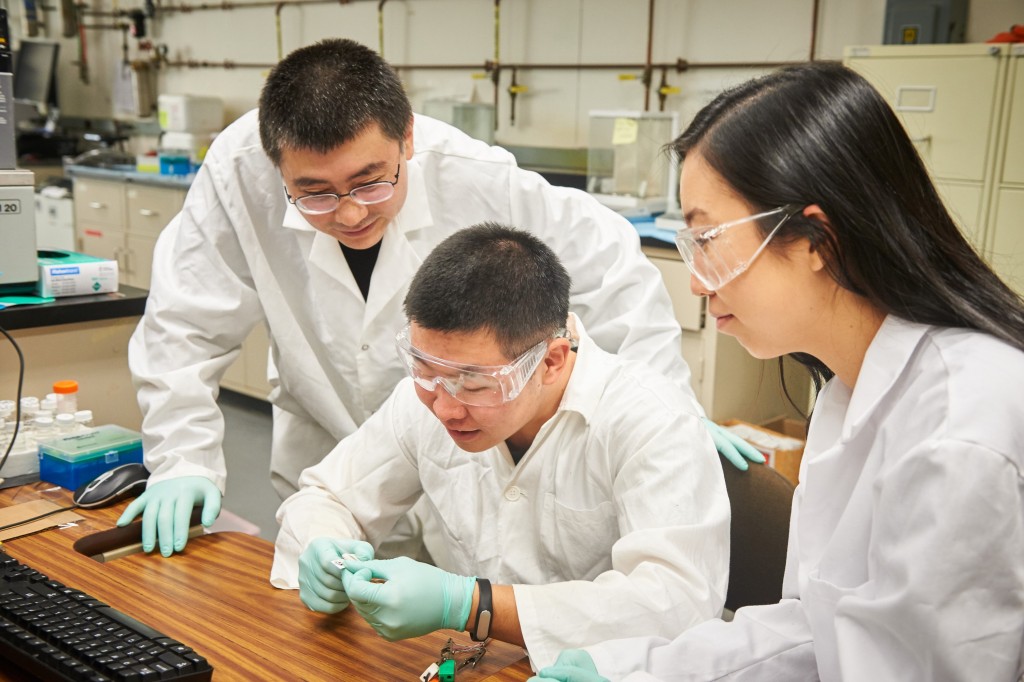 As pesticides or lethal chemical weapons, organophosphates (OPs) are deadly compounds regardless of their intended target. They comprise 40 percent of the pesticides used worldwide and recently, in the form of sarin nerve gas, were used with devastating results in Syria.

Now, a team of researchers at UConn, in collaboration with Professor Changjun Hou of Chongqing University, has developed a sensitive and affordable sensor that can detect organophosphates.

“[Organophosphates] are dangerous, highly toxic, and easy to access,” says Yu Lei, an associate professor of chemical and biomolecular engineering, who began working  to develop improved sensors for OPs while he was still a graduate student.

Organophosphates exhibit their toxic effects on humans by inhibiting an enzyme vital for nerve function, called acetylcholine esterase or AChE. AChE becomes irreversibly inhibited, meaning that exposure to certain levels of organophosphates quickly becomes fatal, as nerves cannot function and vital functions such as breathing are arrested. Those exposed to lower levels are left with lasting negative health effects. The body cannot repair or reverse the damage done.

Since it is the target compound of organophosphates, AChE-based sensors are one way to detect the presence of organophosphates. But because it must be extracted from large amounts of animal tissue, AChE is a very costly component of these sensors. In contrast, the new sensor developed by Lei and Hou utilizes a plant-based esterase, which is much easier to obtain – so easy that you probably have some of it in your own kitchen. The plant-based esterase, or PLaE, can be extracted from wheat flour, soy, or corn, to name a few of its sources. 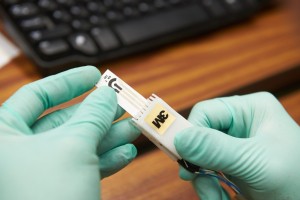 A sensor that can detect toxic chemicals is connected to a cable in the lab. (Peter Morenus/UConn Photo)

The new sensor is a thoughtfully engineered matrix: each element is included for very specific reasons. Chitosan, a plentiful compound derived from the shells of crustaceans such as shrimp, acts like a glue to hold the components of the sensor together and also binds the sample, ensuring everything is in close contact. Gold nanoparticles are added to aid in electrical conductivity and electron transfer without interacting with or altering the sample itself. Graphene nanosheets are included to ensure that components are all interconnected, in order to increase conductivity and durability. Last but not least, the matrix includes the plant-based esterase as the bio-recognition element to interact with organophosphates. It is the enzyme activity change in the plant-based esterase that is monitored by the sensor, and read using a meter.

In trials with samples of food that have been “spiked” or have had small quantities of organophosphates added to them, the sensor has been able to detect minute quantities, down to parts per trillion, showing that not only does the sensor work, but it is extremely sensitive.

Future development will aim to miniaturize the sensor into a disposable test strip form, similar to a commercial glucose monitoring strip used to monitor blood sugar levels for diabetics. Also like a home-use glucose monitoring device, the organophosphate sensor will have an inexpensive meter to read results.

Another interesting quality of sensors developed by Lei and Hou is that, with a few relatively simple modifications to a standard ink jet printer, a number of test strips can be printed easily and cheaply on a single sheet of paper, at the cost of a few cents per strip. These sensors could be mass produced and used in locations where the high cost of current sensors prohibits close organophosphate monitoring today. The new sensors could play a significant role in empowering populations in countries with less stringent policies on pesticide use; they could also be used to detect chemical weapons – a growing concern in war-torn areas.

Currently, Lei’s group – including visiting graduate student Jing Bao from Chongqing University and UConn biomedical engineering Ph.D. students Qiuchen Dong, Xiaoyu Ma, and Jun Chen – are developing a reusable organophosphate sensor using a genetically engineered protein. This work has been made possible through collaboration with Professor Wilfred Chen of the University of Delaware. The sensor will simply need a wash with buffer before it can be reused, adding further to the ease of use and detection of these deadly chemicals.

“We need to move forward, to collect real water and food samples and test them,” says Lei. “Organophosphates are used widely, they can be purchased from any agro supply store. The U.S. and Europe are well controlled and have very strict policies on organophosphate use, but food comes from all over the world these days.”

Simple to use and affordable, just as the blood glucose strips can be a life-saving device, the Lei group’s organophosphate sensors have the potential to put life-saving information about food, water, and national security into the hands of people worldwide.