According to the Federal Highway Administration (FHWA), more than 30 percent of the 600,000 bridges in the U.S. have exceeded their 50-year design life, requiring an investment of $20.5 billion annually for maintenance, repair, and rehabilitation.  But what if you could significantly reduce this cost with the development of novel repair and rehabilitation methods that, at the same time, avoid the kind of construction zone traffic interruptions that make rush-hour commutes a nightmare?

Researchers at the University of Connecticut are studying an innovative method for repairing corrosion-damaged steel girders using an advanced concrete material. They’re focusing on the common corrosion damage at the ends of bridge girders, which may significantly reduce a girder’s load-bearing capacity. This damage is caused by years of exposure to water and de-icing road salt commonly used this time of year.  The project, which was funded by Connecticut Department of Transportation (ConnDOT) and supported in part by the U.S. Department of Homeland Security (DHS) and industry collaborators Lafarge and Infra-Metals, promises to dramatically reduce repair costs and considerably simplify the rehabilitation process. 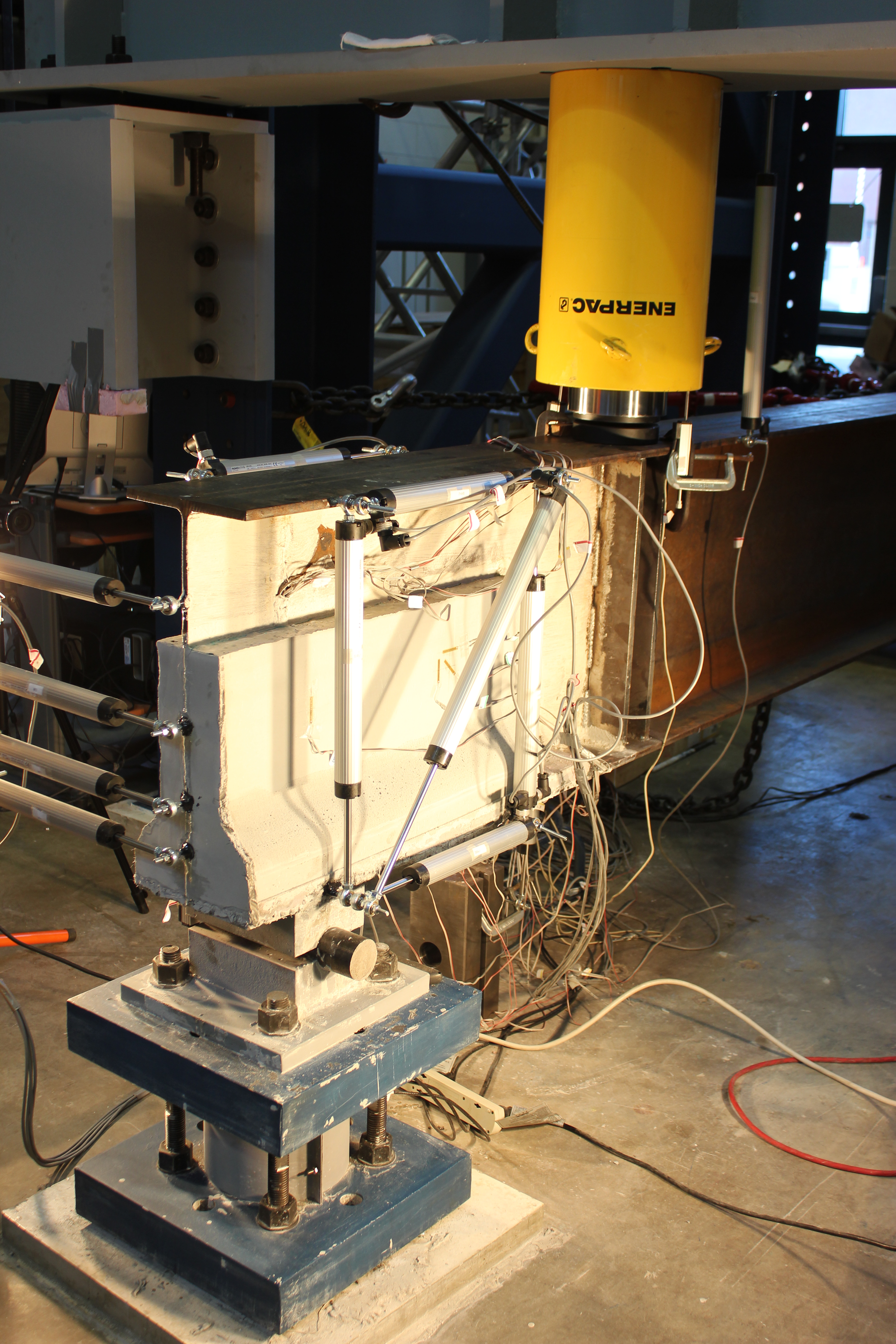 “Traditional methods for repairing corrosion-damaged steel bridges are so costly, complex, and time-consuming that necessary repairs are often delayed,” said Dr. Arash Zaghi, assistant professor of civil and environmental engineering and the principal investigator of the research project.

A number of factors make the traditional method of bridge repair so cumbersome – for instance, there’s preparing the surface of the steel girders, which can include sanding and drilling holes for bolted additions. The need to remove existing paint is another major impediment of current repair methods.  Because the majority of structurally deficient bridges are old enough to have lead paint, extensive – cost-prohibitive, sometimes – abatement protocols should be stringently followed. One of the most costly girder-end repair tasks is the jacking of the entire superstructure, which can account for more than 70 percent of the project’s costs. Also, rehabilitation work often requires the closure of one or more lanes along the roadway, or even the entire bridge.

The problem of deteriorating bridges, and the vast resources needed to repair them, is well-known to the public. President Barack Obama addressed it in a 2013 State of the Union address:

“[T]onight, I propose a ‘Fix-It-First’ program to put people to work as soon as possible on our most urgent repairs, like the nearly 70,000 structurally deficient bridges across the country.”

In its infrastructure report card for 2013, the American Society of Civil Engineers (ASCE) gave the nation’s bridges a grade of C+. Or, to put the situation in numbers:

But using Ultra-High Strength Concrete (UHSC), an advanced, low-porous construction material, to repair the corrosion-damaged steel girders could dramatically reduce the resources needed for such repairs. As part of this alternative repair technique, being experimentally and analytically studied at UConn, UHSC panels are cast over the beam’s corroded web plate. This method, the researchers found, requires minimal surface preparation, as no paint removal is required. No jacking is required, since the rehab work can be done when bridge is in service.  And the process is so simple and straightforward that construction time and the need for lane closures are significantly reduced.

So what makes UHSC so much better than traditional concrete? Due to an optimized mixture design, it has a compressive strength greater than 22,000 pounds per square inch and excellent durability properties. As a result, UHSC can withstand much greater forces, and has a much better resistance to environmental attack than conventional concrete, which has strength of about 5,000 pounds per square inch. The concrete used in this study was an off-the shelf product, Ductal JS-1212, supplied by Lafarge

Although it’s been around for about 20 years, the benefits of UHSC are just starting to be widely recognized.

“Especially in the last year, the use and implementation of UHSC in the construction industry has significantly increased and is gaining momentum,” said Co-Principal Investigator, Dr. Kay Wille, who’s also co-chair of the international symposium, which takes place later this year in New York.

Playing a key part in the research is Kevin Zmetra, PhD candidate at UConn and a recipient of a STEM Fellowship from the Department of Homeland Security. The fellowship paid for his tuition, half of his university fees and provided a stipend. He worked on the project with his advisor and the project Principal Investigator, Dr. Zaghi, and Dr. Wille.

“I became involved in the bridge project a few months after beginning the fellowship,” Zmetra said. “Dr. Zaghi had the project available and required a PhD student familiar with large scale experimentation and finite element modeling.  I had performed both while working on my Master’s Degree.  I thought the project had great potential to solve a critical issue facing our nation’s infrastructure.”

The researchers constructed loading experiments on three one-third-scale girders, modeled after one from an actual bridge in Connecticut.  One was an “undamaged girder” that was tested as the benchmark. Another specimen served as the “damaged girder.” To simulate corrosion damage, the researchers reduced the thickness of the lower portions of the girder’s web (the vertical plate of an I-beam) and the bottom flange (the horizontal plate) by 66 percent.  A third girder was also constructed with the same level of simulated corrosion – this is the girder the researchers used to directly test the effectiveness of the repair method using UHSC.

With the successful completion of the first phase of the study, the researchers will further pursue their discoveries in the second phase of their research. This includes a more extensive look at plate-girder beams and the potential to completely eliminate the need to jack the bridge and the potential to reduce lane closures. They will also use salt-fog testing to investigate the long-term durability of these repairs.

“This repair technique has the potential to address the critical problem of corrosion- damaged steel bridges around the nation in a creative way,” Zaghi said. Once this methods is established, state and federal agencies could restore many bridges at a fraction of the cost and time, and increase the safety of our transportation infrastructure. “The issue of the aging infrastructure in the U.S is a complex one, and traditional methods are simply not the best way to address it – we are just too comfortable with them. We need to promote revolutionary approaches.”