People with attention deficit hyperactivity disorder (ADHD), studies suggest, are more creative and more willing to take risks. A team of researchers say it’s those traits that are exactly what the field of engineering needs, but the traditional model of teaching is driving away potential pioneers in the field.

With funding from the Research in Engineering Education, a program of the National Science Foundation (NSF), they’re embarking on a study designed to find a better way to train these students.

ADHD is a very complex brain executive function impairment resulting in poor time management, lack of attention and being prone to procrastination when tasks are considered boring. But ADHD is also strongly associated with ability to think of many diverse ideas quickly in unconventional ways. Recent studies suggest that, because divergent thinking and risk-taking are critical to survival, genes associated with ADHD have played a crucial role in the evolution of humans. 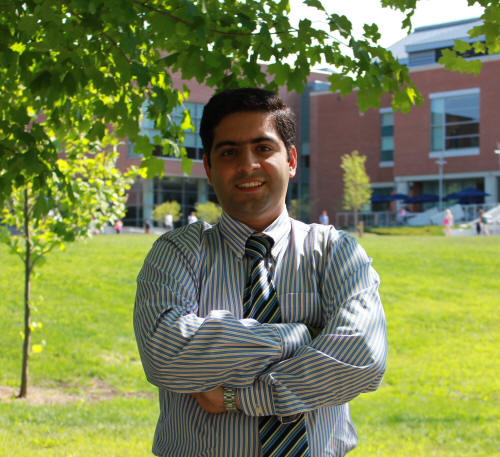 Finding solutions to the kinds of complex problems that engineers often grapple with requires creative, non-linear thinking. But traditional engineering training rarely takes advantage of these strengths, say the researchers, who come from the fields of engineering, education, psychology and psychopharmacology. It tends to be rigid and sets very narrow goals for students, said Arash E. Zaghi, assistant professor of Civil and Environmental Engineering. Students with attention deficit hyperactivity disorder (ADHD) – while no less intelligent than their peers – are stymied by the traditional model of engineering education.

“It doesn’t leave enough room for creativity,” said Zaghi, the principal investigators of the study. “We’re so comfortable with our instruction now that we haven’t recognized that we aren’t sufficiently fostering creativity.”

Zaghi was diagnosed with ADHD when he was 32. Although drawn to engineering, Zaghi felt frustrated by the traditional methods of teaching engineering, with its inflexible and unprovocative curriculum and overwhelming problem-solving assignments. As a teacher, he has made it a point to encourage students to experiment and come up with unconventional solutions.

“I always leave room for crazy ideas,” he said.

The first-stage research project has received a competitive RIGEE (Research Initiation Grants in Engineering Education) grant for about $150,000 for two years from the National Science Foundation. The study is designed to compare the difference in creative thinking between engineering students with ADHD and other engineering students, and what factors might hinder the success of those with the condition. As part of the study, the researchers will administer the Torrance Test of Creativity, the most widely used metric for creative thinking.

In addition to Zaghi, the research team consists of education theoreticians, educational psychologists, gifted education specialists, academic advisors, and a consultant in psychopharmacology. Among them is Dr. Sara Renzulli, a learning specialist for UConn’s Counseling Program for Intercollegiate Athletes who was also diagnosed with ADHD. She said students with ADHD who ultimately succeed scholastically often do so by finding their own ways of capitalizing on their unconventional thinking. Renzulli said she’s open with her students about her own experience with ADHD, which makes her more approachable to others who have it. That’s important, she said, as there’s a stigma attached to the disorder which makes many students reluctant to seek help.

“Showing a human side of me has caused a lot more people to come and talk to me,” she said. 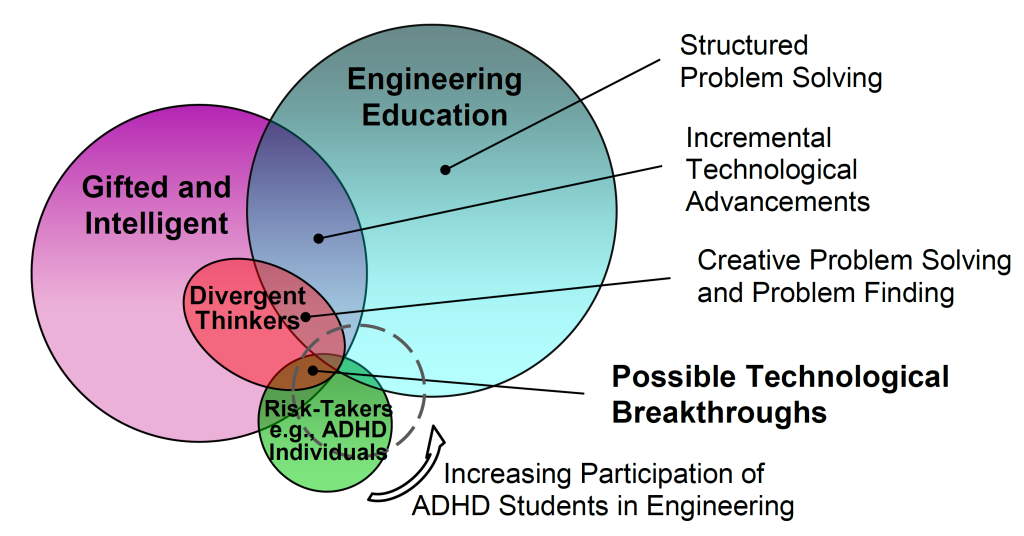 According to recent studies, 4 to 7 percent of the population has ADD or ADHD. Because of increasing awareness of the condition, diagnoses continue to increase. Approximately one-third of adolescents diagnosed with ADHD do not receive their high school diploma; the drop-out rate for the general population is about 5 percent.

And of those with ADHD who do go to college, the demographic is severely underrepresented in the field of engineering. One study found that only 3 percent of college students with ADHD were enrolled in engineering programs, compared to 76 percent enrolled in colleges of arts and sciences.

At the high school level, Renzulli said, academic advisors may be unaware of the nature of traditional engineering training and unwittingly send creative students with ADHD into programs that are a poor fit.

“[Students with ADHD] are looking for things that are hands on, so an advisor will say ‘You should go into Engineering,’” she said.

With the funding, the research team expects to recruit approximately 15 engineering students with ADHD characteristics. They will also use surveys to evaluate how the grades of the students with ADHD correlate with the classes they enjoyed the most.

The research team also includes Distinguished Professors Sally Reis and Joe Renzulli, both internationally renowned scientists in the area of Education Psychology. Renzulli is recognized for his work in the field of gifted education and Reis is known for her research on intellectually gifted children who also have some form learning difference.  Dr. Joyce Kamanitz, a psychopharmacologist, will assist the research team determine whether ADHD medicines – which help the academic performance of these students – are affecting their creative thinking.

Dr. Stephanie D’Souza, another PI in the study, is a researcher with the A.J. Pappanikou Center for Excellence in Developmental Disabilities who has focused on academically gifted university students with learning differences. The study is the first step in getting educators to see that students with ADHD are just as capable of learning as other, but require different methods.

“I would guess that there are some students in engineering who do have special learning needs but are not talking to their professors about these needs because they are afraid of being seen as incompetent, lazy, or stupid,” D’Souza said. “One of the goals of this project is to help dispel some of the myths about individuals with ADHD and help not only professors, but also the students themselves, see that ADHD does not mean stupid or lazy, it is simply a different learning need.”