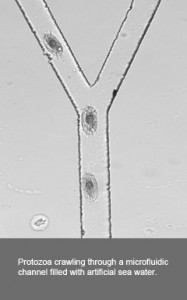 “Through the detection of chemical trails, researchers have established that ants can sense and follow the migration paths of other ants,” says Kristina. “So, we want to know, do protozoa coordinate their movements in a similar way?” Despite their lowly place near the bottom of the food chain, protozoa play an important part in nutrient cycling. “Protozoan migration patterns influence transfer of nutrients through the food chain,” explains Grant. “If we can figure out whether chemical trails determine the movement of protozoa, perhaps we can predict or even manipulate their migration.  At the very least it would be better understood.”

Their first task was to design and build a microfluidic device to observe the sequential movement of individual protozoa. “We wanted to force a single protozoan to choose between two paths at an intersection. To do this, we built a device with diverging channels and constrictions that permit only one protozoan to pass through at one time,” Grant explains.

The team also modified its observation method to capture dynamic activity.  “Originally, the observation device was set up so that a microscope would take pictures of the intersection and the two reservoirs at the ends of the fork. But we needed to be able to capture the movement of the protozoa in a more continuous manner, to determine the timing of migration choices,” Kristina explains. “So we exchanged the still-frame camera shots for a video recording of the device from end to end.”

The researchers then selected their test subject. “Protozoa move in a way that is adapted to their environment; benthic protozoa live among the bottom sediments of a water body, so they more or less ‘walk’ on surfaces, whereas pelagic protozoa live within open water and propel themselves through liquid,” says Kristina. “Naturally, we selected a benthic protozoa, Euplotes vannus, because we needed the protozoa to be able to move along the surface of the device.”

Coping with the Unexpected

It was then, at the onset of their research, that Grant and Kristina began to run into difficulties. “Well, I guess there’s no other way to describe it: we couldn’t keep our protozoa alive long enough to consistently complete the Y-maze,” says Grant with a laugh. “Euplotes vannus, which can typically be found inhabiting the soils of swamps and rivers, just didn’t seem to adapt very well to the environment we were trying to set up for them in this experiment,” adds Kristina. “It’s not surprising, since even the smallest environmental fluctuations can wipe out an entire protozoa colony. In the end, we wound up spending most of our time trying to perfect the procedural method for culturing and harvesting live protozoa.”

Grant notes that researchers learn to take things with a grain of salt. “Although this study didn’t go in the direction we intended, it was by no means a loss,” he continued. “Our findings have, without a doubt, contributed to establishing procedural guidelines for maintaining a laboratory environment habitable by Euplotes vannus. As a researcher you are always learning, in this case we were learning how to deal with ‘protozoa death issues’ and we’re okay with that,” he concludes.

Kristina, who graduated with her B.S. on May 8th, plans to work for a few years before going back to school to get an MBA. “I’d really like to put my chemical engineering background to good use in a business environment; after getting my MBA I can see myself as a ‘morally conscious’ businesswoman,” she says. “I’m interested in trying to find a balance between profitable business and environmental sustainability. For example, I really admire the Sierra Nevada Brewing Company; they built their production plant one mile away from a train depot to allow for very low vehicular transportation. Reducing environmental impact is very important to me.”

Meanwhile, Grant will continue his doctoral studies in Environmental Engineering at UConn. He, too, hopes to contribute to environmental sustainability. “The knowledge I have gained by crossing the boundary into biological research will be priceless. By learning how to use microfluidic devices, I can apply these strategies to environmental research. I’m very interested in investigating the predictability of red algae blooms, which have a devastating impact on marine environments. Knowing how to use devices to analyze the movements and growth of microscopic organisms means I can now apply these methods to algae research.”