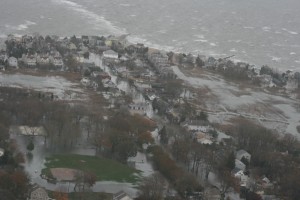 Connecticut’s vital infrastructure will drown over the next few decades unless the state does something to stop it. And, the first step is improving flood maps, according to UConn’s Manos Anagnostou.

Anagnostou, professor of civil and environmental engineering, and his colleagues have been working on a model that can predict inland flooding along creeks and rivers, as well as flooding along the coastline and harbors. Eventually the model should be able to simulate flood risk down to the scale of individual neighborhoods.

Connecticut legislators heard about Anagnostou’s project and others during a briefing at the Connecticut Institute for Resilience and Climate Adaption, held Thursday, Oct. 29, at UConn’s Avery Point campus.

The maps currently used by the Federal Emergency Management Administration (FEMA) to assess flood risk are like a paint roller compared to the UConn model’s fine brush, said Anagnostou, who is also working with the agency to integrate sea level rise into the federal maps.

Legislators said the information generated by research and projects led by the institution would give them another tool to help citizens and regulators understand the risks Connecticut communities face.

“Every time you get a significant storm, you’ll get whacked. How do you want to deal with that?” said Rep. Jonathan Steinberg of Westport, which has large tracts of valuable older homes in vulnerable, low lying areas. 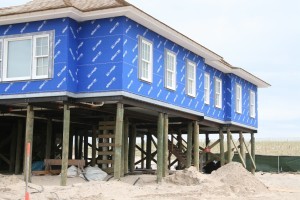 Preparing for future storms, homes were rebuilt along the coast after Hurricane Sandy. (Photo courtesy of Kara Bonsack UConn CLEAR)

Other research projects discussed at the briefing included wave prediction, tidal flow constrictions engineered to be environmentally sensitive, and a proposal to win federal funding in the National Disaster Resilience Competition. The application asks for $115 million to move roads and walkways in low-lying areas to nearby higher ground in order link areas that might otherwise be cut off by rising waters.

“This is part of our new reality,” said Robert Klee, commissioner of the Department of Energy and Environmental Protection (DEEP). 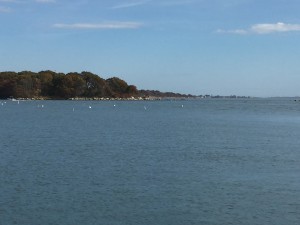 The institute is a collaboration between UConn, DEEP and the National Oceanic and Atmospheric Administration. The goal is to bring together experts from a wide range of disciplines—scientists and regulators, lawyers and engineers—to develop smart, effective solutions to practical problems that affect many municipalities in the state.

“It’s the most unique state government—state university collaboration I have ever seen,” said Jeffrey Seeman, UConn’s vice president for research.