In September, Mechanical Engineering senior and ROTC Cadet Douglas Palmer was awarded the Army Achievement Medal for Meritorious Achievement. Typically awarded to Active Duty, National Guard and Army Reserve soldiers, the award was presented to Palmer in large part due to his performance during the Leader Development and Assessment Course (LDAC) held during summer 2011 at Joint Base Lewis-McChord, WA, which is shared by the U.S. Air Force and the U.S. Army.

According to Elizabeth Little, program assistant in the Military Science Department, “Reserve Officers’ Training Corps (ROTC) cadets attend LDAC for 29 consecutive days and are trained and tested in soldier skills. Of more than 6,600 cadets nationwide, Douglas Palmer’s performance ranked in the top one percent overall. He also ranked first in his regiment and received a variety of other awards for leadership, achievement and physical fitness.” 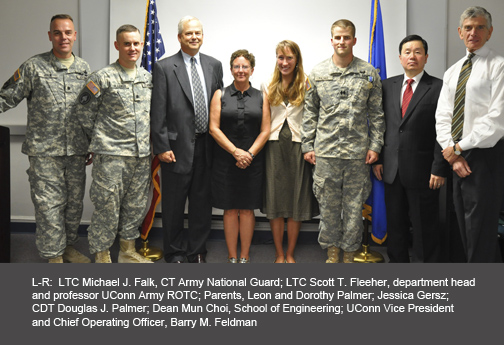 Of the more than 90 students across campus who are involved in the Army ROTC program at UConn, 13 are enrolled in engineering degree programs.  Students may take ROTC coursework without committing to completing the program.  Once they commit, most enter active duty.

Palmer’s decision to pursue a degree in mechanical engineering is rooted largely in a special academic enrichment track offered by his high school in Hebron, CT.  RHAM High School participates in a national freshman-to-senior year program called “Project Lead the Way.”   Palmer explains that Project Lead the Way introduces students to engineering concepts that, paired with regular math and science coursework, prepares them for college coursework in engineering. “Mr. [David] Ruddick taught the class, and the experience turned me on to engineering.  I had the opportunity to use CAD to model, and then to build, a robotic arm thanks to the program.  I was also very interested, as a little kid, in taking things apart and reassembling them,” he notes.

When it came time to consider his college choices, Palmer applied to and was accepted at both UConn and Norwich Academy, a military college. The decision to attend UConn was difficult, but Palmer said his father convinced him to attend UConn to receive a broader education while pursuing his interest in military science through the Army National Guard 250th Engineers.

As a freshman, Palmer was enrolled in the EUROTECH program, which enables students to earn two bachelor’s degrees, one in an engineering discipline and one in German Studies.  He spent his sophomore year living and attending school in Heidelberg and Stuttgart, but when he returned for his third year he opted to complete just the engineering degree.  At that time, he also enrolled in the Army ROTC program, which he notes is growing at UConn: exploding from 25 cadets when he joined ROTC to 94 today.

Managing the demands of both rigorous programs is a challenge, but Palmer said it has been very worthwhile. “It requires extreme time management. You have to plan better to fit everything into your schedule. As a commander, I have to commit 20-25 hours, minimum, per week to my ROTC responsibilities. It has made me become better organized,” he says, adding, “There have been some sleepless nights.”

ROTC cadets perform one hour of physical training each Monday, Wednesday and Friday at a time when most students are still snug in bed: from 6:00 – 7:00 a.m.  The exercises include push-ups, sit-ups, marches and other physical activities aimed at building strength, endurance and discipline. The physical fitness training is complemented by once-weekly military science classes that, Palmer explains, introduce students to military customs and traditions, operations and tactics, goal setting, communications and other leadership aspects. 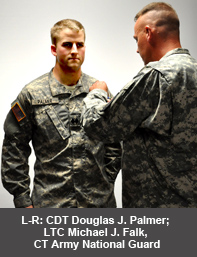 In his leadership role as a battalion commander, Palmer also oversees 182 ROTC cadets from UConn (Alpha Company) and the University of New Haven (Bravo Company).  He plans and executes training exercises conducted every second Friday, and trains and mentors juniors. A part of that mentorship is focused squarely on academics.  Palmer is quick to say that UConn cadets benefit from the long experience and mentorship of Lt. Col. Scott Fleeher, who joined UConn in February as ROTC Commander.

“ROTC stresses the importance of academic performance, and does a great job of mentoring students to assure academic success. Academics are stressed because after the junior year, ROTC students are ‘racked and stacked’ against all other members in the Order of Merit. Forty percent of a students’ performance is based on academics,” he remarks.

When he graduates in May, Palmer will be able to indicate his preference for which branch of the Army he would like to be assigned to, and his first choice will be engineering. While good academic performance weights the decision in his favor, the Army will deploy him to the branch where he is most needed at that time.  Upon graduation, Palmer will also be awarded Distinguished Military Graduate status in recognition of his academic GPA and performance at LDAC.

Looking ahead, Palmer foresees graduate school as yet another means to ensure a successful career.  It’s clear that in balancing the demands of two rigorous programs throughout his undergraduate years, culminating in his commander role in ROTC, Palmer has mastered not only time management but also the important skills that define a leader.