After 22 years of keeping the School of Engineering’s finances on track, Sandy Crosthwaite retired Sept. 25.

Joined by her family, Crosthwaite was honored for her service in the position of Executive Assistant to the School at an afternoon reception at the Information Technologies Engineering Building. 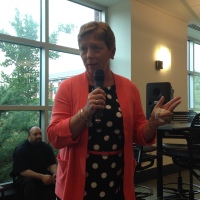 Several of her co-workers spoke fondly of Crosthwaite, who worked with six deans during her tenure.

Provost and Executive Vice President. for Academic Affairs Mun Choi praised Crosthwaite for her dedication to the School.

“She has been a consummate professional and she takes her work very seriously,” Choi said. “She is someone who has made the university better than when she found it.”

He added that her legacy of contributing to the culture of professionalism will carry beyond her tenure at UConn.

“So when you come 22 years from now, and I’m still sitting in my office, I hope, we’re going to say ‘You made an important contribution.'”

School of Engineering Associate Dean Mike Accorsi said that, while many lauded Crosthwaite for her financial acumen, it was her loyalty that stood out for him.

Accorsi also thanked for her some very practical advice she gave him.  Shortly after he was appointed head of the Civil and Environmental Engineering Department in 2006, Accorsi attended his first academic council meeting.

“I must have been pretty green, and Sandy noticed that,” Accorsi said. “The meeting went pretty well, but after the meeting, she pulled me aside and said ‘Mike, you’ve gotta ask the dean for money – everybody else does!’ So Sandy, thank you for that advice. I’ve been using it for the last eight years, and it served me very well.”

In turn, Crosthwaite thanked her co-workers for their friendship.

“I’ve enjoyed working with you all,” she said. “I’ve enjoyed every minute, and now it’s time to spend time with the family, travel and do other things.”

And after more than two decades, Crosthwaite could end on a positive note.

“Today the School of Engineering is still in a plus balance,” she said, to applause.